Please ensure Javascript is enabled for purposes of website accessibility
Log In Help Join The Motley Fool
Free Article Join Over 1 Million Premium Members And Get More In-Depth Stock Guidance and Research
By Steve Symington - Sep 13, 2013 at 10:08AM

SodaStream will soon unveil the latest version of its at-home carbonation systems. Here's what investors need to know.

It looks like Apple isn't the only company looking to give its products a colorful facelift.

Once again, as it did with its previous-generation Source carbonation systems, SodaStream partnered with renowned designer Yves Behar to create Play, which will be available in six colors at stores next spring.

The new system definitely boasts a sleeker profile than SodaStream's existing offerings, and the press release also points out it has "refined mechanics ... [which] allow the high-gloss slider column to automatically return to the original position after being pressed."

What's more, the new system will work with either SodaStream's 60L or 130L CO2 cylinders, providing greater flexibility for users. In addition, the new carbonating bottle "easily locks into place with a single-push motion," and will be available in a one-liter size as well as a half-liter "to-go" version.

To be honest, I don't personally own a SodaStream system in my home, but apparently these new features further streamline the already-simple process of at-home carbonation.

And if there's one thing consumers love on a universal basis, it's simplicity.

By the same token, however, consumers also enjoy having relatively simple choices made available to them, which is why SodaStream Play will enable consumers to mix and match the colors of the system's head and base, which in theory should allow people to more effectively incorporate Play into the aesthetics of their kitchens. 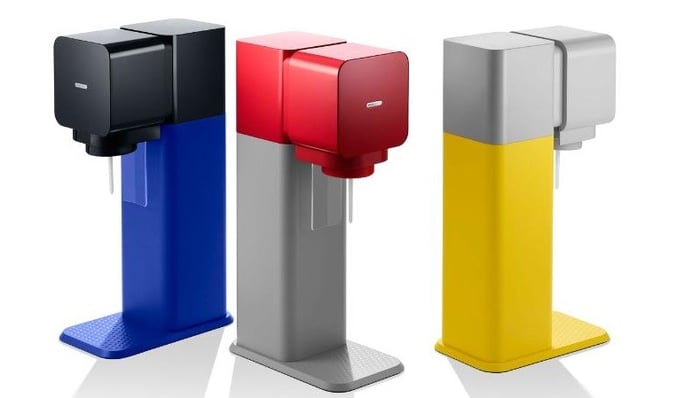 Will mix-and-match color schemes push a large enough number of consumers off the fence and significantly move SodaStream's revenue needle? Probably not.

But at least die-hard Chicago Bulls fans can finally customize an at-home carbonation system to appease their obsession.

Here's why Play could actually make a difference
In all seriousness, though, Play should be able to offer at least two big benefits to appease skittish SodaStream investors going forward.

First, without offering any specifics, the press release states that Play will be offered at "a price point that will appeal to a larger segment of the market."

As it stands, the Source currently starts at a suggested retail price of $99.99, a relatively steep price for someone who's not entirely on board with the company's broader value proposition.

If SodaStream can sell Play at an even lower price without completely destroying margins -- remembering that much of the company's real profits can be owed to its razor-and-blade-style business by refilling CO2 cartridges and flavor packs -- this even simpler system could go a long way toward convincing more consumers they should ditch traditional soda juggernauts like Coca-Cola and PepsiCo (PEP 0.40%).

Second, recall that despite the fact that SodaStream absolutely crushed earnings estimates (again) with its second-quarter revenue and earnings-per-share growth of 28.5% and 33.3%, respectively, investors found themselves questioning the company's long-term resolve after reports surfaced in July that management may have been quietly trying to sell the business over at least the previous three months to no avail.

Apparently, according to the New York Post, PepsiCo was most notably involved in those discussions and only interested in buying SodaStream's massively profitable CO2 refill business -- something I had pointed out a month earlier simply wouldn't make sense (regardless of whether Pepsi wanted the entire business or not) when we consider such a move would both cannibalize Pepsi's existing bottle-and-can-centric operations, as well as anger bottlers who rely on Pepsi's current business model to survive.

As a result, SodaStream's Play stands tall as an encouraging long-term move by management to continue building their business en route to the previously outlined goal of nearly doubling sales to $1 billion by 2016.

If that happens, and with shares of SodaStream currently trading at 29.3 times last year's earnings and 20.4 times next year's estimates, the stock could prove an absolute bargain at today's levels.