Theater stocks might be better positioned than you think.

Are there any investors left who like theater stocks? Not judging by the data in Motley Fool CAPS. I think that's a mistake. To me, theater stocks look like an interesting and potentially lucrative way to play the ongoing comic book movie boom.

So why aren't other Fools interested?
Box-office results are notoriously difficult to predict. Worse, as the following chart shows, the end of the summer movie season takes a huge toll on the major chains: 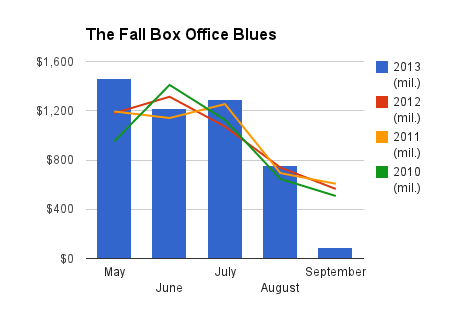 Think of it like retail. Just as Black Friday is huge for sellers of toys and electronics gear, May to July is a crucial time for theater operators. Business has been good lately, thanks in large measure to the increasing popularity of comic-book movies.

For example, Iron Man 3 led the U.S. box office to an astounding $1.46 billion in total receipts, up nearly 24% year over year. This month hasn't been as a fruitful: Domestic theater grosses aren't even a fifth of seasonal norms. As of this writing, horror flick Insidious: Chapter 2 leads the way with just $41 million at the U.S. box office.

Coming soon to a broker near you ...
Nonetheless, theater chain AMC has announced plans for a public offering. The company will join Carmike Cinemas (NASDAQ: CKEC), Cinemark Holdings (CNK -13.44%), and Regal Entertainment (NYSE: RGC) among the list of publicly traded movie houses. Which stock offers the greatest opportunity? Let's review:

Cinemark gets Fools' highest average rating. We don't know how they'd rate AMC since there's been no offering of stock (yet). But even if there were, I doubt investors would give AMC the nod. Why? Chinese owner Dalian Wanda Group plans to maintain tight control of the business via B class shares with superior voting power.

Which brings us back to Cinemark. I, too, like the stock, for the following three reasons:

Finally, I also like the theater business more now than I have in years past. More films are going digital, and theater conversions are well under way. Licensing deals with the likes of RealD and IMAX allow for higher ticket prices. And, of course, the comic book movie boom means bigger crowds paying more per ticket. All of it should add up to the 15% average earnings growth analysts are expecting, and possibly much more.

Fool contributor Tim Beyers is a member of the Motley Fool Rule Breakers stock-picking team and the Motley Fool Supernova Odyssey I mission. He didn't own shares in any of the companies mentioned in this article at the time of publication. Check out Tim's Web home and portfolio holdings, or connect with him on Google+, Tumblr, or Twitter, where he goes by @milehighfool. You can also get his insights delivered directly to your RSS reader.

The Motley Fool recommends and owns shares of IMAX. Try any of our Foolish newsletter services free for 30 days. We Fools don't all hold the same opinions, but we all believe that considering a diverse range of insights makes us better investors. The Motley Fool has a disclosure policy.