In 1991, rapper Naughty By Nature released a single called "O.P.P.," inspired by a conversation with a drug dealer, who said he was "down with O.P.M. -- other people's money."

While I don't intend to draw corollaries between finance and peddling drugs, managing other people's money is a big -- and profitable -- business.

This company's down with O.P.M.
American Capital (NASDAQ: ACAS) is a business development company with a less-than-stellar track record. After trading for more than $40 per share in 2007, the company's business model nearly collapsed in 2009, when it faced a technical default on some of its debt financing.

For American Capital, there is one big bright spot in its portfolio of companies. Its American Capital Asset Management subsidiary is minting money by managing eight different funds. 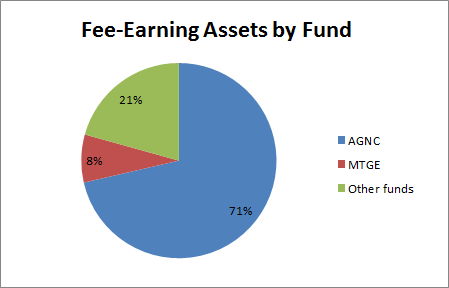 In the latest quarter, American Capital Asset Management paid a $29 million dividend back to American Capital, which is equal to $116 million per year on a run-rate. The dividend matches adjusted earnings before interest, taxes, depreciation, and amortization, according to the second-quarter earnings presentation.

Valuing this subsidiary
American Capital ascribes a $981 million valuation to its asset manager, after writing it down by $75 million in the most recent quarter. The parent company believes that it may be more difficult for its mortgage REITs to collect new fee-generating assets in a rising-rate environment.

A comparable-company analysis also finds the valuation placed on the asset manager to be reasonable. T. Rowe Price (NASDAQ:TROW) manages some $86.8 billion in assets under management, earning an enterprise value of $15 billion from Wall Street. Thus, it trades at an EV/AUM ratio of 0.17. American Capital Asset Management, which requires very little capital from its owner, is valued at an EV/AUM ratio of 0.064.

The Foolish bottom line
As a standalone investment company, American Capital Asset Management, which is worth roughly 19% of all assets in the American Capital portfolio, is a very valuable asset manager. Not only does it require minimal investments, but its earnings power is also cemented with management agreements that allow for consistent fee income, even if its funds deteriorate in value. If its mortgage REITs eventually trade above book value, it could raise new funds and grow fee-earning assets, providing additional upside.

This could be a subsidiary to watch if American Capital follows through with plans to spin off its debt and equity assets into new publicly traded companies. As a pure play, it would be a very attractive investment company that could potentially pay out big dividends to shareholders.

American Capital recently filed with the SEC for a new business development company named "AC Debt," which could be the vehicle through which American Capital separates its debt portfolio from its equity investments including American Capital Asset Management. If given the opportunity to own the asset manager by itself, I'd be a buyer at the IPO.