Joseph Harry
(Jharry1)
Author Bio
I tend to focus more on value than growth, but stocks that tie in both are my favorites. I really like dividends, too. Follow me on Twitter @JosephHarry87 or stop by http://www.anti-icarus.com for more investing ideas.

Society is digitizing everything from music to money. According to estimates from Euromonitor, mobile commerce is expected to grow a whopping 386% from 2012 to 2017, which translates into $400 billion worldwide.

A cashless future?
While it's unlikely cash will ever be eliminated completely, cashless transactions will continue to increase. Visa (NYSE:V) and rival MasterCard (NYSE:MA) will benefit greatly from this trend. These two companies let banks issue debit and credit cards with their names on them, then collect a fee every time a transaction is made using that card. This is an ideal business model for a future with fewer cash transactions.

Visa and MasterCard operate in a duopoly, and together processed almost 60% of the $13.8 trillion of card transactions last year. Both companies have been growing rapidly as well. 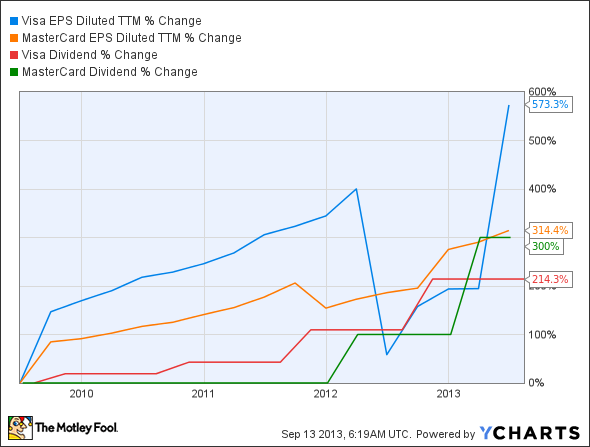 The growth in both earnings and dividends is especially impressive when looking at the balance sheets of Visa and MasterCard. Both companies carry billions in cash on their books, around $3.35 billion for Visa and $5 billion for MasterCard. Neither carries any debt. Of the two, Visa is much larger, with a market cap around $119 billion, as opposed to MasterCard's $80 billion.

The new way to pay?
Visa and MasterCard are looking to further eliminate the use of cash by introducing new technology platforms that will allow customers to make payments with their mobile devices -- not only online, but also in physical stores. This may even eliminate the need to pull out a card. Visa is integrating its payment technologies into mobile devices with its Visa Ready Partner Program, and MasterCard has launched a similar platform called MasterPass.

Visa has separated itself from MasterCard by partnering with the world's largest smartphone vendor by market share, Samsung (NASDAQOTH: SSNLF). Samsung's Galaxy S4 is the first mobile device preloaded with Visa's payWave app. This allows S4 users to make secure mobile payments from both local and global network operators.

The rise of m-commerce
Samsung is now the flagship phone for Visa, and both companies are looking to "step toward a global mobile payment platform," according to Samsung's Won-Pyo Hong. Samsung is not only a leader in smartphones, but also in adopting near-field communication, or NFC, into their devices. NFC is the vital technology that is mandatory for mobile payments to connect and work.

Very few devices other than those made by Samsung have utilized NFC, so it is a perfect partner for Visa. Samsung seems to know that mobile payments are a growth outlet and is seizing the opportunity to get the first-movers advantage. The company isn't looking to stay married to Visa either, stating in a press release that "more payment applets from multiple brands are planned to be preloaded into the embedded secure element in the coming months." It looks like MasterCard could be joining the party soon.

The "leap frog" effect
Visa and MasterCard are also ingraining themselves into developing markets. Matthew Driver, MasterCard's Southeast Asia head, summed the strategy up by stating, "In markets where you don't have that fixed infrastructure in place, it may well be that mobile acceptance is going to be the way to go... There's a great opportunity to leapfrog."

Both electronic payments companies are looking to get in early on these "leap-frog" markets, which never really had fixed infrastructure installed and are leaping right into wireless technology. In Myanmar, for instance, as well as other "frontier markets," people are more likely to get a feature phone or even a smartphone, before a bank account. That's why mobile payments make sense for the future of these countries, which currently rely mostly on cash.

Visa and MasterCard also want to issue debit and prepaid cards in developing nations like Myanmar. MasterCard was the first payment network to issue a license to a Myanmar bank in September 2012. The number of ATMs in the country with access to Visa's transaction network may double to 300 this year, according to Bloomberg. Fewer global cash transactions is the goal.

The bottom line
The two largest electronic payments companies both have great growth prospects going forward, but Visa currently looks like the best bet to capitalize from m-commerce and the cashless trend. It's P/E ratio of about 22.5 makes it slightly cheaper than MasterCard, which trades at around 27.5 times earnings. Visa is also bigger and has a head start on mobile payments thanks to its partnership with Samsung. Plus, Visa was just added to the Dow, giving it that official blue-chip designation. Now is a good time to grab some shares for your portfolio.