Please ensure Javascript is enabled for purposes of website accessibility
Log In Help Join The Motley Fool
Free Article Join Over 1 Million Premium Members And Get More In-Depth Stock Guidance and Research
By Jay Yao - Sep 18, 2013 at 8:07AM

SolarCity has pulled back after increasing nearly 300% from its IPO price; is now the time to buy?

SolarCity (SCTY.DL) is one hot company. The company counts super-entrepreneur Elon Musk as its chairman and Lyndon Rive, an Elon Musk cousin, as CEO. SolarCity shares have rallied over 300% since the IPO. Given the recent pullback, though, is SolarCity a good investment?

A great business model
SolarCity installs solar panels on rooftops and finances them. The company often owns the installed solar panels and sells electricity generated back to the customer. This is a superior business model because as time goes on, solar energy will become cheaper as technology improves and utility electricity prices will head higher.

Since SolarCity makes money from the difference between solar energy and utility prices; it will see increasing margins and a larger total addressable market over time.

Many customers who buy SolarCity panels see cheaper utility bills. The average cost for SolarCity electricity is 15 cents per kWh versus the 18 cents per kWh in California .

Customers pay no upfront cost for installations and can easily transfer the solar panels when they move.

The company also makes it easy for customers to sign up. If customers purchase new homes from Toll Brothers or Pulte, they could elect to have SolarCity panels installed while their homes are built. If they already have homes, they can order SolarCity panel installation from more than 450 Home Depots . 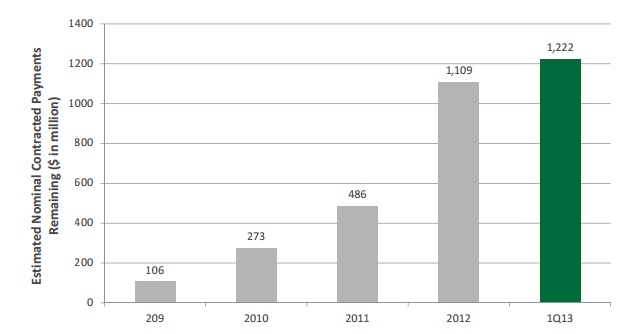 For Q2 2013, SolarCity continued that impressive growth by growing its residential business 144% year over year. The company also had more than 64,000 cumulative customers, up over 97% from the prior twelve months .

SolarCity is just getting started. The company has a goal of reaching 1,000,000 solar rooftop customers in five years. CEO Lyndon Rive plans on fulfilling the target by marketing to new home buyers, working with large corporations, making acquisitions, and raising more capital .

As a sign of progress on that plan, SolarCity made deals with Toll Brothers and Pulte to market to their 120,000 annual new home buyers. The company also has deals with retail giant Wal-Mart to install solar panels on more than 160 stores and with Tesla to supply solar panels for Tesla's supercharging stations. SolarCity recently acquired Paramount Solar for $120 million to market to customers better and may make further acquisitions to increase growth. Lastly the company secured $500 million in capital from Goldman Sachs for a 110 megawatt solar project. The Goldman stamp of approval and extra capital infusion should allow the company to grow faster.

The solar industry at large
Sunpower (SPWR 3.62%) is a solar panel manufacturer that also competes directly against SolarCity. The company manufactures the highest efficiency solar panels in the market with over 24 percent cell conversion efficiency. This high efficiency allows for Sunpower to dominate the consumer rooftop system market where space is limited. In under two years, the company has installed more than 100,000 residential solar systems globally and will benefit from the same trends as SolarCity going forward.

In terms of traditional metrics, First Solar is the best company of the three. It has the best price to earnings ratio and largest profit margins. While not profitable on a trailing twelve month basis, Sunpower should be profitable next year and should see its earnings grow over time.

SolarCity has poor traditional valuation metrics because it is in growth mode. Analysts do not expect SolarCity to make a profit for this year or next year and instead focus more on comparables such as growth of nominal payments outstanding and number of rooftop customers. When viewed through growth lenses, SolarCity shines.

The bottom line
SolarCity has a bright future as solar energy achieves grid parity in more places. Solar energy has already achieved grid parity in many parts of the American Southwest, and Deutsche Bank predicts that the number of markets where solar is at equal or lower cost than traditional energy sources will double over the next five years. It is an enormous market, and it is only getting started. Investors should consider SolarCity for exposure in the growing solar installation sector.

Jay Yao has no position in any stocks mentioned. The Motley Fool has no position in any of the stocks mentioned. Try any of our Foolish newsletter services free for 30 days. We Fools may not all hold the same opinions, but we all believe that considering a diverse range of insights makes us better investors. The Motley Fool has a disclosure policy. Is this post wrong? Click here. Think you can do better? Join us and write your own!