Microsoft (NASDAQ:MSFT) announced a new $40 billion share buyback program yesterday. This replaces an old $40 billion buyback authorization set to expire later this month. The new buyback program has no expiration date, though such plans are often canceled or altered.

Is this good news for shareholders? Likely. Microsoft shares are cheap, the company has more cash than it knows what to do with, and buybacks are a tax-efficient way to reward shareholders.

Corporate managers from across industries have a dreadful history of implementing share buybacks. They ramp up buybacks when shares are expensive and pull away when they become cheap. This is the opposite of what long-term shareholders should want, and ultimately becomes a subsidy for exiting shareholders at the expense of loyal long-term owners.

I checked out Microsoft's history timing share buybacks. Have a look: 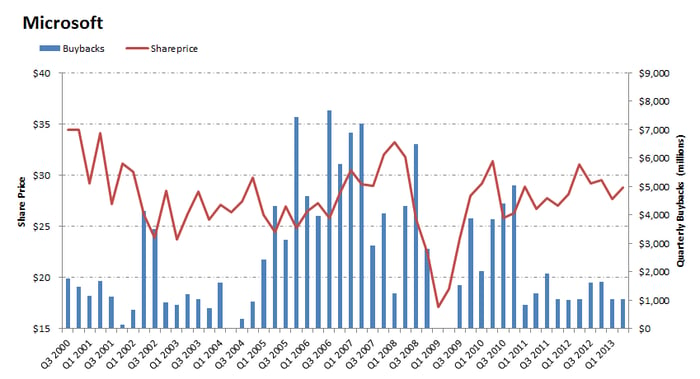 It's a mixed bag.

Buybacks ramped up in 2002 as shares fell. Good.

Then buybacks virtually ceased in early 2009 as shares crashed to multiyear lows. Not smart.

They ramped up again as shares remained cheap in 2010. Good.

Digging deeper into Microsoft's annual reports shows a remarkable consistency. Through all the ups and downs, Microsoft's average price paid for each share repurchased has been between $25 and $30 for the last 10 fiscal years:

Shares currently trade at around $33, so the average return on investment for Microsoft's repurchase has been fairly low. But, hey, it beats cash in the bank.