Battle of the sexes.

One of the most hotly debated topics in economics and sociology is why men still earn more than women.

Some have proposed reasonable explanations for the phenomenon. Others disagree with them.

But while men earn more in absolute terms, the trend in growth is clear: Male wages are in decline.

In fact, men are earning less in real (inflation-adjusted) terms than they did when Richard Nixon was president.

Take this chart, from a recent Census Bureau report: Female real earnings are down a bit from the 2007 peak, but not much -- they're near an all-time high.

Male earnings peaked in the early 1970s, fell, and have stagnated ever since. 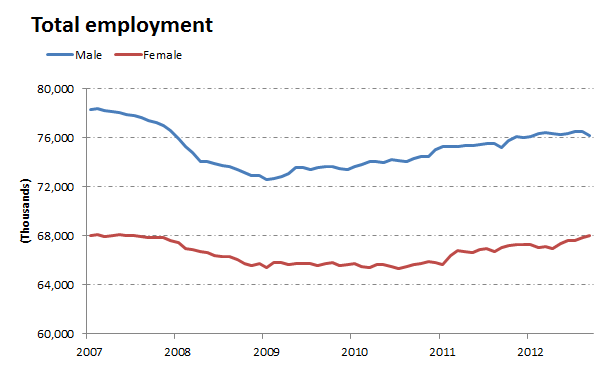 The relative drop in employment makes sense. Nearly 60% of all job losses during the recession came from the manufacturing and construction sectors -- both heavily male-dominated fields. And a lot of rise in female employment is due to social changes, as the marriage rate declines and married households take on dual-income roles.

But part of this can be explained by education. "Women were earning about 166 associates degrees and 135 bachelor's degrees for every 100 earned by men in 2007," The Wall Street Journal reported, citing data from the Department of Education. In 2011, women surpassed men in graduate degrees as well. For adults over age 25, 10.6 million women now have a master's degrees or higher, versus 10.5 million for men.

Construction employment is likely to rebound with housing. And there's talk of a new manufacturing boom. But more and more, jobs that used to be dominated by one sex are becoming less segregated. The key to getting a good job over the past several decades is technical ability and education, and that's an area women now hold an advantage in. Keep that trend up, and the age-old debate over why men earn more than women may no longer be relevant.