Bonds still yield close to nothing. Ten thousand baby boomers are retiring every day and trying to figure out how to earn an income off of their assets. Put those two together, and it's no wonder dividend stocks are (still) all the rage.

After Microsoft (NASDAQ:MSFT) boosted its dividend 22% yesterday, it will become the fourth-highest dividend payer in the S&P 500 (SNPINDEX:^GSPC), up from fifth, shelling out nearly $10 billion a year in dividend payments.

Microsoft! To me, that is remarkable. Not long ago, Microsoft was the day's innovative up-and-comer. Now it's a stalwart cash cow suitable for widows. This would have been crazy to propose a decade ago.

Dividends are sought for their stability, but there's actually a lot of dynamism in the sector.

I looked at the top dividend payers of the last year and compared it to the top payers of 2003. Those highlighted in red were top payers in 2003 but didn't make the cut last year: 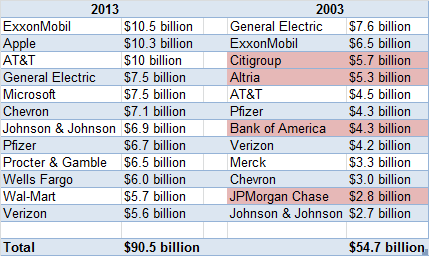 This was a spectacular decade for dividends overall -- the top 12 payers nearly doubled their total payouts. But one-third of the class of 2003 is off today's list. And two of 2003's top payers -- Citigroup (NYSE:C)and Bank of America (NYSE:BAC)-- now pay little or no dividends at all. (To be fair, Altria would be included in the top list if you include its spun-off sister company, Philip Morris International.)

The lesson here is diversification. Things change in the dividend world, and fast. If one decade ago you said Citigroup would hardly pay any dividends and Microsoft would be a leader, you'd be laughed out of the room. A similar shift will likely occur over the next decade, too.