The Federal Reserve might be the most powerful institution in the world. If you're an investor, ignore it.

The Fed announced yesterday it will continue its $85-billion-per-month bond buying program. Unexpected by nearly everyone, the Dow Jones surged to an all-time high.

As surprising as the Fed's decision was, the market's reaction was par for the course. According to the Fed's own research, effectively all of the market's gain from 1994 to 2011 came within 24 hours of Fed policy meetings: 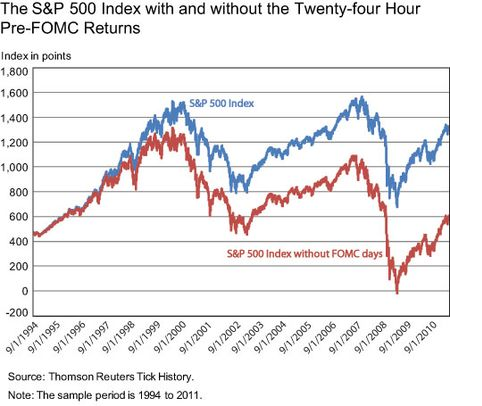 No one can argue the market's long-term gain is due to Fed action alone. Real (inflation-adjusted) earnings nearly tripled from 1994 to 2011, and U.S. economic output per person grew by more than a quarter.

But short-term traders, who dictate the direction of the market's day-to-day moves, pay more attention to Fed policy than probably any other metric. So the market's long-term gains tend to come in clustered punches around Fed meetings.

This might seem like a reason investors should pay attention to the Fed's moves, but I think it's the opposite.

Before the Fed's meeting yesterday, pundits worried about what would happen to stocks when the Fed backed away and the market went back to focusing on nothing but fundamentals.

But I ask you: When was the last time that world existed?

The Fed's ability to influence markets began long before the 2008 recession. It's been present for decades.

The Fed's job is to control inflation and support employment. It has unlimited tools to do this job and extraordinary authority to use them at will. That's been the case since it was created 100 years ago, and it will continue to be the case well into the future.

Ben Bernanke made it clear yesterday that the Fed will keep its foot on the gas until the economy gets stronger. A stronger economy might be good for stocks -- the last the time the Fed tightened monetary policy, from 2004 to 2006, stocks rose 40%. And if the economy doesn't get stronger, the Fed will keep stimulating ... which might be good for stocks.

This doesn't rule out volatility. Stocks are always volatile. But the idea that the Fed must eventually pull out, throw up its hands, let the economy crash, and walk away for good is not only unlikely, but against its legal mandate.

Now let's ask a different question: What might happen to markets if the Fed were to stop buying bonds?

This is the opposite of what should happen in theory. But it's what actually happened in reality. And reality, as they say, gets the final word.

Then there's the argument that easy Fed money is propping up stocks. This seems likely -- I'm not arguing against it -- but it's not nearly as clear as some presume.

The S&P 500 (SNPINDEX:^GSPC) is up big since the March 2009 lows, but it hasn't even kept up with inflation since 2007, before the Fed's extraordinary measures began. It seems a stretch to call something that hasn't kept up with inflation a "bubble." And that isn't just a factor of using the previous peak as a starting point. Since 1990, the index has increased an average of 6.6% per year, which is a full percentage point below its long-term trend rate. The cyclically adjusted P/E ratio is now 23 -- high by some measures, but a lower level than has been seen in 62% of months in the last 20 years.

All I'm advocating is humility. The market is full of analysts and pundits who breathlessly explain what the Fed is going to do next and how the market will react. They are nearly always wrong. Yesterday was a perfect example.

Base your investing decisions around your own goals, risk tolerance, and experience. Keep your eye on high-quality businesses, not government policy changes.