Initial jobless claims increased 5.1% to 309,000 for the week ending Sept. 14, according to a Labor Department report released today, following a week in which computer upgrades slowed processing and led to an unrevised 9.6% drop.

Today's report included revised numbers for the previous week of  294,000 initial claims, up 2,000 from the number reported last week, and still a recovery low.

However, a Labor Department spokesperson told Market News International that it will take several weeks for the two states with computer issues (now revealed to be California and Nevada) to fully process their claims backlog. This may elevate figures in coming weeks.

Still, with analyst expectations of 341,000 initial claims for the latest week, the revisions show that employment improvements were more than just a glitch. 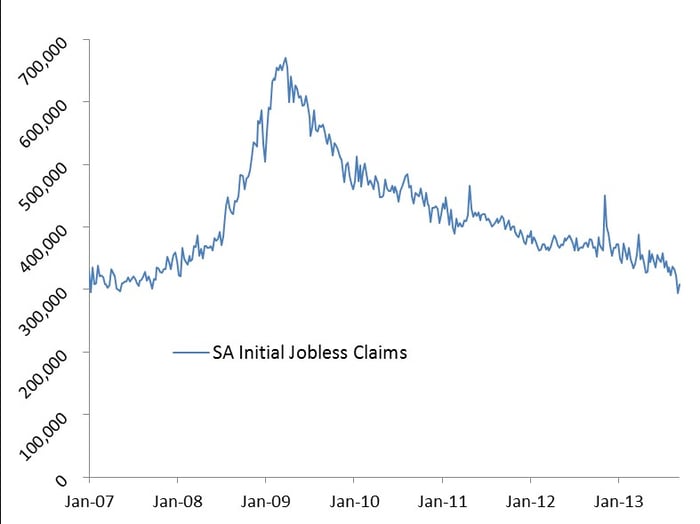 Edging away from more volatile week-to-week shifts, a 2.2% decrease in the four-week moving average to 314,750 initial claims marks the third week of a downward trend and the lowest level for that metric in nearly six years. Both the latest week's claims and the four-week average fall significantly below 400,000, a cutoff point that economists consider a sign of an improving labor market.

On a state-by-state basis, five states recorded a decrease of more than 1,000 initial claims for the week ending Sept. 7 (most recent available data). California came clean with its computer issues, recording a 25,410 drop due mostly to computer system updates. New York knocked off 2,260 from fewer layoffs in transportation, while Florida decreased by 1,810 mostly from fewer agriculture layoffs. Not a singles state registered an increase of more than 1,000 initial claims.

Fool contributor Justin Loiseau has no position in any stocks mentioned. You can follow him on Twitter @TMFJLo and on Motley Fool CAPS @TMFJLo.