If you’re looking for slow and steady stock appreciation in conjunction with generous dividend payments, then you have come to the right place.

Everyone has a vice, and smoking cigarettes is a vice for many people. Philip Morris International (PM -0.23%) capitalizes on this trend but not in the same way it has in the past. Despite holding a No. 1 or No. 2 market-share position in most of its 180 markets, Philip Morris must contend with volume declines. The question is whether or not Philip Morris is crafty enough to find ways to continue to reward investors.

A consistent trend
Philip Morris operates in several markets, which are broken down into the European Union; Eastern Europe, Middle East, and Africa (or EEMA); Asia; Latin America and Canada. Regardless of the region, the trend remains the same, which is higher pricing versus lower volume and an unfavorable product mix. The latter refers to the company's premium products not being as in high demand as its lower-priced brands, which means slimmer margins.

Another headwind is that governments continue to increase their excise taxes. However, let's focus on volume, since it's the most important factor -- it indicates whether demand is increasing or fading.

Below are total shipment volumes increases/decreases for Philip Morris brands in the first half of the year:

These numbers aren't going to ignite much investor confidence. However, that's only if you were to stop reading here.

Expectations
Philip Morris expects volumes and the company's product mix to improve in the second half. It also expects the bulk of its earnings-per-share growth to come in the second half of the year, and for the fourth quarter to be especially strong. Philip Morris expects FY 2013 diluted EPS to come in between $5.43-$5.53, an improvement over the $5.17 delivered in 2012.

While no specific reason was given for this confidence in the company's 10-Q filing, when a company with a track record like Philip Morris is confident about the future, you might want to consider being confident as well.

Future potential and peers
You might have picked up on the way Philip Morris operates. Whether it's via share buybacks, dividend payments, or price increases, Philip Morris always finds a way to improve its bottom line. Here's an example: 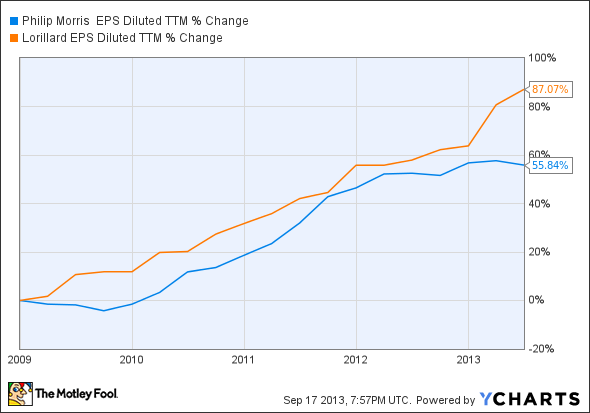 You might have noticed that Lorillard (LO.DL) is in that chart as well. Lorillard sells cigarettes and electronic cigarettes under the brands Newport, Kent, True, Maverick, Old Gold, and blu eCig. The latter gives Lorillard exposure to a growing market, which in turn gives it more top-line potential than Philip Morris at the moment. While the electronic-cigarette market is still small relative to traditional cigarettes, consider the revenue growth performances of these two companies over the past five years: 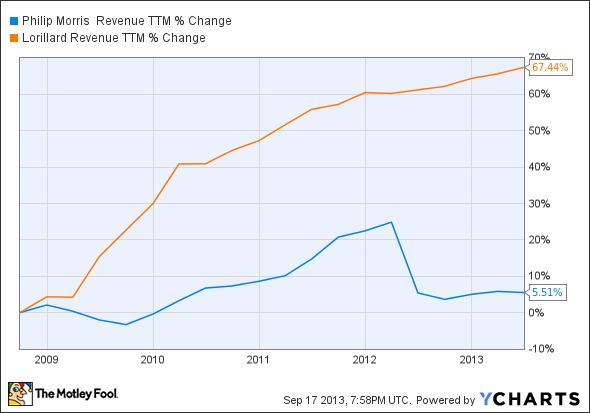 In the second quarter, Lorillard's blue eCig distribution expanded to more than 110,000 stores, and its electronic-cigarette market share expanded to 40%. With net sales of $57 million in the second quarter, this doesn't represent a large portion of Lorillard's revenue, but the potential for future growth is high considering the rising popularity of electronic cigarettes.

Philip Morris is performing well in other tobacco products (roll your own cigarettes, pipe tobacco, cigars, cigarillos). Therefore, top-line growth potential exists. It's also possible that Philip Morris will take a stab at the electronic-cigarette market. Geographic expansion can't be ruled out as a potential growth catalyst, either.

Another tobacco company is seeing similar top- and bottom-line trends to Philip Morris.

British American Tobacco (ADR) (BTI -0.03%) is known for its many popular brands, including Lucky Strike, Pall Mall, Viceroy, and Kool. Regardless of the brand names, it's seeing a similar pattern to Philip Morris. For instance, the company's 2012 revenue of $24.7 billion came in lower than its 2011 revenue of $24.0 billion.

On the other hand, like Philip Morris, British American Tobacco has found ways to please its investors. For instance, 2012 diluted EPS came in at $6.25, considerably higher than the $5.01 seen in 2011.

Also, like Philip Morris, British American Tobacco pays a dividend, currently yielding 2.6%. However, this isn't as impressive as Philip Morris at 4.3%. If valuation is running through your mind, they're both trading at 15 times forward earnings. And they're both good at turning revenue into profit, with Philip Morris and British American Tobacco sporting net margins of 27.4% and 25.7%, respectively. These two companies offer similar investment opportunities.

The Foolish bottom line
Philip Morris is likely to continue to reward shareholders. It expects volume and product mix to improve in the second half of the year, and even if that doesn't come to fruition, Philip Morris is very good at rewarding its shareholders via generous dividends and share buybacks.

In other words, Philip Morris remains a quality investment at the moment. If you would prefer to invest in a company with more top-line growth potential, consider Lorillard.

Dan Moskowitz has no position in any stocks mentioned. The Motley Fool owns shares of Philip Morris International. Try any of our Foolish newsletter services free for 30 days. We Fools may not all hold the same opinions, but we all believe that considering a diverse range of insights makes us better investors. The Motley Fool has a disclosure policy.