Bank of America has not been kind to the Dow during its short tenure, but the stock bounced back strongly in 2013. Should the Dow really have dropped this recently strong performer right now?

Bank of America (BAC -0.63%) has a short and rather sad history with the Dow Jones Industrial Average (^DJI -0.50%). The financial conglomerate joined the Dow in February 2008, only months before the market breakdown that ultimately led to B of A's ejection as of this week.

Over that brutal five-and-a-half-year period, Bank of America's shares plunged by 66%. Using the current Dow divisor, this stock removed roughly 216 points from the Dow during its tenure. From that perspective, it's easy to see why the Dow might want to sever its ties with a massive underperformer.

But the story behind Bank of America isn't entirely black and white. The stock has made a huge comeback lately and is actually up 58% over the last year. It's the Dow's second-strongest performer in that period, trailing only Boeing and its stellar 74% climb, driven by sales of the revolutionary Dreamliner. 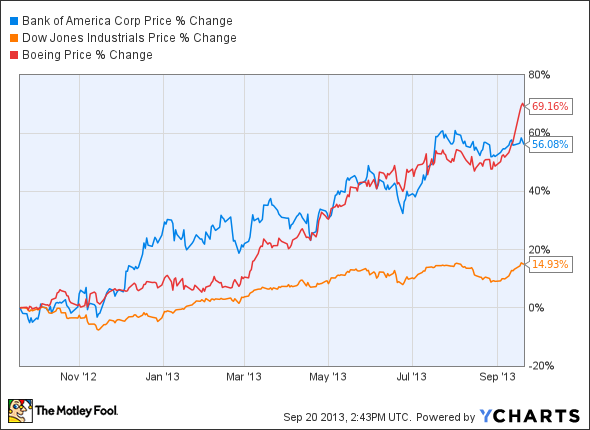 You don't change a winning team, right? And right now, Bank of America certainly looks like a short-term winner.

But the motivation for dropping B of A and two other tickers was simple and uniform: "The index changes were prompted by the low stock price of the three companies slated for removal and the Index Committee's desire to diversify the sector and industry group representation of the Index."

The departing tickers are indeed the lowest-priced members of the index. Given that the Dow is weighted by share price and not by market cap, it's hard to complain when the least impactful tickers are trimmed. If this index weighted its members by market caps instead, like the wider S&P 500 (^GSPC -0.72%), then Alcoa would still be gone and Hewlett-Packard would rank in the bottom three -- but Bank of America's $156 billion cap would have kept it perfectly safe.

There are many ways to skin a market index, but the parameters of the Dow dictate that Bank of America should be sent packing at this point. And while its one-year gains will be missed (if the skyward flight continues), the incoming tickers are no slouches: All three of the new names have gained more than 44% in 12 months.

So don't cry for the Dow. The steering committee made a choice that fits with the index's fundamental structure and brought in some equally impressive replacements for the recently highflying bank. This one will not go down in history books as an epic blunder.

Fool contributor Anders Bylund holds no position in any company mentioned. Check out Anders' bio and holdings or follow him on Twitter and Google+. Motley Fool newsletter services have recommended buying shares of Bank of America. The Motley Fool has a disclosure policy.

We Fools may not all hold the same opinions, but we all believe that considering a diverse range of insights makes us better investors. Try any of our Foolish newsletter services free for 30 days.