Here's how the incoming and outgoing Dow tickers compare in terms of dividend yields: 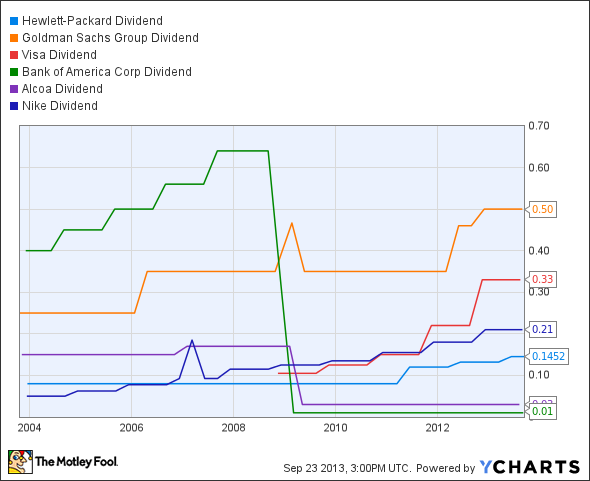 All three of the new names rank in the bottom five of the Dow's current dividend yields. Their average yield sits at 1% versus the 1.5% average of the three recent departures.

It's not a huge difference, and Hewlett-Packard is the only one of these six stocks that pays anything close to the Dow's 2.6% average. You'd be a rare income investor if you bought any of these tickers with an eye to their dividend-paying prowess above all else.

That said, the new tickers do bring a certain je ne sais quoi to the table for dividend investors. I'm talking about growing payouts.

Visa's (NYSE:V) dividend history may be short, but it's also pretty sweet. Those quarterly dividend checks have more than tripled in size since the first were sent out in 2008. These boosts largely kept pace with Visa's share prices, which also tripled over the same period. So the yield may look a bit light, but it's for all the right reasons -- shareholders rarely complain about stock prices rising too fast.

Nike (NYSE:NKE) tells a similar story. Both share prices and dividend payouts per share have just about doubled in five years, leaving little for shareholders to complain about.

The black sheep here is Goldman Sachs (NYSE:GS) in a very loose sense. The financial giant was hit as hard as anyone by the 2008 panic, but Goldman never resorted to slashing its payouts. Sure, the 33% boost to the first dividend of 2009 turned out to be a stretch and had to be dialed back right away, but Goldman has been paying record-level dividends since the end of 2012.

Ejected tickers Alcoa and Bank of America can't match those claims. Both stocks pay out a fraction of their pre-panic dividends and seem unlikely to return to full income-generating health anytime soon.

So the Dow just lowered its immediate dividend payouts a little bit, but the new names look far more likely to reward patient investors than the old tickers do. All things considered, that's not a bad trade at all.