There's great news for GM investors. Here are the details.

It's been a strong year for America's two largest automakers, General Motors (GM 2.65%) and Ford (F 2.21%). In August, the seasonally adjusted annual rate, or SAAR, of vehicle sales, topped 16 million for the first time since November 2007. 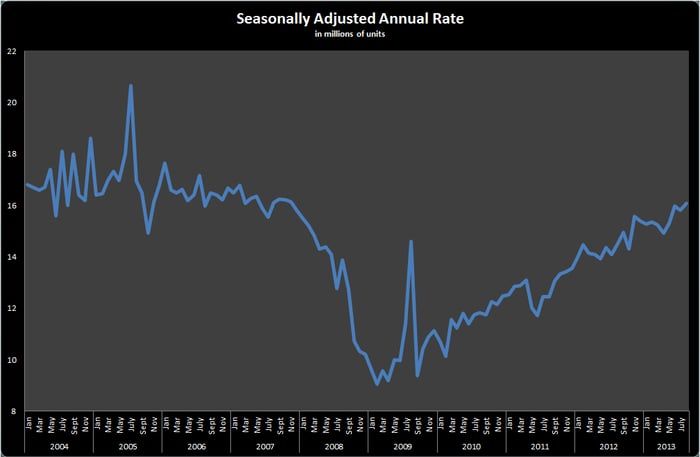 Both automakers' stock prices are flirting with 52-week highs, and the good news keeps on rolling in. Today was especially sweet for General Motors. Here's why.

Major upgrade
Today, Moody's announced that it upgraded General Motors' debt to "investment grade," the first of the four major credit rating agencies to do so. It was the first time in eight years that GM's debt wasn't considered junk-bond status, according to CNNMoney.

This is an important upgrade for GM for a couple of reasons. First, the company can now borrow at lower costs with its upgraded debt rating. That means it could borrow money, while interest rates are low, to help cover its massively underfunded pension plan. Second, it means institutional investors will start taking a closer look at the company for mutual funds as it continues to complete its turnaround from its 2009 bankruptcy.

GM remains years behind Ford in its restructuring, and the latter has already earned "investment grade" status from all four major credit agencies. But how have America's largest automakers managed such a turnaround?

"The North American performance has been much better than we would have anticipated," said Dan Picciotto, S&P's primary credit analyst on GM and Ford, according to Bloomberg. "It's hard to understate how much cost has been taken out of the North American operations before, during, and after 2008 and 2009. They're certainly in a much better cost position."

To put that "much better cost position" into perspective, let's dig a little deeper. Consider that a mere six years ago, Ford, General Motors, and Chrysler weren't profitable while SAAR rates topped 17 million vehicles. Today, after Detroit's Big Three have closed plants and improved operations, they can maintain profitability at SAAR levels between 10.5 million and 11 million units per year, according to Morningstar -- a ridiculously huge improvement. Even during the worst points of the Great Recession, SAAR levels rarely dipped that low. Also consider that GM's U.S. hourly labor cost was roughly $16 billion in 2005 but has been trimmed back to $5 billion today, according to Morningstar.

On the other side of the equation, Ford and GM are consistently improving their vehicle quality to compete in segments they were once left for dead in. Consider that Ford's Fusion has drastically closed the gap on Toyota's Camry, the best-selling car for 11 consecutive years. 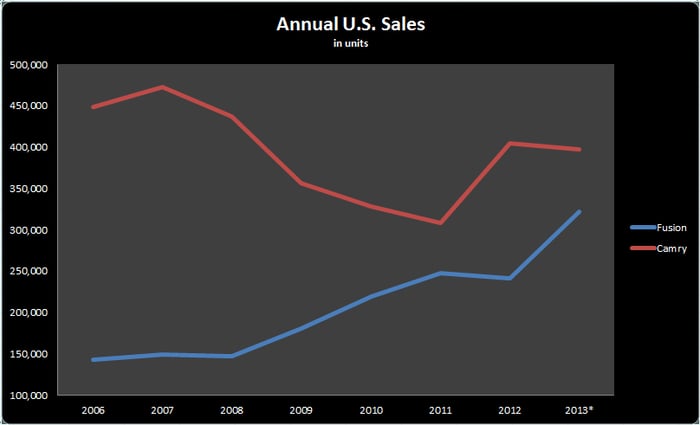 Graph by author. Information from Automotive News DataCenter. 2013 projected from sales through August.

GM has had its own success story recently, with Consumer Reports calling the Chevy Impala the top-ranking sedan. It's the first time an American vehicle has held that spot in two decades. "The Impala's performance is one more indicator of an emerging domestic renaissance," Jake Fisher, director of Consumer Reports automotive testing, said, according to the Detroit News.

You heard him right: It's a Detroit renaissance. GM's debt upgrade today is just one more reason for investors to buy into Ford and GM's comeback. The road ahead appears to offer a smooth ride as vehicle sales continue to bounce back and profitability improves.