Please ensure Javascript is enabled for purposes of website accessibility
Log In Help Join The Motley Fool
Free Article Join Over 1 Million Premium Members And Get More In-Depth Stock Guidance and Research
By Adrian Campos - Sep 24, 2013 at 10:52AM

What is causing the return of newspaper stocks?

What do newspaper companies like The Washington Post Company (GHC 2.02%), New York Times (NYT 0.52%) and Gannett (GCI) have in common? Although they are said to be in a dying industry, so far this year all of them have beaten the Standard & Poor's 500 index performance by a wide margin. What is behind the return of newspaper stocks? 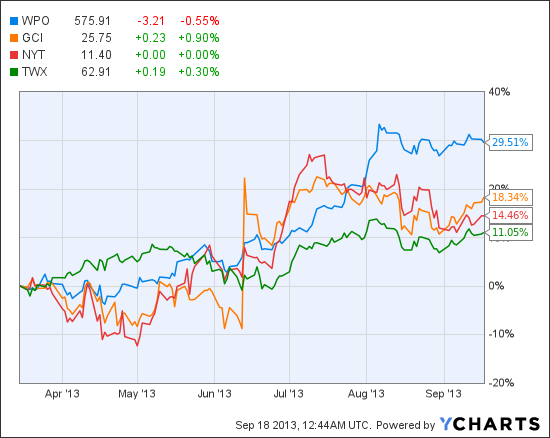 Is the newspaper industry really dying?
Investors and analysts have long believed that the newspaper industry will go the way of the dinosaur. Such beliefs are not unfounded--practically every newspaper has struggled with poor sales and decreasing circulation volumes in the past 10 years. Just to give a few examples, between 2003 and 2012, The New York Times saw its revenue decrease almost 40%. The Washington Post's newspaper business didn't do any better; its revenue base decreased so much that by the time Amazon's CEO Jeff Bezos became its owner, the legendary newspaper was valued at $250 million, $65 million less than the promising website The Huffington Post, sold early in 2011.

Most newspapers simply failed to capitalize on one of the most important technological innovations in history, the Internet. However, it's not too late for a change. At least, that's the opinion of investors like Bezos and Warren Buffet, who bought 63 daily and weekly newspapers owned by Media General for $142 million last year.

Ironically, savvy investors like Bezos actually think that printed newspapers won't exist in 20 years. The truth is that the newspaper industry is in the middle of a massive transformation, full of opportunities and threats. Some newspapers will disappear. On the other hand, newspapers that take advantage of the Internet to increase their digital media products and coverage, reduce the distance between their readers and their editorial staff, and attract new readers globally, are set to successfully accomplish the transition from print to digital. Which newspapers share such features?

The Washington Post Company: More than newspapers
The Post is probably the best example of a newspaper company that went beyond print. After a massive reengineering of its business, it started generating the majority of its operating profit from its television broadcasting and Kaplan education divisions. Therefore, selling the majority of its newspaper publishing assets to Bezos last month was a strategic move aimed at increasing overall profitability. The newspaper division frequently reported operating losses.

The new Post certainly looks more attractive. Without its legacy business, the company now has the cash and focus needed to both expand its Kaplan division globally and strengthen its broadcasting business. Kaplan, which has become a symbol of top-quality for-profit educative material, generated as much as $2.2 billion in revenue last year, but management has higher aspirations. Under the promising Kaplan Commitment campaign, it started offering students a three-week trial period with no tuition obligation.

New York Times: Even better times await
Although its future may not look as promising as The Post's, New York Times is also trying to get out of the printed newspaper business, which generates three quarters  of the company's total sales.

As a matter of fact, New York Times' digital efforts are already paying off. In the latest quarter, paid digital subscriptions saw a 40% year-over-year increase, which caused total circulation revenue to rise 5%. By offering its customers the option of enjoying the digital subscription for free if they sign up for a print subscription, the company has managed to keep circulation volumes high so far.

Finally, a significant proportion of New York Times' market capitalization is backed up by a safe, tangible asset: its real estate. The company owns 58% of the New York Times Building, located in the heart of the most expensive city in the U.S.

Gannett: Belo acquisition will bring value
The owner of USA Today is also well aware of the benefits of business diversification. In 2003, the company purchased one third of CareerBuilder.com, which has become one of the most visited job search websites in the U.S.

More recently, the company announced this June the acquisition of Dallas-based media company Belo Corporation, which owns 20 commercial broadcasting TV stations and two regional cable channels. This move will accelerate Gannett's diversification process, and is expected to bring $175 million in annual synergies within three years. By adding exposure to the high-margin media business, Gannett is securing its place in the new digital newspaper industry.

Final foolish thoughts
Printed newspapers will probably disappear in the next decade. However, this is not the end of the newspaper industry. Some companies have made steady progress in diversifying their businesses away from the troubled print publishing segment, and are taking advantage of their strong branding and reputations to increase digital subscriptions and conquer new media channels. These companies will survive the death of print newspapers.

Adrian Campos has no position in any stocks mentioned. The Motley Fool has no position in any of the stocks mentioned. Try any of our Foolish newsletter services free for 30 days. We Fools may not all hold the same opinions, but we all believe that considering a diverse range of insights makes us better investors. The Motley Fool has a disclosure policy.