Please ensure Javascript is enabled for purposes of website accessibility
Log In Help Join The Motley Fool
Free Article Join Over 1 Million Premium Members And Get More In-Depth Stock Guidance and Research
By Leo Sun – Sep 25, 2013 at 11:15AM

Will Microsoft have better luck this time around with its two new Surface tablets?

Microsoft (MSFT -1.94%) introduced two new Surface tablets this week with the aim of breaking into the tablet market dominated by Apple's (AAPL -3.00%) iPad and Google's (GOOGL -1.82%)Nexus. It was a risky and bold move, considering the prior lackluster sales of the Surface, which only generated $853 million in revenue last year and accounted for 1% of Microsoft's top line.

The original Windows 8 Surface is still hanging in there, but sales of the cheaper Surface RT failed miserably. The Surface RT caused the company to take a $900 million writedown last quarter due to unsold units. Whereas the Windows 8 Surface was backwards compatible with other Windows software, the Surface RT, powered by an ARM processor, could only run the limited selection of programs from the Windows Store.

Will the Surface shatter?
According to research firm IDC, Windows tablets accounted for 4.5% of all tablets shipped in the second quarter of 2013 -- a big jump from 1% in the prior year quarter. Yet of those Windows tablets, only 15% were Surface tablets. Overall, Apple's iPad still controls 32.5%, while tablets running Android dominate 62.5% of the market.

To overcome those odds, Microsoft needs to make a serious impression on consumers if it has any hope for the new Surface tablets. Let's discuss three major problems Microsoft has to address for the Surface to survive.

Problem #1: The Price
The first thing Microsoft should address is the price.

Let's compare the new models of the Surface to the competition. Keep in mind that these prices do not include the keyboard cover, which costs an additional $50 to $120.

The prices of the two new Surface tablets are simply not low enough to compete against the iPad or Samsung's Galaxy Tab. Only the Surface 2 RT can be considered an actual competitor to either device, as the Surface Pro 2's prices are closer to high-end Ultrabooks than tablets.

Although both new Surface units boast higher technical specifications than the iPad or the Galaxy Tab, many consumers aren't going to dig that deep. They'll simply notice that for the same price, they can have either an iPad or a Surface -- a choice that heavily favors the former. For an even cheaper price, around $200, customers can buy a full-featured Google Chromebook instead.

Microsoft needs to rethink its pricing strategy and possibly revisit its original Xbox strategy -- sacrificing margins to gain market share as quickly as possible. Although this may hurt margins in the short term, it may be the only way to steal share away from Apple and Google.

Problem #2: Form Factor
The second major problem with the Surface is the form factor. Although the two new tablets are thinner and lighter than their predecessors, their overall design is the same -- a tablet with a kickstand paired with an optional keyboard cover.

Although the Surface is a beautifully designed device that stands out in a crowd, the product is designed with the notion that modern customers dislike the design of traditional notebook computers.

That is hardly the case, as seen with the rising sales of Google, Samsung, and Acer Chromebooks, which are currently the fastest-growing group of sub-$300 computers. Chromebooks are lightweight, cloud-based, and conveniently tied into the Google ecosystem of apps and services, making them an ideal second computer for students and young professionals.

The old notebook computer form factor is still more useful than the Surface for a simple reason -- it can be easily placed in a user's lap and used. Since it depends on its kickstand and a soft keyboard, the Surface can be awkward to use when positioned on the lap, and is best used on a table. In addition, the Surface's keyboard is a thin one that can be more difficult to use than traditional ones.

A solution would be to take a hint from Hewlett-Packard and Asus, and make the Surface more of a "Transformer/Eee Pad" device, which can be removed from a full-featured keyboard dock instead.

Problem #3: The Ecosystem
The third and largest problem Microsoft has to address is its ecosystem. Whereas Google's cloud-based ecosystem can be accessed across multiple platforms, and iPhone users can install the same apps on their iPads, Microsoft's ecosystem is still very fragmented. Windows Phone 8, Windows 8.1, and Windows 8.1 RT are still stuck in their own universes, which only sometimes overlap.

Microsoft attempted to address this problem with a massive reorganization of the company's businesses, which combined the Windows 8, RT, and Windows Phone groups under a single division, the operating systems group. While that was a step in the right direction, it didn't address the fact that the apps available to Windows Phone and Surface RT users are significantly limited compared to the backwards compatible selection available to Windows 8 users. 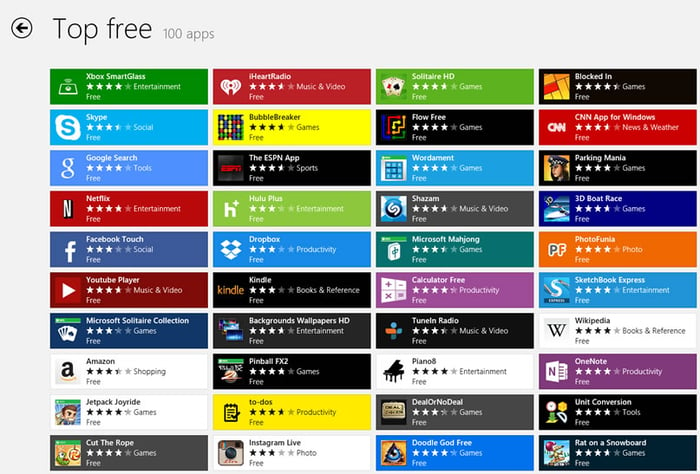 That leads into the main problem with Windows' ecosystem -- its lack of apps. When it comes down to a decision to choose between an Apple, Android, or Surface tablet, the final choice will be heavily influenced by which apps are available.

Mobile apps are usually released for iOS first, since a unified hardware and software configuration is easier to develop and test apps on. If the app is popular, an Android version usually follows. That puts Microsoft in dead last to receive popular versions of new software. For example, Windows Phone users are still waiting for an official Instagram app -- an app that was originally released for iOS in 2011 and for Android in 2012.

With only 100,000 apps in the Windows Store compared to Apple's 950,000, the Surface is at a huge disadvantage when it comes to software.

A final thought
Microsoft knows it faces a tough battle with the Surface. The company recently offered $200 rebates for customers who traded in an iPad for a Surface. Between March and June, Microsoft even offered developers $100 per published app (with a limit of 20 apps) in a desperate bid to increase the size of its Windows Store.

However, unless Microsoft addresses the three main problems that I mentioned, these two new Surface tablets could be doomed to fail.

Leo Sun has no position in any stocks mentioned. The Motley Fool recommends Apple and Google. The Motley Fool owns shares of Apple, Google, and Microsoft. Try any of our Foolish newsletter services free for 30 days. We Fools may not all hold the same opinions, but we all believe that considering a diverse range of insights makes us better investors. The Motley Fool has a disclosure policy.