Medical equipment maker Stryker (SYK 0.97%) shook up the industry on September 25th by announcing a definitive agreement to acquire MAKO Surgical (MAKO.DL), best known for its RIO Robotic Arm Interactive Orthopedic System, for $1.65 billion. The deal, which values MAKO at $30 per share, represents a whopping acquisition premium of 87.5% over the previous day's closing price.

Is MAKO worth that lofty price? Let's take a look at what this deal means for Stryker and its industry rivals.

Stryker's strength hasn't gone unnoticed -- it has outperformed Zimmer Holdings, Smith & Nephew, and the S&P 500 over the past 12 months. 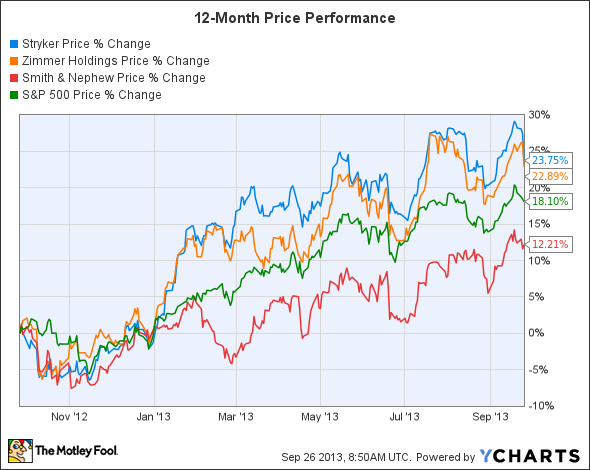 Stryker is capitalizing on its stronger market position by acquiring MAKO while its rivals are lagging. Stryker's last big purchase was that of Chinese medical equipment maker Trauson Holdings earlier this year for $764 million in cash. Prior to that, it purchased Israeli medical equipment company Surpass Medical for $135 million.

Although MAKO is a large acquisition, Stryker has the cash to support it. The company finished last quarter with $4.7 billion in cash and equivalents and $2.8 billion in debt.

Breaking down Stryker's core businesses to find opportunities
To understand why Stryker purchased MAKO, we should take a look at the growth and weight of Stryker's three business segments.

Stryker's previous acquisition of Surpass Medical added a flow diversion stent to treat brain aneurysms to its MedSurg segment, and its purchase of Trauson boosted revenue growth at its Neurotechnology and Spine business.

The appeal of robotic surgery
Over the past several years, robot-guided surgical procedures have gained mainstream acceptance thanks to Intuitive Surgical's (ISRG -0.82%) da Vinci surgical system. The da Vinci was used for nearly 400,000 minimally invasive surgeries in the United States last year, and costs $1.45 million per unit and over $100,000 more in annual service costs. MAKO's RIO Robotic Arm, by comparison, costs nearly $1 million.

Stryker could send the sharks to China
China's state-owned hospitals have a strong interest in robotic surgery, opening the doors to companies like Intuitive Surgical, which started selling the da Vinci to Chinese hospitals in 2007.

By acquiring Trauson, Stryker already has one foot in the door. Stryker's sells its cheaper Trauson orthopedic implants in less affluent parts of the country while selling its more expensive namesake implants in richer urban areas.

Therefore, Stryker's presence in China could provide the framework to launch MAKO's RIO system into the country, which has one of the world's fastest growing elderly populations. There are currently 194 million people over the age of 60 in China -- a figure that is expected to more than double by 2050.

That's a lot of knees, hips, and spines that will need surgery and implants, which could boost Stryker's top-line growth for decades to come.

A Foolish final thought
Stryker clearly has ambitious plans for the future. With the acquisition of MAKO, Stryker gains a line of premium surgical products that complement its core business of implants and surgical equipment worldwide.

With Trauson and MAKO now under its umbrella, Stryker is well positioned to profit from an aging global population and rising demand for less-invasive procedures. These positive catalysts could help it outgrow rivals like Zimmer Holdings and Smith & Nephew in the long run.

Why Do You Still Own MAKO Surgical?

What Medtronic Needs to Beat the Stryker-MAKO Merger

Does the Robotic Surgery Industry Need Obamacare to Succeed?