One of the best-performing Chinese IT stocks so far this year is E-Commerce China Dangdang (DANG), better known as Dangdang, up an amazing 90% since last September. Just like Amazon (AMZN -1.24%) in its early days, Dangdang was conceived as an online bookstore. However, the company now offers cosmetics, home appliances, and apparel, among other products. Despite increasing competition from Amazon.cn, Alibaba's Taobao, and online discount retailer Vipshop (VIPS 1.32%), Dangdang keeps expanding its revenue. What competitive advantages protect Dangdang from fierce competition? 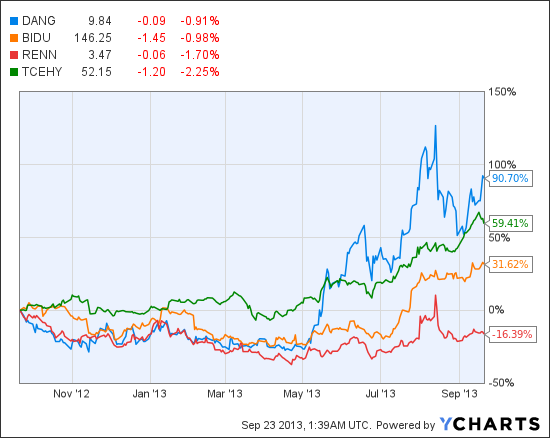 The biggest bookstore in China
Compared with Alibaba's T-mall, Dangdang is quite small. According to iResearch, in the first quarter of 2013, Dangdang had only a 2.6% share of the online consumer shopping market. Although this number is above Amazon China's share by 0.7 percentage points, it represents a small proportion of T-mall's huge share. 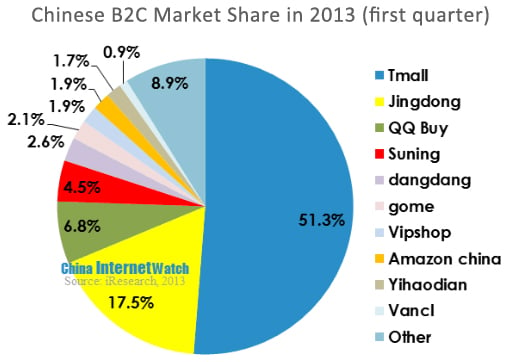 Despite its small market share, Dangdang has become the largest bookstore in terms of selection and revenue. As of June, the company offered more than 900,000 books. Consequently, most Chinese would visit Dangdang (rather than Taobao) if they want to find and buy a book.

Strong brand
In 15 years, the company has been able to build a strong reputation for quality service, fast delivery, and wide selection of books. It has one of the lowest complaint rates among the top 10 B2C Chinese websites. Its 6.73% rate is well below Taobao (17.31%), which faced the most product quality customer complaints in the first quarter of 2013.

The next challenge for Dangdang is to capitalize on its strong brand to successfully go beyond books. The company already has more than 900,000 stock-keeping units of general merchandise, and, like Taobao, a platform for third-party merchants. Moreover, it took on Amazon by releasing its own e-book platform on 2011, where you can download some digital books for as little as 2.99 RMB (U.S. $0.50). To further strengthen its brand, the company is investing heavily in TV advertising, in an effort to promote its new apparel and fashion business. Its investments in mobile technology are already paying off. During the second quarter of 2013, mobile traffic accounted for almost 40% of overall traffic. These are the right steps to keep a company competitive.

The war for the Chinese online retail space
Dangdang's competitive advantages have allowed the company to grow its revenue by seven times between 2008 and 2012. Still, this growth rate has not been enough to reach profitability. That being said, at the current pace, it won't be long before we see Dangdang breaking even. The latest earnings call came in with a 22% increase in revenue. Net losses came in at $10.46 million, representing only 5% of total revenues.

Weak profitability was probably caused by fierce competition and price wars, which according to Dangdang's CEO, are set to destroy most e-commerce competitors and cause an industry reshuffle.

Even the world's largest online retailer, Amazon, is vulnerable to such conditions. Holding less than a 1% share of China's e-commerce market, the company needs to redesign its marketing strategy in the second-largest world economy, where online shopping volume is set to double by 2015.In order to take market share away from well-established competitors like Dangdang and Taobao, Amazon will have to use more aggressive marketing campaigns. For example, by increasing its discount on Kindle devices, it could put more Kindles in the hands of Chinese consumers, and secure a strong position in the emerging Chinese e-book market.

Companies can also choose to develop a unique business model in order to survive. Vipshop is one of the largest flash-sale e-commerce websites in China, with more than 3.5 million active customers and double-digit revenue growth expected ahead. Unlike Dangdang, which is still struggling to break even, Vipshop is very profitable, despite its focus on leftover products. Its gross profit figure increased by almost 180% in the latest quarter, to $82.6 million, suggesting strong competitive advantages. First, due to the nature of its business model, the company holds no inventory. It targets the fast-growing Chinese middle class. And considering it already offers more than 6,000 brands, Vipshop's current scale of operations is large enough to generate bargaining power against merchandisers.

Final foolish thoughts
The war for the Chinese online retail space has just started. Even Amazon China is struggling to capture market share. Only companies with strong competitive advantages and branding, like Dangdang and Vipshop, are set to survive.