Despite Teva’s poor performance in the stock market, it still has several strong points that could pull the company back up.

Teva Pharmaceutical Industries (TEVA 1.08%) hasn't done well in the stock market as its recent quarterly earnings reports didn't impress investors. Looking forward, is Teva worth owning? What are the good and the bad of Teva? Let's start with the company's second-quarter earnings report.

Second-quarter reports
Teva's earnings report for the second quarter came out on Aug. 1. The company's revenues remained nearly unchanged year-over-year; its operating profit was a $586 million loss, which was mostly due to a $930 pantoprazole patent litigation provision and a $485 million provision related to its modafinil antitrust litigation. After controlling for these provisions, the company's operating profitability reached 19.3%, which isn't far off its profitability in the second quarter of 2012 -- back then it was 20%. This means that the company kept its revenues and profitability nearly flat during the quarter.

In order to get a better understanding of Teva's operations, let's divide the analysis between the generic segment and specialty segment.

Teva's most important drug is copaxone, an MS treatment. Sales of the drug rose by 9% to reach $1.1 billion during the quarter. This represents nearly 20% of the company's revenues. Moreover, this drug has the highest gross profitability for Teva at nearly 89%. Alas, the main problem the company has been facing is the expiration of copaxone's patent, which is scheduled for May 2014 -- unless the recent U.S. courts ruling will change. This is among the reasons for the lack of growth in the company's stock and valuation.

The situation, however, might not be as dire for Teva as people may think: Teva is developing a copaxone treatment that will change from daily injections to a three-times-a-week oral treatment. Currently, the treatment is in phase 3 trials. Once this drug is approved, it may pull back up the company's stock price and keep Teva's high profit margin from copaxone. 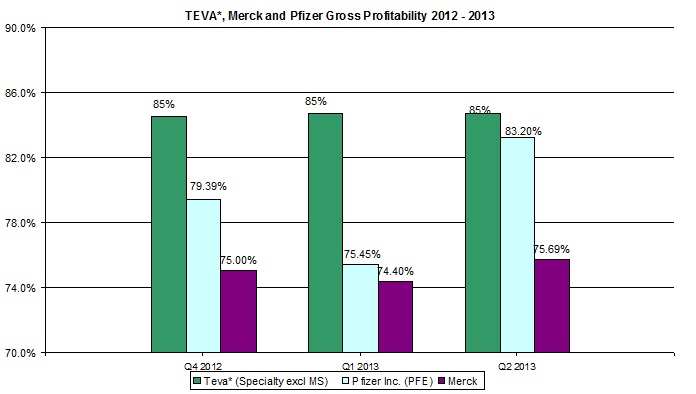 Generic medicines sales are declining
Teva's generic business isn't doing well as sales dropped by nearly 7.8% in the second quarter of 2013 compared to 2012. The generic segment accounts for 49% of the company's revenues.

Let's turn to see other factors that could impede the company's future progress. 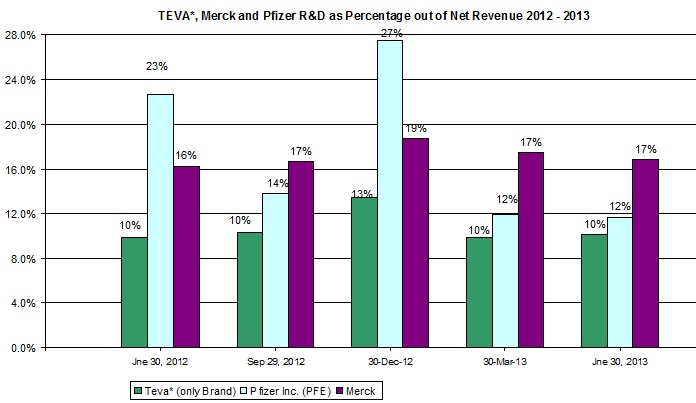 Pfizer's R&D as a percentage of revenues reached 12% in the second quarter of 2013; Merck's ratio is the highest of these three companies at 17%. If Teva continues to allocate smaller portions of its revenues toward R&D, the company's potential growth in the future might slow down.

One advantage Teva has over other companies is its tax breaks.

Tax benefits
One of Teva's silver linings was its high tax breaks in Israel: In 2012, the company paid as low as 0.3% of its earnings to the Israeli tax authorities. Moreover, between 2006 and 2011, the company's total tax breaks in Israel reached $3.5 billion. According to Teva's earnings reports , the company expects to have a tax benefit of 5.5% in 2013 compared to a 7.5% tax benefit in 2012. In comparison, Merck expects its tax rate to range between 21% and 23% in 2013. Pfizer's tax rate was around 21% in 2012. Teva's tax breaks allow it to keep most of its earnings and allocate them to its investors through dividends.

The bottom line
Teva's revenues are likely to remain flat in the near future: The ongoing drop in generic sales due to strong competition and next year's patent expiration for copaxone are likely to hang over many investors who hold Teva's stock. But the company has several strong points including the development of its new MS treatment, its low tax rate, high profitability, and stable R&D expenditure. These factors, especially the new MS treatment, could eventually pull back up the company's stock as the year progresses.