Visa (NYSE:V) is a very old business but a rather fresh-faced stock. The credit card veteran entered the stock market in 2008, so it will be decades before you can declare Visa an official dividend aristocrat. But the company started sending out quarterly checks right away, like a college student building a credit history by opening a few credit cards. It's a start, but are Visa's dividends destined for greatness?

Income investors see red flags right away. Visa just joined the Dow Jones Industrial Average (DJINDICES:^DJI) but its 0.7% dividend yield is the lowest percentage offered among all 30 member stocks. And the weak yield stands out even outside the elite club of Dow stocks: Visa's payout is among the 30 least generous yields among the 419 S&P 500 stocks that offer dividends at all.

But don't give up on Visa's dividends quite yet. The company may have started slow, but its dividend increases are actually among the Dow's best.

Here's how the top three five-year dividend increases on the Dow stack up, including one very familiar name: 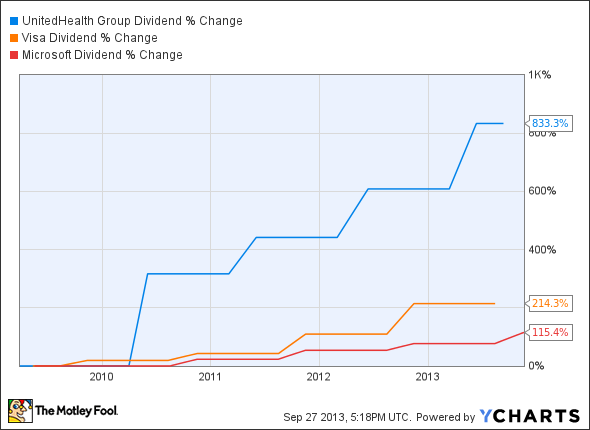 That's right, Visa's dividend growth is almost second to none. The one stock that has managed to outpace Visa in this five-year race is UnitedHealth (NYSE:UNH), and that's only because the health insurance specialist recently abandoned its token dividend policy for a more substantial payout.

UnitedHealth and Visa have another thing in common, namely their massive headroom for continued dividend growth. Visa funnels just 15% of its net income into dividend checks right now and UnitedHealth stands at 17%. Both are among the four lowest payout ratios on the Dow. By contrast, Microsoft pushed a 34% dividend payout ratio that ranks in the middle of the Dow pack. Sure, Microsoft still has some room to boost its payouts but not nearly as much as its faster-growing peers.

All things considered, Visa's current yield is extremely flimsy but it's balanced out by solid potential for long-term payout growth. Locking in Visa's current share prices could become a serious effective yield down the road if its payouts continue to triple every five years. That's a mouth-watering prospect for income investors with long-term leanings.