It's almost impossible for financiers to have a competitive advantage. The truth is, borrowing low and lending high is an extraordinarily commoditized business since borrowers just want the lowest possible rates, all else equal.

I think there's a case to be made that one company breaks from the mold. Main Street Capital (NYSE:MAIN) has a huge cost advantage over its peers that pays off in more ways than one.

The low-cost advantage
Main Street Capital is a business development company that invests in smaller, middle-market companies. It primarily focuses on the lower middle market -- companies that post earnings before interest, taxes, depreciation, and amortization (EBITDA) of $3-$15 million per year.

By the very nature of the business, companies that make smaller loans have to be more efficient. Underwriting costs do not scale with the size of an investment. That is to say, there are fixed costs that you incur whether you're loaning out $10 million at a time or $100 million at a time. It doesn't cost 10 times more to make a loan that's 10 times larger.

So, for a company like Main Street Capital, costs are everything. And over the past few years, it has done an excellent job of holding down its operational expenses.

The company makes this point very clear in its presentations to shareholders. Here's a chart of Main Street Capital's total costs as a percentage of assets compared to other BDCs: 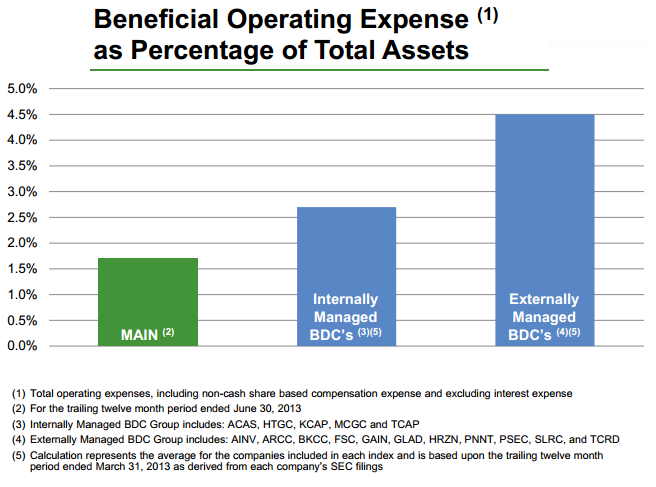 It's important to reflect on this chart because corporate presentations are often created to make the presenting company look much better than it is. But in this case, the chart is 100% truthful as it includes all real operating costs including stock compensation (which companies all too often ignore), as well as metrics from much larger competitors, which have a substantial scale advantage over this tiny middle-market financier.

Most middle-market BDCs charge fees based on a 2-and-20 schedule, taking 2% of assets under management plus 20% of all returns. Main Street Capital doesn't do that. Rather, it simply pays employees a salary, with some added stock-based compensation based on performance. The structure allows it to have some of the lowest operating costs in the business, and pass on more of its earnings to shareholders.

Why I'm bullish on Main Street's future
To be fair, Main Street Capital does have a relative scale disadvantage to its peers. For example, Ares Capital Corporation (NASDAQ:ARCC), the largest BDC on the public markets, is so big and well known that it has managed to raise capital going out as far as 30 years. Likewise, larger rival Prospect Capital (NASDAQ:PSEC) is known to push its weight around to structure its own collateralized loan obligations and earn extra underwriting fees that smaller BDCs cannot negotiate.

But these are not inherent advantages -- those are just advantages that come along with being really, really big. Once a BDC crosses $2 billion or so in market cap, it tends to enjoy preferential treatment from investors and its customers.

There isn't anything that's really holding Main Street Capital back from growing into a size where it could have the advantages of scale. Its shares trade above book value and it has consistently raised more and more money with new stock issuance. At this point, it's just a waiting game.