Please ensure Javascript is enabled for purposes of website accessibility
Log In Help Join The Motley Fool
Free Article Join Over 1 Million Premium Members And Get More In-Depth Stock Guidance and Research
By Alex Dumortier, CFA - Sep 27, 2013 at 10:15AM

With just two trading days left before the deadline for the U.S. to pass a continuing resolution that will keep the government running, it's understandable if investors are a little apprehensive this morning (in fact, they don't look nearly apprehensive enough, if you ask me). U.S. stocks opened lower this morning, with the S&P 500 (^GSPC -0.23%) and the narrower, price-weighted Dow Jones Industrial Average (^DJI 0.07%) down 0.61% and 0.66%, respectively, at 10:10 a.m. EDT.

BlackBerry (BB 2.37%) reported a loss of nearly $1 billion today for the quarter ended Aug. 31. The mobile-device maker had already given investors the heads-up regarding this horrendous result a week ago. The $965 million loss included a $934 million writedown on inventory of its new Z10 phone, which is doing whatever the opposite of "flying off the shelves" is (the latter being an iPhone trick). However, even excluding the writedown and restructuring costs, BlackBerry still managed to lose a quarter of a billion dollars. The company still has $2.3 billion in net cash on its balance sheet, but the rate at which it is burning through the stuff will quickly undermine its flexibility.

Right now, there is one principal factor driving BlackBerry shares: the odds that a consortium led by Canadian insurer Fairfax Financial will buy the company out at the proposed price of $9 per share. The current stock price, which has drifted down to around $8 over the past days, indicates that investors have little confidence the deal will be consummated on those terms: 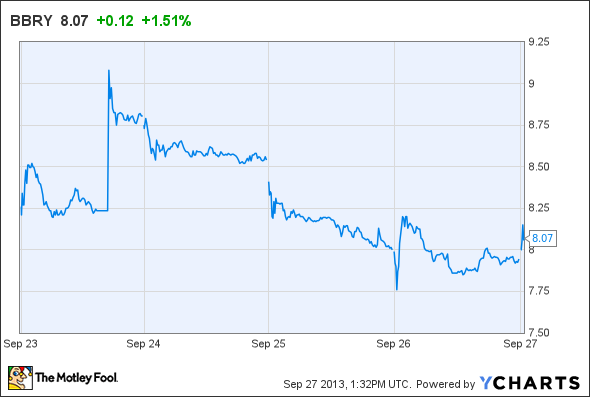 Despite Fairfax's reputation as a savvy investor, I think that skepticism is well deserved:

Meanwhile, BlackBerry's troubles and its decision to pull out of the consumer market are having a real impact on the relationships it has with its partners, with wireless operator T-Mobile USA already announcing it will no longer stock its devices in its stores. Meanwhile, Jabil Circuit (JBL -0.85%), one of BlackBerry's main contract manufacturers, said it is examining how to wind down their relationship, which represents 12% of its revenue.

The bottom line for investors: I don't think BlackBerry qualifies as either a deep value or an attractive merger bet. Don't nibble at this bruised and rapidly spoiling fruit.

Fool contributor Alex Dumortier, CFA has no position in any stocks mentioned; you can follow him on Twitter @longrunreturns. The Motley Fool has no position in any of the stocks mentioned. Try any of our Foolish newsletter services free for 30 days. We Fools may not all hold the same opinions, but we all believe that considering a diverse range of insights makes us better investors. The Motley Fool has a disclosure policy.