Investors love stocks that consistently beat the Street without getting ahead of their fundamentals and risking a meltdown. The best stocks offer sustainable market-beating gains, with robust and improving financial metrics that support strong price growth. Does Kroger (NYSE:KR) fit the bill? Let's take a look at what its recent results tell us about its potential for future gains.

What we're looking for
The graphs you're about to see tell Kroger's story, and we'll be grading the quality of that story in several ways:

What the numbers tell you
Now, let's take a look at Kroger's key statistics: 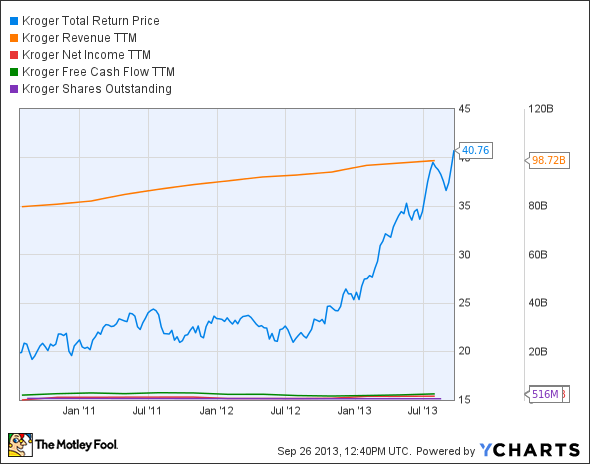 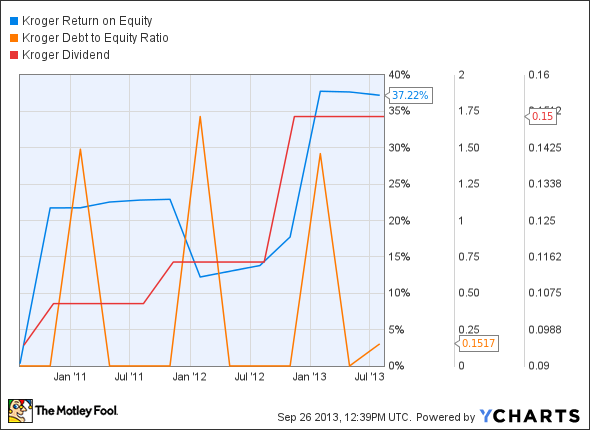 How we got here and where we're going
Kroger's results come in at wildly divergent levels, as the company's net income was so close to zero at the start of our tracking period that its rise was bound to produce massive percentage growth. But the company's net margins remain in that narrow band (currently between 1% and 2%) that typify grocery chains, so its actual progress is more a return to normal than an unexpected surge. Six out of nine passing grades is nothing to scoff at, though, especially when we can see the possibility for a perfect score in the future. It will only take a slight acceleration in revenue, a modest debt repayment, and sustainable profitability to earn that perfect score. Can Kroger manage it? Let's dig a little deeper to see how likely that may be.

Fool contributor Anup Singh notes that Kroger has Kroger's expanded large-format footprint appears to have helped same-store sales surge 4% during the most recent quarter. Kroger has also started withdrawing its double-coupon policy, which will be replaced with regular low prices and weekly offers. Kroger's customized discounts, offered through its customer loyalty program, have combined with growing demand for organic and natural food to entice more health- and budget-conscious customers to its stores. The company is poised for greater long-term benefits in this segment as an alternative to the notoriously costly "Whole Paycheck," as the global organic-food market is expected to grow at an annualized rate of roughly 13% to reach $105 billion by 2015.

Kroger has also been expanding into the South-East and Mid-Atlantic U.S. markets to strengthen its position in the fresh-food segment. The company's recent acquisition of Harris Teeter (NYSE: HTSI) for $2.4 billion will add some 212 stores across eight states, primarily in this new geographical market. The deal is expected to compete by the end of this year, but a number of lawsuits have been filed to block the transaction. My fellow Fool Kelli Bhattacharjee notes that Kroger may also acquire Great Atlantic & Pacific Tea Company, which operates several smaller Northeastern grocery chains, to increase its market penetration in this region as well.

Despite wobbly economic indicators and a difficult grocery-pricing environment, Kroger has already outperformed its rivals SUPERVALU (NYSE:SVU) and Safeway (NYSE: SWY), which have taken the opposite tack by divesting non-core assets. SUPERVALU recently sold off $3.3 billion worth of its properties, and Safeway has divested its Canadian business for $5.7 billion. Despite these big sales, both competitors maintain a much higher level of debt than Kroger, although SUPERVALU could, with greater streamlining, return to the yo-yo debt performance that has seen both it and Kroger bounce between zero and several billions in debt on a regular basis. Safeway, on the other hand, has run multibillion-dollar debts for years.

Putting the pieces together
Today, Kroger has many of the qualities that make up a great stock, but no stock is truly perfect. Digging deeper can help you uncover the answers you need to make a great buy -- or to stay away from a stock that's going nowhere.