Please ensure Javascript is enabled for purposes of website accessibility
Log In Help Join The Motley Fool
Free Article Join Over 1 Million Premium Members And Get More In-Depth Stock Guidance and Research
By Dan Moskowitz - Sep 28, 2013 at 9:00AM

This company has consistently rewarded its shareholders for decades, and this trend is likely to continue.

Hormel Foods (HRL 0.50%) might not be the most talked about name on Wall Street, but it deserves more attention than it receives. This is a company that has navigated its way through difficult economic times without much of a problem at all.

Of course, Hormel Foods operates in an industry where demand will always be high. After all, we must eat to survive. Hormel Foods, however, takes it one step further by constantly finding ways to improve its top and bottom lines, consistently returning capital to its shareholders, and outperforming its peers.

Recent results and expectations
Below are third-quarter net sales and operating profit growth percentages on a year-over-year basis:

Grocery products performed well for several reasons, including the introduction of Compleats breakfast trays, MVP snack kits, and strength in Skippy peanut butter, which was acquired in the second quarter. These new additions to the grocery-products segment are expected to help boost sales going forward.

Rising pork costs negatively affected margins in refrigerated foods, but this trend is expected to moderate. And with new product introductions like Hormel REV Wraps and Hormel Fire Braised Meats, the potential for sales growth increases.

Hormel Foods feels as though Jennie-O Turkey Store has turned the corner, which is evidenced by the numbers in the chart above. Further improvements are expected, but with corn and soybean input costs likely to remain volatile, the bottom line is somewhat vulnerable.

The outlook for the specialty-foods segment isn't so hot, which primarily relates to the expired contract to sell Splenda in food-service channels. To pour some salt (or sugar) on the wound, material costs are expected to remain high.

All of this is impressive, but there's something even more impressive about Hormel Foods.

Best of the best
This is a highly competitive arena, yet Hormel Foods remains unfazed. Two other big names in the industry are ConAgra Foods (CAG -0.14%) and Tyson Foods (TSN 1.36%). All three are high-quality names, and all three are likely to offer good long-term investment opportunities. However, as Hormel Foods and Tyson Foods quietly go about their business (for the most part), ConAgra finds itself at the center of much attention. The spotlight relates to last year's acquisition of Ralcorp, putting ConAgra in the private-label business.

The general consensus is that ConAgra will suffer from this deal for several years, but that it will eventually pay off, potentially in a big way. The problem for ConAgra was the cost of $6.8 billion, which is a big reason why ConAgra now has a debt-to-equity ratio of 1.8, above the industry average of 1.1, and not nearly as comforting as the debt-to-equity ratios for Hormel Foods and Tyson Foods of 0.1 and 0.4, respectively.

The debt management at Hormel Foods is exceptional, as the company is capable of growing without adding any excess burden on itself. Most importantly, while ConAgra is likely to remain a quality long-term investment, Hormel Foods offers growth potential without such a significant near-term headwind. Also take a look at how well Hormel Foods has performed on the top line over the past decade: 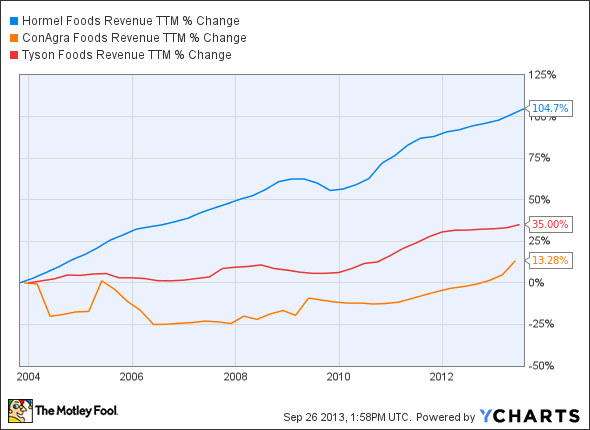 And on the bottom line: 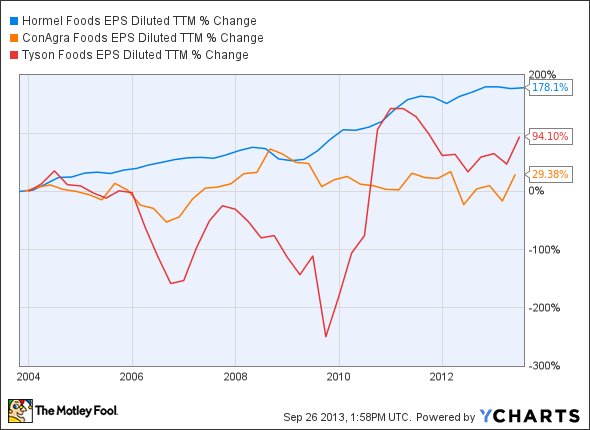 All three companies have performed well, but Hormel Foods is consistently the steadiest performer. Also consider some key metric comparisons:

Hormel Foods turns the most revenue and investor dollars into profit, and it offers the best debt management. ConAgra offers the highest yield, but keep in mind that that interest expenses from the company's high debt load could pressure cash flow.  As far as Tyson Foods goes, it's relatively solid across the board, just not quite as impressive as Hormel Foods.

Time for dessert
Hormel Foods offers just about everything, including top- and bottom-line growth, strong historical performance, a somewhat generous yield, quality debt management, as well as product and geographic diversification. All factors considered, Hormel Foods has been, and should remain, one of the most reliable investments on the planet.