There are some interesting earnings being released this week that should offer up a few investment ideas and shed some light on which sectors are set to outperform in the fourth quarter. Investors need to be selective, because the market has gone up significantly this year, while global GDP growth forecasts have been reduced. Consequently, valuations are likely to be high at precisely the point when some earnings might disappoint due to slower growth.

Monday
This morning saw shell egg producer Cal-Maine Foods (NASDAQ:CALM) deliver quarterly results. The company's earnings of $0.36 per share fell $0.13 short of analyst estimates. However, revenue of $319.5 million was up 17% from the year-ago quarter and well ahead of estimates of $272.9 million. This owed partly to the company's rising sales of cage-free, organic, and nutritionally enhanced eggs, which are growing ever more popular among consumers.

Cal-Maine is attractive for long-term investors, because it has the potential to grow irrespective of the economy. In other words, it gives you good diversification in your portfolio. Egg demand tends to be price-inelastic (i.e., demand doesn't change much in response to price movements), so when feed costs, rise Cal-Maine can usually pass on prices, albeit with some loss of margin. 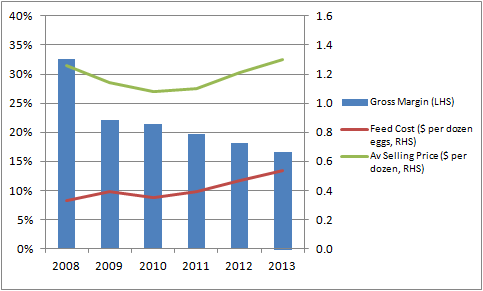 However, the key to its prospects is what happens with industry egg supply. Note that its gross margins were extremely high in 2008, thanks to the financial crisis (and high feed costs in the first half of 2008), making it difficult for less efficient egg-producers to obtain credit.

Cal-Maine directly benefited because it's the largest independent egg-producer in the U.S. In the longer term, Cal-Maine can profit from consolidating the industry via acquisitions and expanding its higher-margin specialty egg sales.

Small-business service-provider Paychex (NASDAQ:PAYX), due to report after today's market close, has long been a favored stock among dividend hunters, but it's also a great barometer of the state of the small and medium-sized business market.The key metric to follow is its checks-per-payroll number. Last quarter, its checks per payroll rose a miserly 0.9%, and it was even suggested that this growth would "moderate" in the quarter.

Furthermore, Paychex forecast that payroll services revenue growth would be 3% to 4% this year, but this is mainly due to price increases to customers rather than gains in checks per payroll. Look to see whether the price increases are sticking and the checks-per-payroll metric has improved. In addition, any update on its plans to develop an integrated management tool (so customers can use all of its separate services on one application) would be useful, too.

Tuesday
Lighting distributor Acuity Brands (NYSE:AYI) is one to watch because it is a direct play on a pick-up in construction activity in the U.S., as well as a backdoor way to play the increasing use of LED lighting solutions. Although management claims that its margins on LED lighting aren't any higher than on conventional lighting, it still has good growth opportunities. LED lighting will drive new demand, and Acuity is also able to sell LED lighting controls as an add-on solution.

The stock looks a bit rich going into these results, and Acuity tends to be volatile over earnings, so you need to be on your toes. One thing to look out for is its commentary on the state of the commercial and industrial lighting market. Architectural Billings Index data has perked up a bit lately, so the "favorable trend in June order rates" discussed previously might continue through the quarter for Acuity. We shall see. 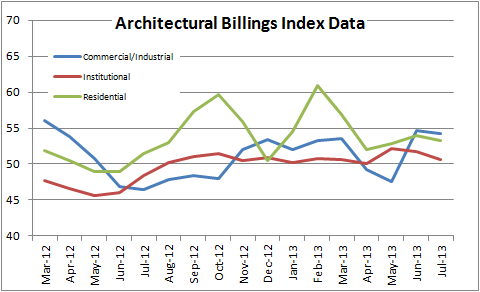 Source: The American Institute of Architects.

Pharmacy giant Walgreen (NASDAQ:WBA) missed earnings last go-round, and the key thing to look out for in the upcoming results is whether its plan to revive store traffic and same-store sales growth is working. Last time, same-store sales came in at just 0.4%, with store traffic down 3.9%. In response, Walgreen initiated a renewed focus on pricing and promotions in mid-May, and since then conditions have improved. For example, comparable-store sales increased 4.8% in August, and its basket size, or average transaction value, increased 3.7%. On a more negative note, customer traffic was down 1.5% in August.

Watch to see whether the increased sales came at the expense of margins. Another thing to look out for is Walgreen's commentary on its balanced reward card program. Walgreen is trying to gather data from the cards so it can better target sales promotions.