Shares of farm equipment maker Deere (NYSE:DE) haven't done well in the past several months. The company's stock fell by nearly 6% between May and September, despite its steadily rising revenue and profit margin. Let's see what challenges have kept Deere's shares depressed, and whether it's worth having in your portfolio.

We'll start with Deere's latest earnings reports and outlook for 2013. During the second quarter, the company's revenues grew by 4.3%. Most of its growth in sales was due to the rise in its agriculture and turf business segment; its revenues increased by 7.9% during the quarter. The growth in sales was mainly in North and South America due to higher shipment volumes and price gains. These gains were offset by rise in expenses such as production, selling, and GNA.

Conversely, its revenues in construction and forestry fell by 5.7%. Deere still projects that its equipment sales will increase by 5% during the year.

In comparison, other leading heavy equipment companies weren't able to show such growth in sales. Caterpillar (NYSE:CAT) reported a 15.85% drop in sales in the second quarter, and Cummins (NYSE:CMI) recorded only a 2% gain in revenues in the quarter.

For these companies, the outlook moving forward isn't any better; Caterpillar's outlook for 2013 was revised down and the company currently projects its revenues will decline by 12% to 15%; its earnings per share will fall by around 23%. Cummins management expects its revenues to remain flat in 2013 (compared to 2012) and its EBIT profitability will remain around 13%-14% (which is close to last year's EBIT). This puts Deere in a better light as a investment compared to the aforementioned companies in terms of potential growth in sales.

The ongoing rise in Deere's revenues is also reflected in the company's profit margin, which has remained higher than other heavy machinery companies. Deere's profit margin reached almost 15.5% in the last quarter, which is roughly the same profitability recorded in the previous quarter. The company's slight decrease in profit margin in agriculture and turf has offset the rise in construction and forestry 's profitability.

The chart below compares the changes of leading heavy equipment profit margins in the past several quarters: 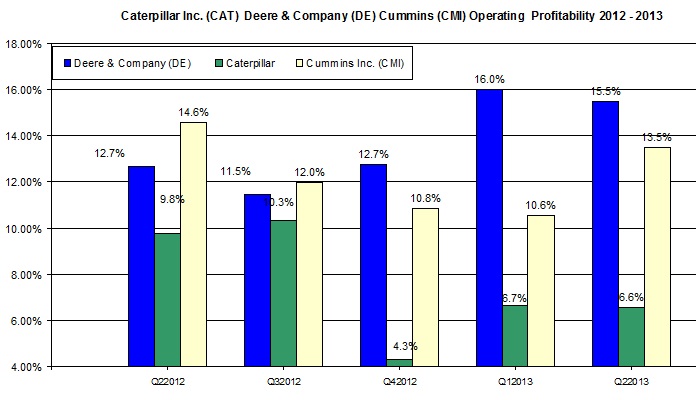 As seen in the chart, Deere is leading the way in this category. Cummins' profit margin is lower than Deere's at nearly 13.5%. Caterpillar's profit margin was the lowest at 6.6% in the second quarter of 2013.

Let's take a closer look at the two main business segments Deere operates: agriculture and turf, and construction and forestry.

Agriculture and turf
This segment was responsible for the company's rise in revenues. The segment grew by 7.9% in the past quarter and by 10.2% in the past six months. This segment is also leading the way in terms of profitability; in the recent quarter, the segment's profit margin reached 17%. Looking forward, in the U.S and Canada sales are projected to rise by 5%. Most of the growth is expected to come from Brazil, however.

Brazil's progress
The company expects South America to play a big role in terms of growth in sales. Deere projects that it will increase its agriculture and turf sales by up to 20%, with Brazil leading the way. Since the agriculture and turf segment accounts for roughly 78% of its total revenues, this puts Brazil an important country in maintaining Deere's growth in revenues.

In this regard, the IMF has recently revised downward its outlook for Brazil's economic growth by reducing Brazil's GDP growth rate for 2013 and 2014.  If this projection is true, it could also suggest that Deere's sales in Brazil won't expand as fast as Deere's management estimates.

Another issue is the Brazilian real, which has sharply depreciated against the U.S. dollar during the year. The company projects unfavorable changes in currencies will cut growth in revenues by 1% during 2013. This figure could be higher if the real further devalues against the dollar.

Besides agriculture and turf,  the company also has the construction and forestry segment that accounts for 16% of its revenues. Let's examine how this segment will affect its revenues and profit margins.

Construction and forestry
Deere expects this segment to contract by 8% in 2013 due to slow economic growth in the U.S. The segment fell by 8.6% in the first half of the year, which is roughly in line with company's outlook.

After examining Deere's operations, let's examine its valuation compared to the industry and other heavy machinery companies.

Valuation
The enterprise value and Deere's EV-to-EBIT ratio will provide a back of the envelope calculation for Deere's valuation.

The table below shows the summery of data of Deere, Caterpillar, Cummins and the average of the machinery industry:

This calculation accounts for these companies' different financial structures, including their debt and cash. The yearly EBIT is based on the past four quarters (ending in the second quarter of 2013). As seen in the chart, Deere's EV-to-EBIT ratio is the lowest at 10.24. Caterpillar, on the other hand, has a slightly higher EV-to-EBIT ratio than the industry average. Based on Deere's current valuation, outlook, profit margin, and financial situation, the company is slightly undervalued compared to its peers in the heavy machinery industry.

Takeaway
The strong growth in Deere's revenues compared to other leading companies such as Caterpillar is likely to keep Deere a strong investment. Moreover, Deere's current valuation isn't high, which also suggests the company is a reasonable investment.

On the other hand, Deere's construction and forestry segment hasn't improved. This could continue to drag down the company's sales and profit margins.

Finally, the company's reliance on Brazil to expand its operations also entails risk with respect to the country's macroeconomic growth, currency, and stability. These factors should be taken into account when investing in the company.

What Are the Challenges That Deere Faces? @themotleyfool #stocks $DE $CAT $CMI Next Article
Current