Eli Lilly (NYSE:LLY) has had a rough year compared to its peers in the pharmaceutical industry. The company's foreseeable future has been darkened by the patent expiration of its top-selling product, Cymbalta, and a series of disappointing pipeline failures. To compensate for these problems, Lilly announced cost reductions and a big stock buyback to appease investors. 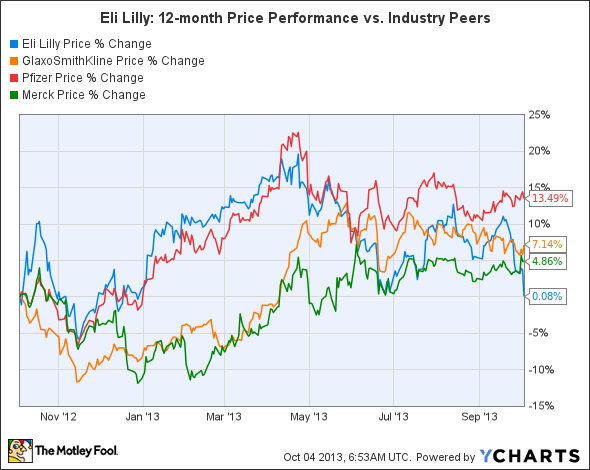 Unfortunately, these actions may be too little, too late for Eli Lilly, which might need to make more drastic workforce reductions and R&D restructuring efforts to remain competitive.

A fundamental analysis
To better understand why Eli Lilly has underperformed larger pharmaceutical companies like GlaxoSmithKline (NYSE:GSK), Pfizer (NYSE:PFE), and Merck (NYSE:MRK), we should take a closer look at its fundamentals.

Eli Lilly posted decent top and bottom line growth last quarter, but its negative 5-year PEG ratio indicates negative earnings growth ahead. Meanwhile, its forward P/E suggests the stock is trading at a premium to its industry peers, although its earnings are expected to decline much more dramatically.

A look at Lilly's top 10
To understand the challenges facing Eli Lilly, we should take a look at its top 10 drugs.

Eli Lilly's biggest problem is Cymbalta, which lost its patent exclusivity earlier this year. Generic versions of the drug are expected to reduce its global revenue by 20% in 2014. To make matters worse, the first patents for Evista expired last July, and the most crucial ones will expire in March 2014. Meanwhile, sales of Zyprexa fell 25% last quarter due to generic competition.

Those three drugs accounted for over a third of Lilly's top line last quarter.

Lilly's conservative cost reductions
Faced with those inevitable losses, Eli Lilly is trying to find ways to reduce costs. It froze the pay for most of its workers and executives, in an effort to save $400 million by 2016. The company also laid off 1,000 sales representatives across the U.S.

Unfortunately, the math doesn't add up -- whereas Lilly is talking about hundreds of millions in savings, Lilly faces losses in the billions next year. Therefore, CFO Derica Rice's statement that the company "can and will take additional actions" to reduce costs seems to be an inevitability rather than a possibility.

To appease investors, the company recently announced a $5 billion buyback over the next few years. However, that money could probably have been better spent toward improving its R&D operations to break Lilly's dismal streak of pipeline failures.

In June, Lilly reported that its experimental Alzheimer's treatment had failed a phase 2 trial due to patients developing liver problems. The drug was intended to prevent the formation of the brain plaques that are believed to be the cause of Alzheimer's -- a substantially different approach from a prior failed treatment from J&J and Pfizer, which attempted to clear out the plaques instead.

On Sept. 30, Lilly suffered yet another setback when Amyvid, its imaging agent for Alzheimer's, was rejected for Medicare reimbursements for the majority of Alzheimer's patients.

These three products will define Lilly's future
For now, Eli Lilly is betting its future on three pipeline products -- the cancer treatment ramucirumab, and the diabetes treatment's empagliflozin and dulaglutide.

Ramucirumab is an angiogenesis inhibitor which halts blood vessel growth to cancer cells to prevent them from spreading. Lilly was originally pursuing the approval of ramucirumab for colon, liver, lung, stomach, and breast cancer.

After its phase 3 trial, however, Lilly announced that it would not pursue the approval of ramucirumab for breast cancer due to a lack of a survival benefit -- giving up on a market worth $600 million in annual sales, according to Sanford Bernstein analyst Timothy Anderson. However, the treatment has shown promise as a stomach cancer treatment.

Meanwhile, empagliflozin is a SGLT2 inhibitor, a new class of diabetes treatments, which helps patients excrete more glucose through the urine. However, Eli Lilly's treatment is just one of many SGLT2 (sodium glucose linked transporter) inhibitors vying for a piece of the market, after the FDA approval of J&J's Invokana in March. Invokana is currently the only approved SGLT2 inhibitor on the market.

Eli Lilly's brightest hope is dulaglutide, a once-weekly diabetes drug that helps increase the release of insulin after meals and slowing the absorption of food through the intestinal tract. If approved, it will compete against Bydureon, from Bristol-Myers Squibb and AstraZeneca, and Victoza, from Novo Nordisk. Anderson believes that if approved, dulaglutide could generate peak sales of $1.7 billion by 2020.

The Foolish takeaway
In my opinion, Eli Lilly is walking on a tightrope, and asking the investors that it is carrying on its back to not look down.

Lilly's history of pipeline failures suggests that it may need an overhaul, on par with Merck's, to get its R&D back on track. The company's conservative cost cutting initiatives also suggest that it is reluctant to make the major cuts necessary to preserve its bottom line. Therefore, it might be wise for investors to avoid Eli Lilly until it can demonstrate that it can really fill the void left by Cymbalta, Evista, and Zyprexa.