Autumn has just begun, but it is never too early to start considering which companies are poised to boost investor portfolios during the Christmas shopping season. With the United States' toy industry being an extremely saturated market, international growth will continue to be a key factor in driving the profits of toy manufacturers moving forward. Let's examine three toy companies that are primed for future success both in the United States and abroad, as well as one toy company to avoid.

Consider Mattel's steady rate of revenue generation from areas outside of the United States. According to fellow Motley Fool analyst Bob Ciura:

Mattel's international segment grew sales at a 4% rate last year, double its performance from North America.A similar trend occurred this year, as Mattel has posted 4% growth in international markets over the first half of 2013.

This key statistic, as well as Mattel's healthy and increasing dividend payout ratio and strong position in the United States, should prove attractive to value investors and dividend stock seekers.

LeapFrog has seen comparatively explosive growth in its international segment. The company's products have wide appeal, with audiences seeking to learn English as well as LeapFrog's "native language" products. LeapFrog has enjoyed eye-popping international growth rates of 28% and 38% in 2011 and 2012, respectively.

LeapFrog has experienced some price volatility due to concerns over its competitive position. With few barriers to entry in the educational tablet market, LeapFrog is a much riskier bet than Mattel, but has carved out a niche for itself in its sector. Expect LeapFrog's international growth to continue to grow along with its stock price once investors' fears subside.

One strong company struggling internationally
Hasbro (NASDAQ:HAS) is another strong household name for investors to consider. The company, along with Mattel, has a preeminent position in the North American market and touts an impressively consistent dividend payout. However, Hasbro's struggles internationally are a cause for investor concern.

Hasbro's sales in its international segment actually declined by 4% in 2012, including a surprising decline in its Asia Pacific segment. In fact, Hasbro's international growth has under-performed for several quarters now. The company has posted a 2% net sales decline through the first half of the current year, including a 6% drop in international sales in the second quarter.

While Hasbro has had its share of difficulties internationally, it still appears to be a good dividend stock and a solid player in the North American market. Mattel is the stronger player of the two North American toy juggernauts, but that doesn't mean Hasbro should be counted out just yet.

One toymaker to avoid
Investing in toymakers isn't child's play: toy manufacturing is a competitive space with few barriers to entry. One company that illustrates the harsh nature of the toy market is JAKKS Pacific (NASDAQ:JAKK).

At first JAKKS Pacific might appear to be an intriguing stock pick. The company has a wide, diverse toy lineup, and franchise agreements that include Batman, Disney Princesses, Creepy Crawlers, SpyNet, and Dora the Explorer. With shares currently hovering at a paltry $4 plus change, some might be excited by the idea of owning many shares of JAKKS Pacific.

However, JAKKS Pacific's stock has been consistently declining for very good reasons. The company has suffered through significant declines in revenue, a blizzard of lawsuits, and ever-rising production costs. These factors, along with JAKKS' negligible international presence and a shrinking dividend, sends warning signals for me to stay away for now. 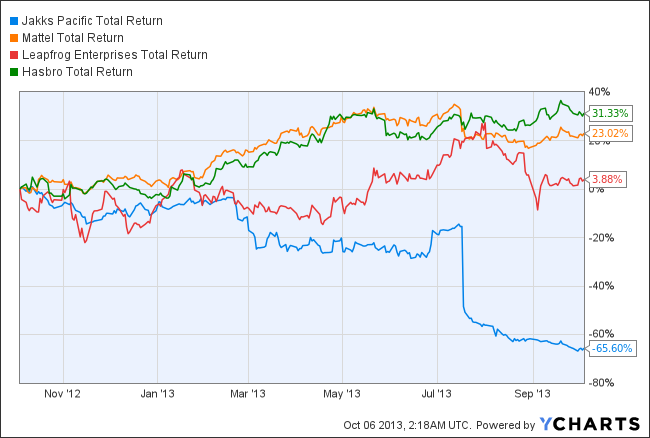 Conclusion
Mattel, LeapFrog, and Hasbro are three big-name toymakers that are worthy of investor consideration. Mattel and Leapfrog, in particular, have demonstrated remarkable strength in the international sphere. JAKKS Pacific, however, should be avoided unless the company can show signs of meaningful revenue generation. So be wise when asking Santa for your next "stocking" pick.