For investors looking for a small-cap company in a sector poised for extensive growth, Dril-Quip (NASDAQ:DRQ) is a growth-oriented, offshore oil and gas service company with many catalysts that will increase shareholder value.

This growth, led by the development of deepwater technologies, has created opportunities that in turn have reduced costs and increased safety. Because of these reasons, it has become economical for major E&P companies to pursue these deep-water reserves. To capitalize on this trend E&P companies such as Petrobras (NYSE:PBR), Chevron, Statoil and Royal Dutch Shell have increased their presence in deepwater regions. To support their deepwater growth, these major E&P companies along with others have significantly increased their deepwater capex spending outlook over the next four years. 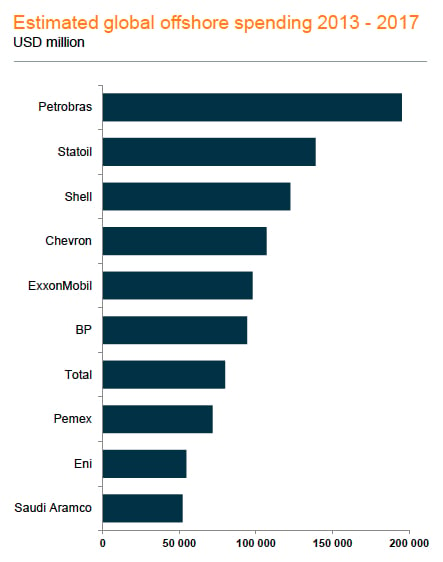 Dril-Quip revenue growth
Over the past year, Dril-Quip has signed two major contracts that will boost revenue and earnings over the next four years. In August of 2012,  Dril-Quip signed a $650 million contract with Petrobras to deliver deep sea wellhead systems and support for the massive reserves off the coast of Brazil. In March of 2013, Dril-Quip signed a contract to provide subsea wellheads, tensioner systems, risers, production trees, injection trees and tieback connectors with Royal Dutch Shell in Malaysia. Delivery of these systems is expected to begin in 2014. 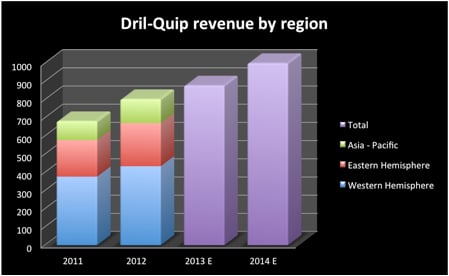 Led by the global demand for offshore drilling and the equipment that supports the drilling process, Drip-Quip is expected to reap the rewards of this trend. Between the years 2010 and 2014, Drip-Quip revenues are expected to increase from $601 million to an estimated $1.0 billion in FY 2014. This represents an increase of 66.39%. 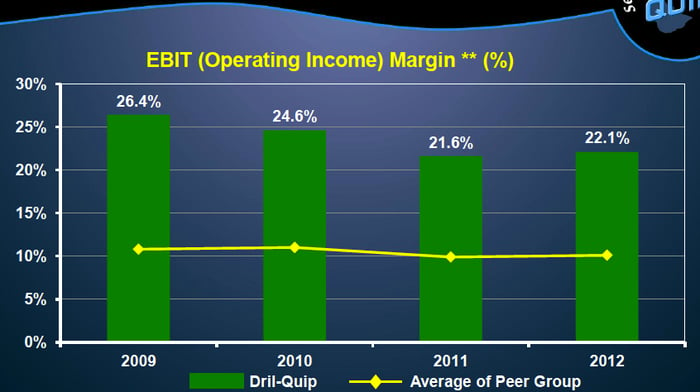 In comparison to its closest competitors, FMC Technologies (NYSE:FTI), Aker Solutions, and Cameron International (NYSE:CAM.DL), Dril-Quip's earnings before interest and taxes are significantly higher. Because Dril-Quip's manufacturing operations are vertically integrated, with the company performing almost all of its forging, heat treating, machining, fabrication, inspection, assembly, and testing at its own facilities, this reduces costs and improves efficiency. This internal structure gives the company a competitive advantage over its peers. As revenues are expected to increase due to the global demand for energy, Dril-Quip's bottom line will improve substantially due to the company's vertically integrated structure.

With the global demand for offshore oil and gas increasing along with Dril-Quip's advanced subsea technologies, combined with the company's vertically integrated structure, this company has substantial catalysts to create shareholder value; it has also been a target of takeover talks.

Takeover target?
For many years Dril-Quip has been on the receiving end of many takeover conversations. Over the past month or so, rumors have picked up over GE Oil and Gas (a subsidiary of General Electric) leading a takeover of Dril-Quip. GE Oil and Gas has been no stranger to the takeover business: Since 2007 the company has made more than $14 billion in corporate acquisitions. If Dril-Quip were to be taken over by GE, the shareholder would almost certainly receive a generous premium.

Foolish conclusion
As Dril-Quip has many catalysts for growth, including global offshore spending, the need for the subsea equipment and systems, and the efficient internal structure that management has set up, this company is poised for significant gains over the next couple of years. Recently, there have been many accounts of General Electric having interest in taking over this company. Because this company is well run and has significant upside, it is easy to see why it would be a takeover candidate.