Although they've largely been characterized as another "disappointing" effort due to continued fallout in China, are Yum! Brands' (NYSE:YUM) third-quarter results actually disastrous? Have they ruined its reputation beyond repair?

An argument can certainly be made that that's the case. The owner of KFC, Taco Bell, and Pizza Hut is witnessing the continued flight of its customers in China, a trend that may prove irreversible. Same-store sales plunged following a supplier problem last year and the outbreak of avian flu earlier this year. Whereas many global brands are seeing Chinese consumers turn to them in lieu of local producers due to a belief in their supposedly safer, better, and higher-quality goods, Yum! is deriving no benefit, and is instead lumped in with tainted domestic producers.

Earlier this summer I noted how such global giants as Nestle, Abbott Labs, and New Zealand-based Fonterra have been the beneficiaries of fears among Chinese mothers turning to them for infant formula after local producers like Synutra, Feihe International (formerly the oddly named American Dairy), and China Mengniu Dairy were accused of mixing in hazardous chemicals like melamine to increase apparent protein levels and selling fake milk powder that caused the deaths of more than a dozen infants and left thousands with kidney damage.

The Western companies saw demand soar and prices rise by as much as 30% as a result, going so far as to set the price of foreign-made formula at double the price charged in Western countries. Even that didn't slow Chinese consumption; Chinese families had relatives in far-flung countries buy up formula and send it back home.

There's so much opportunity that investment house KKR is partnering again with private equity firm CDH Investments to invest in Modern Dairy, China's largest unpasteurized-milk producer. Even with Fonterra's recent botulism scare, there's still plenty of opportunity for foreign companies to capitalize on China's distrust of local producers. According to the BBC, international companies are among the most trusted brands in China today, with seven of the top 10 being U.S. brands and 13 of the top 20 being American.

And Yum!'s growth in China over the past two decades or so since opening its first KFC outside of Tiananmen Square has been nothing short of phenomenal, with more than 4,460 restaurants today. But that's now in jeopardy as the restaurant chain reels from problems of its own creation as well, as external forces over which it has little control, including the outbreak of avian flu.

In December, its suppliers were accused of giving chickens unapproved levels of antibiotics and a drug used to treat Parkinson's disease that's banned for use in food. Then earlier this year it was revealed that ice cubes it was serving at some Chinese locations were dirtier than toilet water. The impact was swift: In April it began detailing a sure and steady decline in monthly same-store sales. 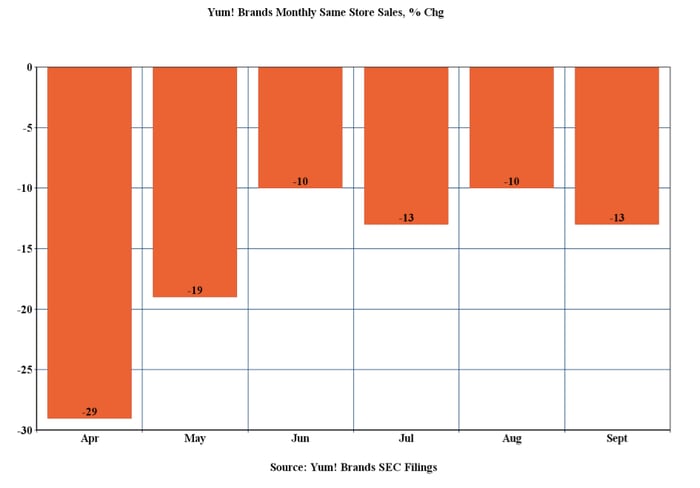 While the worst effects may have been felt early on, it's clear customers are still not returning to its stores. While Yum!'s management initially put up a brave front, saying it anticipated comps would turn positive again by year's end, it's now abandoned all pretense and says that might not happen until next year. Along with the sales drop, profits are also looking worse; full-year earnings will plunge by as much as double-digit percentages, despite its previous outlook predicting they'd only drop by mid-single digits.

With pressure coming from rival McDonald's, which is introducing new products to steal market share from Yum!; Burger King Worldwide, which plans on opening as many as 1,000 restaurants in China over the next five to seven years; and domestic fried chicken rivals like Country Style Cooking Restaurant, which saw sales jump almost 21% last quarter, the chicken king that ruled the roost may have finally had its feathers plucked.

I predicted that this wouldn't be a short-lived phenomenon, and warned about Yum! possibly laying an egg this quarter. Its stock has tumbled almost 10% in midday trading Wednesday. With half its sales and almost as much of its operating profits coming from China, I don't expect Yum! Brands to become a tasty morsel for your portfolio anytime soon.