At the end of June I wondered aloud which company would eventually land Hess' (NYSE:HES) extensive East Coast terminal network. Hess had just put them on the auction block as part of its transition into a pure-play exploration and production company. Finally, after three months of waiting we have that answer and it comes as no surprise to me.

In my previous article I had considered the three main companies that were rumored to be interested. However, I came away thinking that only one made sense: Buckeye Partners (NYSE:BPL). I went so far to say that, "if I were a betting man, I'd pick Buckeye as the most logical destination for Hess' terminal network." Too bad I didn't actually make that bet because in the end it was Buckeye that ended up buying Hess' terminals.

The $850 million deal will see Buckeye pick up 20 liquid petroleum terminals from Hess with total storage capacity of 39 million barrels. Of these, 19 are located in the U.S. with the final terminal located on St. Lucia in the Caribbean. It's a great strategic fit for Buckeye.

The following map details the locations of the Hess network: 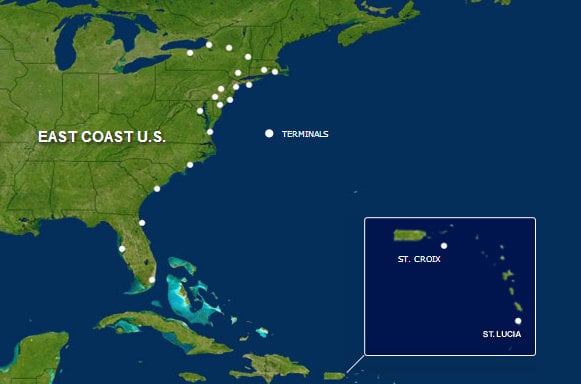 As the map shows, the 19 domestic terminals are located in the New York Harbor, Upstate New York, Mid-Atlantic and Southeast. All but two of the facilities are marine terminals and a dozen have deep-water access. As the next map shows, these assets both compliment and extend Buckeye's own terminal network. 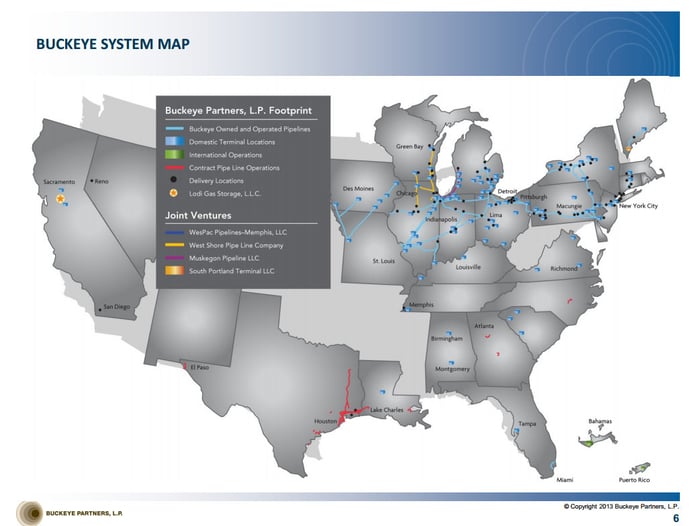 Overly these two maps and its easy to see the compelling strategic rationale behind this deal. However, there is one other asset that Buckeye is picking up worth noting and that is Hess' St. Lucia terminal. This is actually why this deal makes so much strategic sense for Buckeye as it already owns two terminals in the Caribbean. The addition of the St. Lucia terminal adds 10 million barrels of crude oil and refined products storage as well as deep-water access. It will allow the company to accommodate a larger portion of the growing Latin American crude oil production volumes. Its really building out a top-tier position in the region.

Not only that, but Buckeye has a history of creating value when it acquires terminals. It's able to do more with them than the previous owners because its goals are income as opposed to support. For example, back in 2011 it bought $165 million in midstream assets from BP (NYSE:BP). At the time, BP was looking to cash in on some of its non-core assets in order to bolster its balance sheet following the disaster in the Gulf of Mexico. In just one year Buckeye was able add 32 new third-party customers, which enabled it to grow EBITDA from the acquired assets by 34% in just one year.

I'd expect Buckeye to do the same thing with the acquired Hess assets. While the foundation is a multi-year storage and throughput commitment from Hess to secure the cash flow, real value will be created as Buckeye adds customers and grows the business. That's why this deal just makes so much sense.