Like the old Ritz crackers commercial said, "You can't get there from here." Iron ore miner Cliffs Natural Resources (NYSE:CLF) is finding it can't get to its Ring of Fire chromite mining and smeltering project in Ontario.

Located in the remote northern reaches of Canada in the James Bay lowlands, a two-hour flight from the nearest major city, Thunder Bay, the $3.3 billion chromite project is spread across three defined deposits that are in an advanced exploration stage. A key ingredient in the manufacture of stainless steel, chromite represents an attractive diversification opportunity for Cliffs, but to fully develop its interests it needs to gain access to the region. After all, these vast regions don't exactly have interstate highways rolling through them. 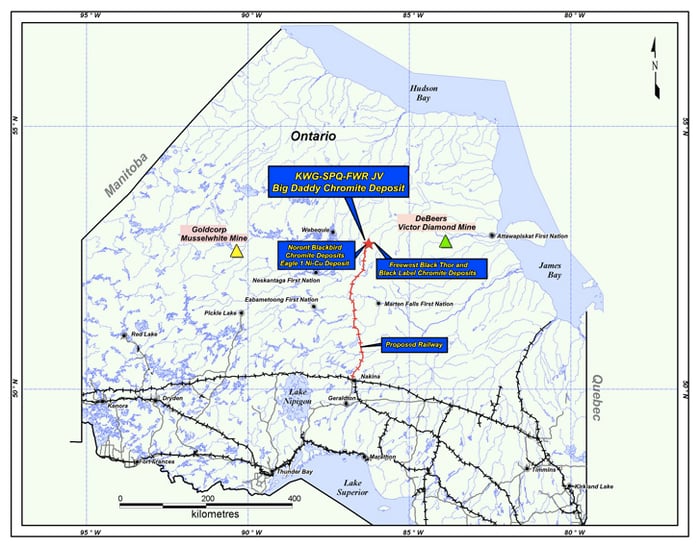 So with a conditional agreement with the Ontario government for financial assistance, Cliffs proposed the construction of an all-weather north-south ore-haul road. There was a slight problem with it, however: the best feasible route to reach the chromite project runs right across mining claims belonging to KWG Resources and other resource companies.

While the two miners had once been chummy, and each has stakes in the same claims -- KWG has a 30% interest in the Big Daddy chromite deposit; Cliffs owns the other 70% -- there was a falling out over which deposit to develop first, and the two have since become bitter rivals.

That put Cliffs in the position of having to come hat in hand to ask permission from KWG to build the road across its property. KWG rejected its proposal, as it has its own transportation plans: a railroad that would run south to Exton, Ontario. It will be more expensive to build than a road, but cheaper to operate over the long haul. According to Tetra Tech, the road would cost $60.78 per tonne, compared to just $10.50 per million tonnes shipped annually. If 5 million tones are shipped, the costs plunge 40% more for rail, but just 2% more for the road.

Cliffs appealed to Canada's Mining & Lands Commission for an easement so it could reach its project, but the commission ruled last month that doing so would interfere with KWG's ability to work its claims since "numerous heavy trucks (passing) every day" would cover up future drilling and sampling sites.

There is another way into the region, one that was proposed by Noront Resources, another miner with claims in the area. It would involve an east-west road to link up Noront Resources' Eagle's Nest project with a highway some distance away, but, as there's only room enough for one transportation system in the region, the idea has been on ice.

With the north-south road seemingly dead, the east-west passage may be Cliffs' only alternative; for now, the miner has suspended all environmental assessments until it appeals the commission's latest ruling. As Cliffs noted, "Without access to the surface lands to develop the needed infrastructure, there is no project."

Not that any of these transportation plans will necessarily work out in the end. In addition to the competing mining claims, there are environmental concerns -- the routes sit atop a glacial esker, a ridge of sand and gravel deposited by glacial meltwater streams -- as well as indigenous tribes that aren't exactly supportive of any of the development projects. So as it stands now, Cliffs Natural Resources is on the road to nowhere.