Please ensure Javascript is enabled for purposes of website accessibility
Log In Help Join The Motley Fool
Free Article Join Over 1 Million Premium Members And Get More In-Depth Stock Guidance and Research
By Steve Heller – Oct 12, 2013 at 10:00AM

Let’s take a moment to reflect what has made the world’s greatest social network so great.

Facebook (META 2.00%) has experienced incredible growth since it was founded in February 2004. Let's take a moment to reflect what has made the world's greatest social network so great.

1,154-bagger
By the end of 2004, Facebook had a respectable 1 million monthly active users, or MAUs, as it began expanding its reach to more colleges and universities around the U.S. With more than 1.15 billion strong today, Facebook has experienced user growth 1,154-times over that humble beginning. Simply astonishing. 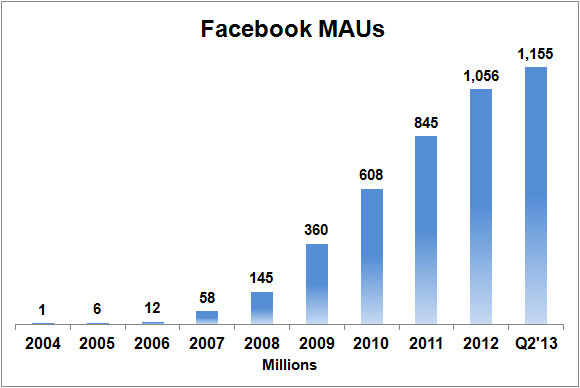 Cha-ching!
In Facebook's first year of existence, the company brought in $382,000 of revenue, breaking down to $0.38 per user, a metric formally known as average revenue per user, or ARPU. ARPU is a great way to get a handle on how Facebook's revenue is trending on a per user basis because it normalizes user growth and gives insight into its ability to monetize users. 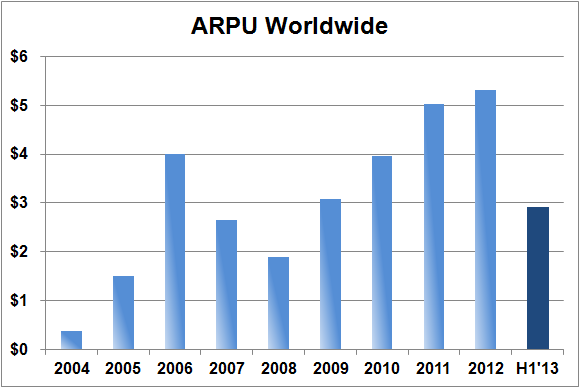 Clearly, Facebook had a bit of growing pains between 2006 and 2008 when MAUs exploded from 12 million to 145 million. Since then, it seems that Facebook worked through the kinks and has been able to scale up its marketing prowess to accommodate a much larger audience. For the first half of 2013, Facebook's APRU increased by more than 17% over the same period in 2012.

Glued to the screen
By dividing the number of daily active users, or DAUs, into the number of MAUs in a given period, investors can get a good sense if Facebook is creating a more engaged audience over time. From the investor perspective, you'll want to see this ratio growing over time since it creates more opportunities to deliver compelling ads. 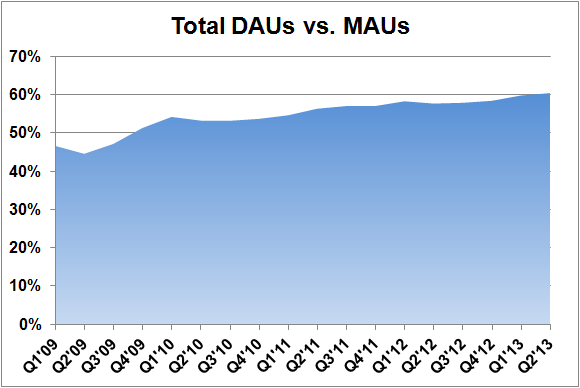 In addition to converting MAUs into DAUs over time, it's also encouraging that Facebook's total share of time spent on the Internet is on the rise. According to the most recent data out from comScore, time spent on Facebook in the U.S. grew by 500-basis points to 15.8% since December 2012 . For those wondering, Facebook is ranked the No. 1 web property in the U.S. where users spend their time.

Turning threats into opportunities
As I'm sure you've heard by now, Facebook turned the threat of mobile devices cannibalizing its desktop business into a massive opportunity in just five quarters. During this time, Facebook's mobile advertising revenue grew from 3% of total advertising revenue to 41%. Not only does this speak to management's ability to react swiftly to changes in user behavior, it demonstrates the often difficult-to-measure value of its incredible "can-do" culture. 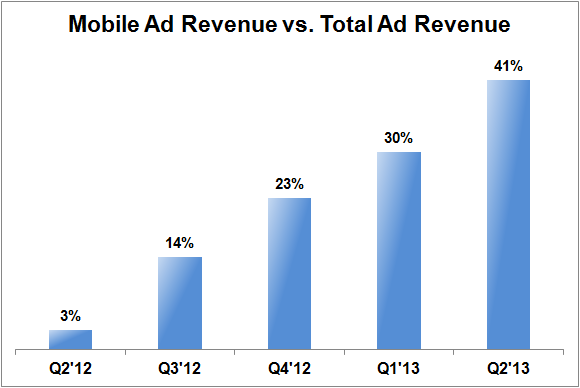 And good thing it was able to thwart off the growing "threat" mobile... 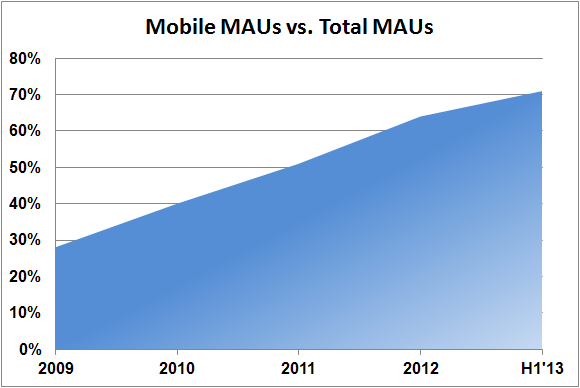 In the black
After five years of existence, Facebook turned its first annual profit in 2009, and it hasn't looked back ever since. 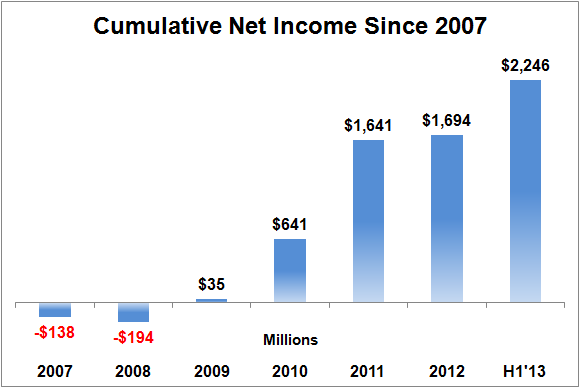 On another level
When a business has a higher purpose, it often lessens management's temptation to play the game of exceeding Wall Street expectations in the short-term, liberating the organization to remain focused on fulfilling its long-term objective. Organizations that operate in this manner make decisions that are in the best interest of fulfilling their purpose, and not in the best interest of shortsighted stakeholders. In the long run, this approach can pay off handsomely for shareholders because organizations with this level of consciousness understand that fulfilling its purpose will ultimately lead to enduring prosperity.

Over the next decade, I'm confident Facebook will continue growing in ways that astound investors largely because it's a purpose-driven organization, obsessed with fulfilling its mission of giving people the power to share, making the world more open and connected. At the end of the day, Facebook will meticulously continue perfecting how users connect with one another and that'll be the ultimate driver of its business.

Here's to the next decade of purpose.