Broadband Internet demand in the U.S. is stronger than ever. The number of broadband connections in the U.S. reached 82.4 million in May, and in the first three months of 2013, broadband providers added 1.1 million new connections. 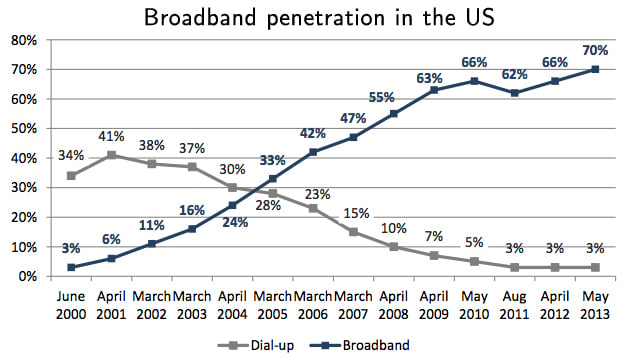 The market is now dominated by cable and phone companies. About 47.5 million broadband subscribers are handled by cable companies, and the rest belongs to phone carriers. With more than 16 million subscribers, AT&T (NYSE:T) is leading the market.

However, there is an important challenger, Google (NASDAQ:GOOGL), which recently launched its Google Fiber service, offering 1GB Internet service for $70 a month. And there's cable company Comcast (NASDAQ:CMCSA), which has been improving its network constantly in recent years. Which player will win the U.S. broadband market?

It's all about competitive advantages
In the increasingly fierce broadband market, companies need to differentiate their products as much as possible. One way to achieve this is by maximizing the speed and reach of broadband service.

To win the race for faster home broadband, AT&T recently launched its 45-Mbps U-Verse broadband service in 40 new markets, at a cost of about $50 per month. In the future, the company wants to offer its U-verse service at speeds of up to 100 Mbps.

However, the most ambitious broadband project belongs to Google. Its Google Fiber project promises to provide a connection 100 times faster than today's average speeds. In Kansas, Google Fiber already provides a 1,000 Mbps connection for $70 per month. To cross-sell Google Drive, the company also includes 1 terabyte of cloud storage in its Internet service.

Google Fiber will become a disruptive force in the broadband market, but because Google needs to build an entirely new infrastructure in each city, it will take many years and many dollars before this project can have a massive reach. Investment banking company Evercore Partners estimated that Google would need approximately $7 billion to reach 8 million U.S. homes.

AT&T won't sit idly by. Right after Google announced plans to expand Google Fiber in Austin, AT&T announced its GigaPower competing service, which will go live in the same city starting Dec. 1, way sooner than Google Fiber. But unlike Google, it seems AT&T will only be able to provide a 300-Mbps connection.

Notice that Google's promising project is a massive engineering challenge, and that the company will have to reach millions of households and business customers for the first time, while AT&T already has done this.

Considering these factors, Google Fiber may not pose a challenge to AT&T's business in the short term. But in the longer term, it will change the market and have direct influence on AT&T's pricing and margins. To protect its overall profitability, AT&T is investing heavily in its wireless network, where scale advantages allow the firm to both capture market share and increase margins.

Cable company Comcast, which excels at cross-selling and offering multiple services over one connection, is also improving its network. Last month, the firm upgraded its Extreme 505 plan in some important cities to increase its maximum speed for residential broadband service, taking downstream speed from 305 Mbps to 505 Mbps. However, at $300 per month, its service may be too expensive to be competitive.

That being said, Comcast does have important competitive advantages in motion. With 140,000 miles of fiber stretching around the country, it has the largest fiber-optic network. And its $70-per-month TV and Internet plan is, at the moment, powerful enough for most households.

Final Foolish thoughts
As customers rely more on the Internet to watch TV, play games, interact, and work, connection speed -- and not price -- will become the most important factor in choosing your broadband provider.

Google Fiber will change the broadband market due to its amazing quality-price balance. However, it will take many years before Google Fiber can reach most important cities in the U.S. In the meantime, AT&T and Comcast are investing heavily in upgrading their networks. This competition has just begun.