Farmers have an incredibly daunting task ahead of them. Over the next 50 years they must produce more food than they have in the past 10,000 years. The combination of a growing global population, a rising middle class, and less arable land is quite a mountain to climb. It has many asking how on earth we are going to feed everyone.

The problem of population growth 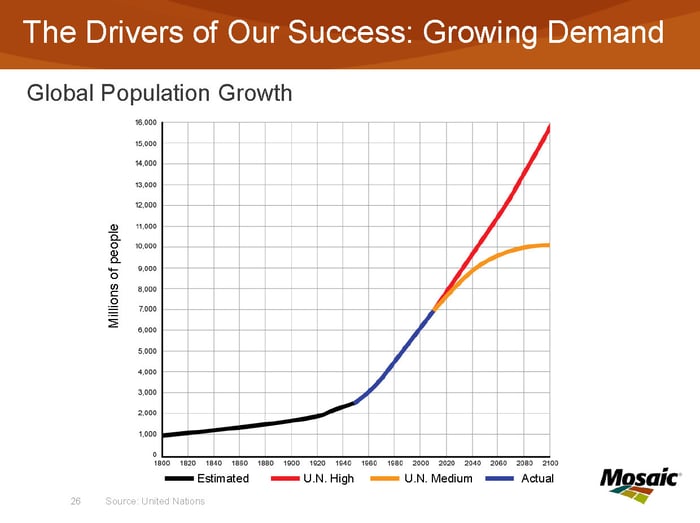 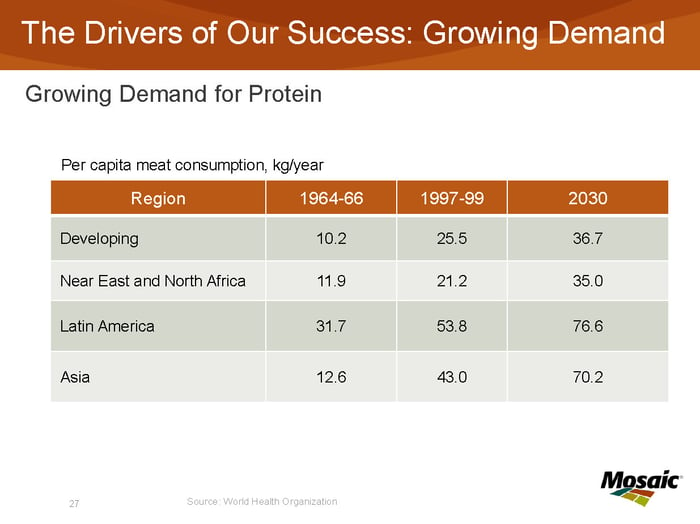 A key point here, however, is that pound for pound not all protein is the same. At Mosaic's (NYSE: MOS) most recent Analyst Day, CEO James Prokopanko put that into perspective when he noted that, "1 pound of chicken requires 3 pounds of corn, 1 pound of pork requires 4 pounds of corn, and 1 pound of beef requires 7 pounds of corn." The point being, as wealth increases so does the volume of food required to feed that person.

Less land to grow food
The other major issue facing farmers is less arable land with which to grow the increasing volumes of food. For example, in the 1970s there were about 0.32 hectares of available land per person. By 2030 that number is estimated to be just 0.17 hectares per person. That means farmers will need to produce nearly twice as much food per acre of land. It's a daunting task with no simple solutions.

Putting more food on the table
One solution, and granted it's a less palatable solution for many, is increased use of genetically modified seeds like those produced by Monsanto (NYSE:MON). While many don't like what it does, Monsanto does have a stated goal to double the yields of corn, soybeans, cotton and spring-planted canola by 2030. With so much food production needed in the future, genetically modified organisms will undoubtedly have some role to play.

The other solution, and one that's a much easier sell, is farmers' more widespread use of crop nutrients such as potash, phosphate, and nitrogen. Because every crop harvested removes nutrients from the soil, it's imperative to replace them with fertilizers. In fact, according to PotashCorp (NYSE:POT) fertilizers are responsible for more than 40% of the world's total crop yield. Add it all up and these long-term trends would seem to indicate very strong fundamentals for fertilizer producers like PotashCorp and Mosaic.

Final thoughts
The world's farmers have a tough task. They must do more with less, which is why the future appears to be especially bright for fertilizer producers. They offer one of the most palatable solutions for feeding a hungry world. That's why I think that planting a fertilizer stock in a portfolio and watching it grow over the long term would yield exceptional returns for any retirement portfolio.

Learn how to grow your portfolio