BlackRock's (NYSE:BLK) third-quarter results are in, and the proof is in the numbers: ETFs are wildly profitable for managers, despite their lower management fees.

Why ETFs still rock for asset managers
In the past few years we've seen a fee war erupt in the ETF marketplace. Charles Schwab (NYSE:SCHW)  is one of the main aggressors, having launched the Schwab US Broad Market ETF (NYSEMKT:SCHB) to track the total stock market at a microscopic annual expense ratio of 0.04% per year.

Despite being the cheapest way to buy the Total Stock Market Index, Schwab has managed to collect less than $2.4 billion in assets, proving that cost alone won't attract assets. It's about the total package.

BlackRock has that total package with its collection of well-known iShares ETFs. And while competition has forced BlackRock to cut fees on its "plain-vanilla" indexes, its other funds are still bringing in the money. At the end of the third quarter, the company reported that 23% of its $3.79 trillion in assets under management came from iShares.

Just how profitable is iShares? Very!
iShares generated some $727 million in quarterly fee income from roughly $872 billion in iShares ETF assets. That works out to an average of about 0.33% annually from its assets under management. Of course, some of its products dilute this number. BlackRock's iShares Core S&P 500 ETF (NYSEMKT:IVV) collects just 0.07% per year in fees because it's a plain-vanilla index.

However, its other "niche" offerings absolutely rock in fee generation. Its popular iShares Emerging Markets ETF (NYSEMKT:EEM) earns a stellar 0.68% of AUM in management fees annually. It's worth noting that Vanguard and Charles Schwab both have less expensive emerging-market ETFs, but neither has attracted nearly the same assets under management as BlackRock. Customers are much less fee sensitive in lesser-followed asset classes. 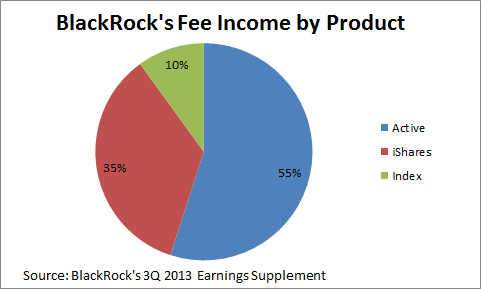 When you average the results out between what are basically its loss-leaders (simple index funds) and its niche strategy products (emerging markets, junk debt, etc.), its total fees from iShares are very compelling.

Fighting off competitors
Now more than ever, BlackRock is showing that it has the capacity to build a wide moat around what is, to some extent, a commodity business. BlackRock's fast-growing iShares business is central to its ability to grow going forward, with management proudly announcing that it is building out the largest sales team and new platforms to capture a greater percentage of market share on the conference call.

Robert S. Kapito, the company president, added: "Clients are now looking for a more holistic solution to their clients' portfolios, and they're looking for more asset allocation. And what they're requiring now is for us to build model portfolios that they could use our products in them or use other products in them."

The Foolish bottom line
Conveniently, successful ETF companies win in an all-or-nothing environment. The company that can build the longest track record, attract substantial assets under management, and do it first, generally has a lead that prohibits other companies from stealing share. Late entrants to the ETF space like Charles Schwab and Fidelity haven't seen their ETF businesses grow at nearly the same pace or to the same level of profitability as iShares.

At 16 times forward earnings expectations, BlackRock is an attractive value. The company turns virtually all (roughly 96%) of net income into free cash flow, which it distributes to shareholders via quarterly dividends and share repurchases. A combination of growing assets under management and shareholder-friendly capital allocation makes it worth another look.