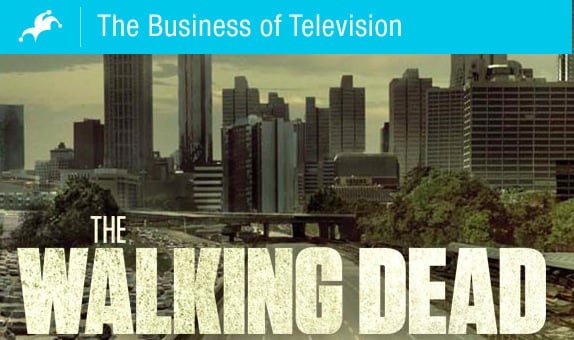 The Walking Dead season 4 premiered to 16.1 million viewers last week. That's huge. The ratings success of the show means the discussion is no longer whether The Walking Dead is cable's biggest show.

We're starting to look at whether Walking Dead is the biggest hit across all of television.

With The Walking Dead returning for episode 2 of season 4 tonight, let's look at its domination not only of cable TV, but how it's putting broadcast programs from FOX, CBS, ABC, and NBC to shame as well.

Last Sunday's cable ratings featured a lot of Walking Dead, and not much else. AMC Networks (NASDAQ:AMCX) ran a Walking Dead marathon across the day.

Source: TV By the Numbers

Wow. Let's put this in perspective. When Breaking Bad returned for the final half of its last season this August, the "premiere" episode brought in 5.9 million viewers and a 2.9 adults 18-49 rating. Those numbers were both huge jumps from previous seasons where Breaking Bad was averaging closer to 3 million viewers per episode.

Across last Sunday, the top four shows were all Walking Dead themed. What's also interesting is how much distance Breaking Bad put between itself and other well-reviewed television. Not pictured on the list are HBO's Boardwalk Empire and Showtime's Homeland. Both of those shows saw between 1.8 and 1.9 million viewers.

These two shows are on premium pay networks, which limits their audience, but viewership is also off from prior seasons. Both shows were seeing viewership in the 2.2 to 2.4 million range in episodes before their season finales last year.

Both HBO and Showtime are looking for more than initial ratings. They're watching for subsequent DVR viewings, On-Demand views, and viewership on their apps.

Yet, both Homeland and Boardwalk Empire are a good illustration that building ratings success of high-quality television shows across later seasons isn't a given. How Walking Dead -- and to a lesser extent Breaking Bad -- are growing their ratings in later seasons is simply incredible.

Looking at the broader television landscape, Walking Dead compares very favorably to broadcast television. The most popular current broadcast show in terms of viewership is CBS' The Big Bang Theory, which garnered 17.6 million viewers in its Oct. 10 episode.

The problem is that while The Big Bang Theory sees quite a bit of viewership, its overall 18-49 viewership was about 6.5 million viewers. That's very important, because advertisers are willing to pay far more for the 18-49 segment.

What's fascinating is that Walking Dead's premiere attracted 10.4 million viewers in the 18-49 segment. AMC's blog isn't bashful in boasting what a tremendous achievement that 18-49 rating was:

The season four premiere was watched by 16.1 million total viewers and 10.4 million adults aged 18-49. Last night's ratings confirm The Walking Dead continues to be the #1 show on all of television among the coveted 18-49 demographic. 2013/14 season to date, last night's premiere ranks as the #1 telecast in adults 18-49, outperforming all programs including primetime NFL football. With time-shifted playback, last night's premiere should exceed 20 million viewers."

Even with a smaller base of 18-49 viewers, Ad Age estimates The Big Bang Theory is able to bring in $323,000 per 30-second advertisement.

NBC's Sunday Night Football, which The Walking Dead looks set to go toe-to-toe with in 18-49 ratings across the season, commands $570,000 per 30-second spot.

With Walking Dead's ratings smashing every conceivable cable record, you'd have to imagine scatter market advertising is now approaching, if not beyond, the lofty heights of the NFL's marquee program.

How much bigger can this show get?

Can The Walking Dead keep up its torrid pace and possibly grow off its massive season premiere viewership? The short answer is, it's anybody's guess. The success The Walking Dead is seeing is uncharted.

98.9 million cable subscribers received AMC at the end of 2012, which is pretty strong penetration of American television households, so it's conceivable the show can continue growing with strong word of mouth.

The strongest indication we'll get is later tonight when episode 2 airs. If that episode sees a very strong hold from the premiere, buckle yourself in for a long year of The Walking Dead shattering cable records and entrenching itself as a cable phenomenon.