Everything you need to know about Facebook’s massive quarter.

Apple launches its brand-new iPad Air on Friday, but plenty of consumers are anxiously awaiting the arrival of the iPad Mini with Retina display. The smaller tablet might be hard to come by this holiday shopping season, but starting Friday The Motley Fool will be hosting a contest to win a free iPad Mini with Retina display! Make sure to check back on Friday to find out how you can win!

Facebook's (META -0.72%) third-quarter earnings are in, and the results were stellar. Shares initially reacted positively to the release and traded up more than 15% in after-hours trading before a negative comment about teen daily engagement erased those gains.

For the quarter, revenue rose 60% year over year to $2.02 billion, translating to adjusted earnings of $0.25 per share, which handily beat consensus estimates of $1.91 billion and $0.19 a share, respectively. Facebook ended the quarter with 1.19 billion monthly active users, or MAUs, representing an 18% increase year over year and a 3% sequential increase. 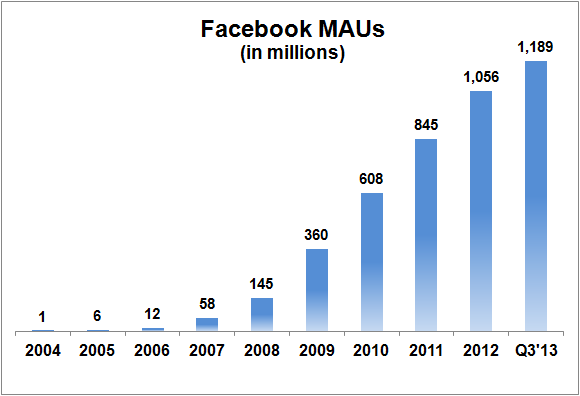 Engagement on the rise
Perhaps one of the most important metrics for an investor to follow is how engagement is faring at the world's largest social network. After all, Facebook's advertising business is highly dependent on the amount of time users spend on the site. A great way to measure this is by tracking the ratio of daily active users, or DAUs, to MAUs, to see if it is growing over time. This indicates effectiveness of Facebook's platform and whether it has been converting MAUs into more engaged DAUs. 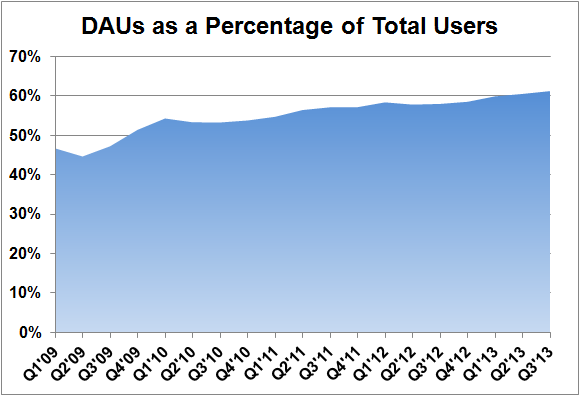 Monetization on the rise
The other piece of the engagement puzzle is how effectively Facebook has been monetizing its user base. By tracking average revenue per user, or ARPU, over time, investors can get a better sense of how monetization is faring. For the quarter, ARPU increased by more than 33% year over year and 7.5% from the previous quarter. In other words, Facebook's ARPU is trending in the right direction. 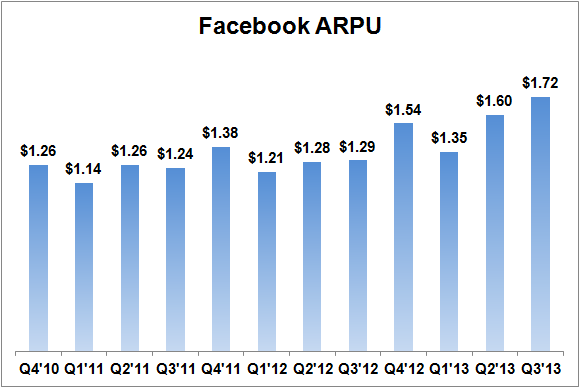 Cashing in on mobile
When Facebook first went public, investors were deeply concerned that the growing threat of mobile users would cannibalize its desktop-oriented advertising model, because at the time Facebook generated $0 in revenue from mobile. With a whopping 49% of Facebook's advertising revenue now generated from mobile devices, it's safe to say that the company has officially turned those skeptics into believers. What other company can take a seemingly massive threat and turn it into a massive opportunity in such a short time? Simply astounding. 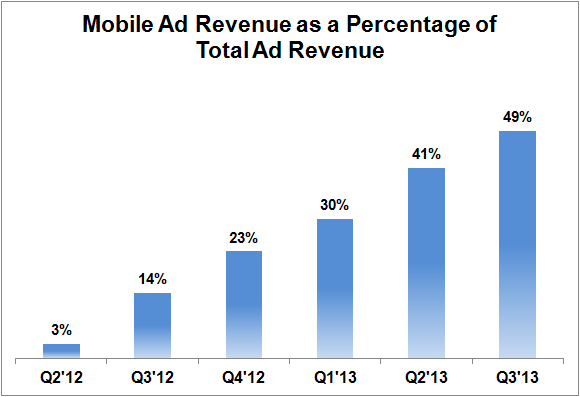 Room for improvement
Although 49% of Facebook's advertising revenue is generated from mobile devices, there could be room for improvement. Facebook ended the quarter with 74% of its total user base being mobile MAUs, indicating that there's likely still untapped potential in terms of mobile user monetization.

Sound the alarms!
During the earnings conference call on Thursday, CFO David Ebersman told investors that the company saw a decrease in daily users among younger teens, which completely killed investors' moods. While Ebersman did note that Facebook remains nearly fully saturated among U.S. teens and overall sequential usage among teens was stable, this comment helped ruin an otherwise great earnings report.

Investors might also be concerned that the company doesn't plan to increase the frequency of ads in the News Feed, despite it being a key driver of revenue growth in 2013. Investors banking on another great year of News Feed-driven revenue growth should temper their expectations. However, I remain confident Facebook will find other compelling ways to drive revenue growth next year, given its track record of turning the "threat" of mobile into a massive opportunity.

This journey is 2% complete
Although it's tempting to get caught up in the earnings frenzy, investors should remember that a quarter of results is just a small blip of a company's long-term existence. Above everything else, Facebook's primary goal is to make the world more open and connected. With only 1.19 billion so far taking part in this journey, Facebook has a lot of work to do to get the next 5 billion users online.

At the end of the day, Facebook reported stellar earnings, total engagement has been rising, and it has been more effectively monetizing its user base. I'm confident the company will work through these potential issues, and I'm looking forward to more monstrous quarters. If you're a long-term investor, Mr. Market may be giving you a rare opportunity to buy an A-class organization with a noble purpose.