Investors love stocks that consistently beat the Street without getting ahead of their fundamentals and risking a meltdown. The best stocks offer sustainable market-beating gains, with robust and improving financial metrics that support strong price growth. Does Herbalife (NYSE:HLF) fit the bill? Let's take a look at what its recent results tell us about its potential for future gains.

What we're looking for
The graphs you're about to see tell Herbalife's story, and we'll be grading the quality of that story in several ways:

What the numbers tell you
Now, let's take a look at Herbalife's key statistics: 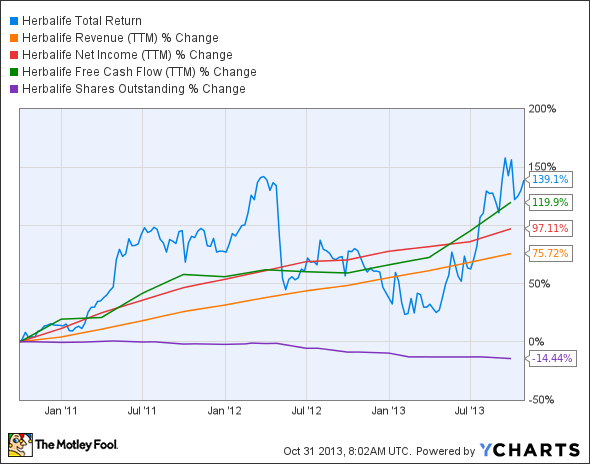 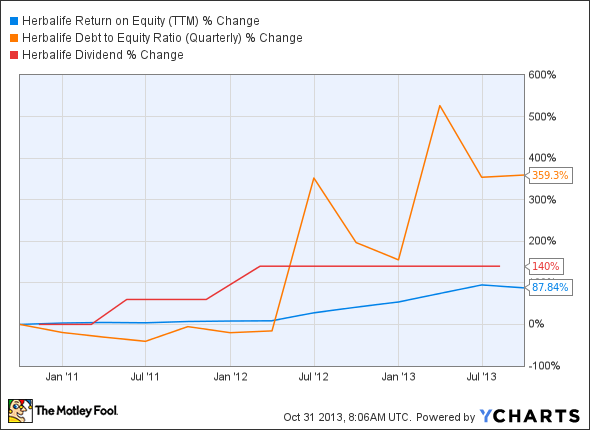 How we got here and where we're going
Herbalife puts together an impressive performance, earning eight out of nine possible passing grades in its second assessment, an improvement of two passing grades since our analysis last year. The company continues to raise significant debts to conduct a large share repurchase, which again costs it a failing grade, and in this case stands between a great performance and a perfect one. Can Herbalife keep improving without adding new debt burdens next year?

Herbalife has been at the center of a major investing battle this past year between Bill Ackman of Pershing Square and Carl Icahn. Ackman memorably called Herbalife's multilevel marketing business a pyramid scheme, which gained some credence when former Herbalife distributor Dana Bostick filed a legal suit against Herbalife on similar grounds. Federal Judge Beverly O'Connell has ruled that Herbalife's marketing business can be considered a pyramid scheme if the company fails the provisions of the "Koscot test," which should be determined during the course of the suit. Fool contributor Rich Duprey notes that Ackman has covered more than 40% of his short position in Herbalife to avoid losses, which seems to indicate a loss of confidence in the possibility that the Federal Trade Commission, or other government regulators, might shut down its business -- or even that the company's network of "distributors" will decide to cease purchases.

Superinvestor Carl Icahn, who holds a long position of more than 14 million shares, has been ready to defend the company against Ponzi perceptions, and he's undoubtedly been one of the reasons behind the stock's year-to-date double. Legendary investor George Soros also added a bullish voice to the conversation, as he bought a stake in Herbalife over the summer. Hedge-fund investor Dan Loeb also took a large stake in the company. The battle has thus far been arrayed in strength against Ackman, and the numbers appear to support the anti-Ackman crew. In its latest quarter, the company added record 80,000 new distributors, which pushed revenue and profit 18% and 28% higher year-over-year, respectively. However, Icahn believes that Herbalife will need to generate large amounts of profit to limit possible trouble, since 75% of its assets are liabilities and debt.

In an effort to heighten its public exposure, Herbalife has strengthened its existing relationship with AEG Worldwide by sponsoring the shirts of the LA Galaxy major-league soccer team. Fool contributor Dan Caplinger notes that the new deal also gives Herbalife branding opportunities with Sweden's Hammarby team. Herbalife's rival Weight Watchers, which also offers specialized weight management products, has been less successful in its marketing efforts, but is a cheaper stock at the moment, and comes with none of the pyramid-scheme stigma that clings to Herbalife.

Putting the pieces together
Today, Herbalife has many of the qualities that make up a great stock, but no stock is truly perfect. Digging deeper can help you uncover the answers you need to make a great buy -- or to stay away from a stock that's going nowhere.