Two of the Dow Jones Industrial Average's (DJINDICES:^DJI) biggest components have become two of the biggest laggards so far in 2013. ExxonMobil (NYSE:XOM) and Chevron (NYSE:CVX) are dominant players in oil and have been great investments for a long time but this year they're being overshadowed by smaller renewable energy companies that are beginning to take share in the energy industry.

Recent earnings from ExxonMobil and Chevron show the challenges they're facing. Yesterday, ExxonMobil said revenue fell 2.4% in the third quarter and net income was down 21.6%, primarily on lower refining earnings. A similar trend played out today for Chevron, which reported that revenue was up just 0.8% to $58.5 billion and net income was down 5.8% to $4.95 billion, or $2.57 per share. As a result, Chevron is the worst performer on the Dow Jones Industrial Average today, falling 1.9%, and you can see that performance has been weak for both stocks this year.

In contrast, both First Solar (NASDAQ:FSLR) and SunPower (NASDAQ:SPWR) have reported earnings in the past two days that have crushed everyone's expectations. First Solar earned $1.94 per share, demolishing the $1.18 estimate, and SunPower's $0.44 in earnings was well above the $0.29 estimate from Wall Street.

As renewable energy companies have grown and improved profits, their stocks have outperformed big oil by a wide margin, as you can see below. 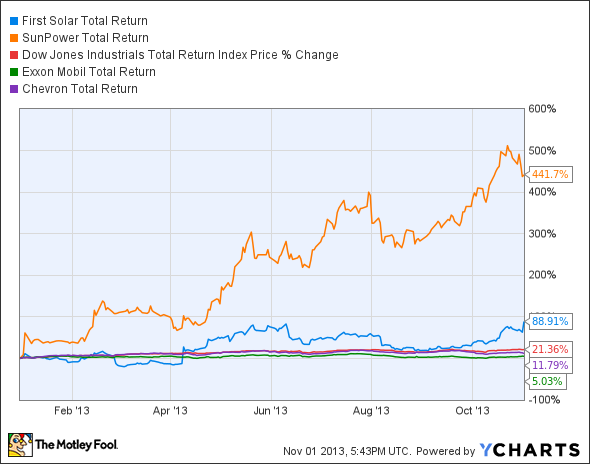 Long term, the trends continue to be in the favor of renewable energy and against big oil. Solar projects in Chile, Hawaii, Germany, and elsewhere are competitive with the grid without subsidy, and costs are only coming down. New markets like Saudi Arabia, Africa, and China are just scratching the surface of their potential.

On the flip side, oil is becoming harder to find, forcing explorers to look in ultra-deepwater and shale deposits around the world. This increases the cost for oil, and as demand for gasoline has dropped in the U.S. and Europe there's become less appetite for passing those costs on through higher gas prices. Not only is big oil's top line not growing, it's getting pressure on the bottom line as well.

Big oil isn't going away overnight, but it may be time to start considering a little renewable energy exposure for your portfolio. Energy trends are certainly tilting in their favor.