"The Dow Jones (DJINDICES:^DJI) could use some of Google's (NASDAQ:GOOGL) secular growth," said Alex Dumortier in a recent Fool article.

Investors with a spiritual bent might wonder what's up with all this "secular" talk. One popular definition of the word boils down to worldly, not related to religion. Generally speaking, rock 'n' roll is secular music and gospel is not. You know what I'm saying. And nobody ever said that investing was a religious experience, right? Shouldn't all growth, every bull and bear market, really be "secular" in nature? The opposite doesn't even make sense.

Yeah, but that's not the only definition of the word "secular," and not the right one in this context. Secular also means "existing or continuing through ages or centuries," or in the more economics-related sense, "of or relating to a long term of indefinite duration."

It helps to be Swedish, where "sekel" means "century." So you can think "century-like" when you hear "secular." In other words, a very long term. Here's how the word made it into English: 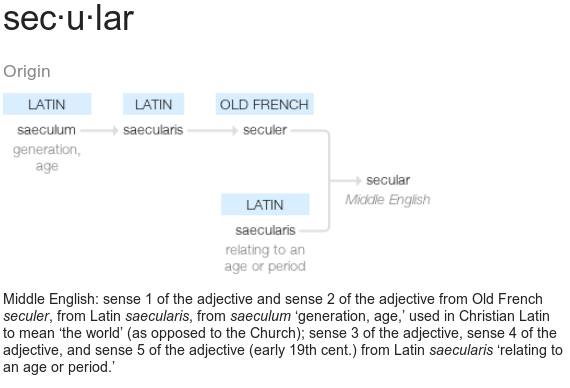 So Alex isn't hoping for Google's worldly rock 'n' roll success to rub off on the Dow Jones. He sees extreme long-term growth in Google's business model (and I think he's absolutely right), which would make it a great fit for the long-term focus of the Dow.

Hoexter noticed strong intermodal business improvements, paving the way for another long-term growth story. Short-term cost control troubles don't seem to matter in the light of the larger, secular story. Ignore the temporary noise and focus on the long-term fundamentals -- what a wonderfully Foolish sentiment.

The secular bull and bear market arguments seem to hinge on exactly what you mean by "secular." Remember the "indefinite duration" part of the duration and you'll see that secularity is open to interpretation.

The Dow has hardly moved at all in the last five months, which makes it look like a secular bear market with a "secular" definition on a "several months" kind of scale. But the Dow Jones has gained 17.6% over the last year, 67% in five years, and 2,100% in my 38-year lifetime. It's been a bumpy ride, but the general direction is relentlessly positive. Stretching your definition of "secular" tends to make the resulting secular market look more bullish.

And that's why Foolish investors love secular growth. I don't know J.B. Hunt well enough to judge its true secular growth prospects, but Google is set up to become one of those stocks you buy once, then pass down to your grandkids 50 years later.

"Secular" is a beautiful word once you figure out what it really means.