That's a big drop. And Americans spend enough on gas that it means a real savings.

Sure, prices can (and will) rise again. A lot of the current drop is likely seasonal. But gas prices have been remarkably stable year to year lately. Check out the average weekly price since 2011:

Keep in mind, average weekly earnings during were $650 in 2011 and $682 today, so real gas prices are close to 5% lower this year than they were two years ago. That adds up. The general rule of thumb is that every one-cent increase in gas prices takes $1 billion out of consumers' pockets. Three years of flat (or declining) gas prices is the equivalent of a small stimulus package.

Thank tame oil prices for this. A barrel of oil costs the same amount today as it did 2.5 years ago, and more than 40% less than it did five years ago. Oil prices haven't really gone anywhere since the recession began in late 2007: 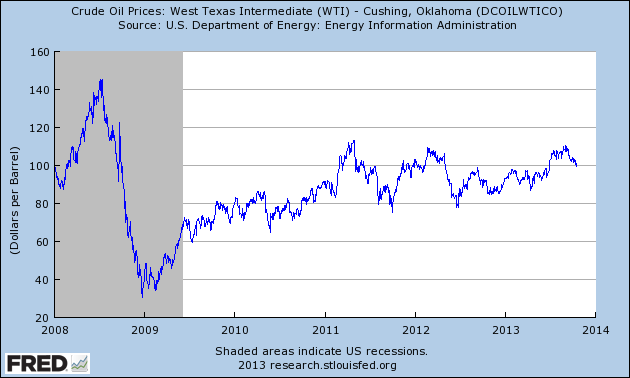 What's incredible about this is that we've had a ton of geopolitical chaos in the last five years. The Arab Spring. Conflicts in Syria, Iran, Libya, and Nigeria. A few years ago, these events would wreak havoc on the price of oil. But they haven't lately. I think the best explanation for this is that America's oil boom has offered enough supply to world oil markets to offset a big portion of geopolitical tension.

Combine gas prices with other energy products like heating oil and propane, and Americans are now devoting less of their spending to energy than they have for most of the last half-century: 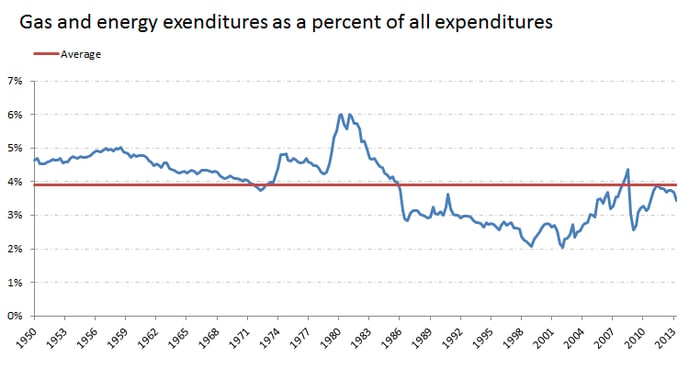 This line is about about half a percentage point below the long-term average. That small gap equates to about $57 billion per year.

Things move in cycles. For most of the last 15 years, energy prices moved relentlessly higher. Combine an energy boom with an efficiency push among car manufacturers and industrial plants, and there is good reason to believe we are at a turning point to begin a new trend toward lower, more stable energy prices. That's good news for everyone.