Whether you like it or not, Tesla Motors (NASDAQ:TSLA) is building out the charging infrastructure to support mass-market adoption of its electric vehicles.

It begins with a 1,750-mile road trip
This Wednesday Tesla embarked on a journey from San Diego to Vancouver in two Model S sedans, powered only by Tesla Superchargers. According to Tesla's Oct. 30 press release, the drive marks the completion of supercharging the West Coast corridor that allows Model S owners to travel for free (assuming they opted to pay up front to enable the service) "between San Diego, California and Vancouver, British Columbia."

With stations along U.S. Highway 101 and Interstate 5, the West Coast's key routes, cities and destinations are connected by Tesla Superchargers. Model S customers can drive between San Diego, Los Angeles, Santa Barbara, San Francisco, Sacramento, Portland, Seattle, and Vancouver for free with minimal stops. More than 99 percent of Californians and 87 percent of Oregon and Washington owners are now within 200 miles of a Supercharger.

Tesla's expansion has seemingly taken place overnight. At the beginning of this year, Superchargers were a rare commodity -- even on the West Coast. And based on Tesla's plans, the rapid expansion won't be slowing down any time soon. According to a Tweet from Tesla CEO Elon Musk on Wednesday, the "East Coast Supercharger network should be complete in a few months." It will take Model S owners from Miami to Montreal, he told his followers on Twitter. 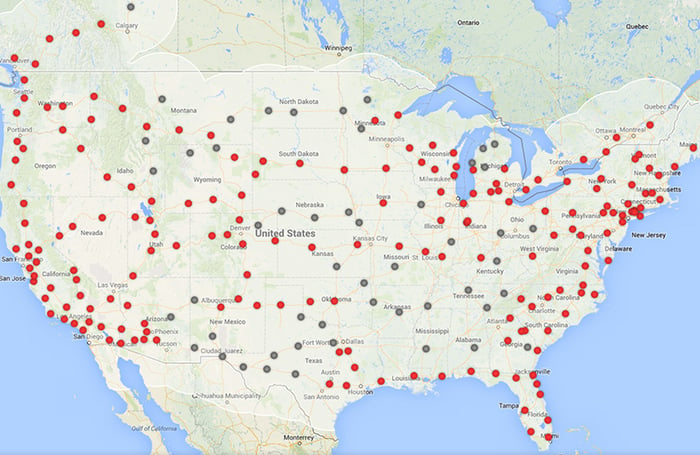 Of course the plans expand beyond the U.S., too. Already completing its network in Norway, Tesla plans to provide coverage for 100% of the population of Germany, Netherlands, Switzerland, Belgium, Austria, Denmark, and Luxembourg by the end of 2014. Plus it expects to build out its charging infrastructure for 90% of the population of England, Wales, and Sweden within the same time frame.

Laying the foundation for Tesla's affordable electric car?
While the infrastructure will certainly make long-distance travel for its Model S owners far easier, the aggressiveness of the expansion is likely an effort to lay down the charging network to drive sales of its more affordable car, commonly referred to as the Gen III. Tesla has said the more affordable car, to be priced at about $35,000, could launch as early as 2016.

Meanwhile, there's no stopping Tesla from taking a 1,750 mile road trip. Expect another road trip on the East Coast in a few months.
This article represents the opinion of the writer, who may disagree with the “official” recommendation position of a Motley Fool premium advisory service. We’re motley! Questioning an investing thesis -- even one of our own -- helps us all think critically about investing and make decisions that help us become smarter, happier, and richer.