LinkedIn (NYSE:LNKD.DL) is growing at more than two members per second. The company operates one of the best-monetized social networks in the world. An optimal mix of a premium subscription model, advertising, and human resources services has allowed the company to beat earnings expectations every quarter. However, although LinkedIn's profitability remains strong, it may be facing a revenue growth problem. The company provided lower-than-expected revenue guidance on the latest earnings call, causing shares to slump 3.3%.

The company's management cited faster-than-anticipated growth in past quarters and saturation among white-collar workers as some of the reasons for the current growth slowdown. Meanwhile, social network companies with fewer revenue sources than LinkedIn, such as ad-based Facebook (NASDAQ:FB) or SINA (NASDAQ:SINA), continue to experience revenue growth acceleration. How can LinkedIn improve its top-line performance? 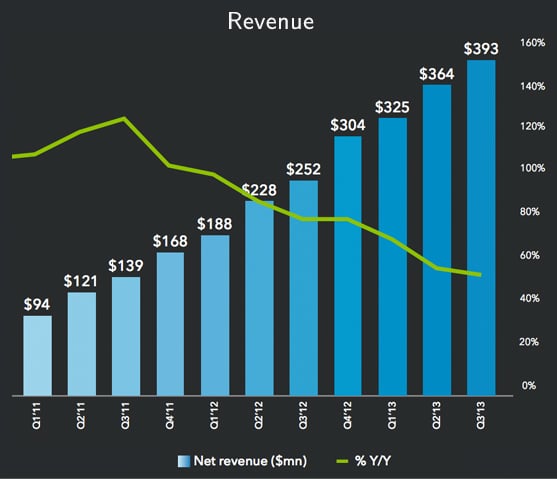 LinkedIn's growth problem is unique
LinkedIn is not dealing with weak top-line performance. The company recently announced better-than-expected third quarter revenue of $393 million, which represents a 56% increase from a year ago. However, investors should also pay careful attention to LinkedIn's nosebleed valuation. The company is trading at nearly 160 times forward earnings, well above Facebook's 70 times.

When analyzing LinkedIn's earnings calls, investors should determine if current figures and future official projections are high enough to justify the current market valuation or not. In some cases, future guidance may be more important than current top line performance. This is why, when LinkedIn announced it expected between $415 million-$420 million for the final three months -- $18 million below the consensus -- investors were disappointed. Conservative forecasts are not an option for a company valued at 160 times forward earnings.

Understanding LinkedIn's limitations
In order to keep beating the street consensus by a wide margin, LinkedIn needs to be in constant search of alternative revenue sources, maximize the engagement of its users, and pursue an aggressive user acquisition strategy.

In order to maximize engagement, it is important to understand that many users register LinkedIn accounts because they are given the opportunity to keep their resumes online and build professional networks for free. However, most users do not carry out their professional activities on LinkedIn. Instead, they choose other specialized websites. For example, software engineers use github.com and stackoverflow.com to upload code samples or create a reputation, financial professionals do the same in sumzero.com, while researchers use academia.edu to share research.

If LinkedIn wants to keep growing at amazing speeds, it must become more than an online place resume storage place. LinkedIn needs to become a hub for every kind of online professional activity.

Permanent search for new revenue sources
To find additional revenue sources, LinkedIn should be more active about acquisitions. It should also release new complementary services and take advantage of network effects to strengthen its overall business.

SINA is a great example of a company that is constantly reinventing itself in order to find new and unexplored revenue sources. SINA started as a multiple-service news portal. Later, it released a blog service, games, and entertainment channels. More importantly, in 2009, the company launched microblogging website Weibo, a hybrid of Twitter and Facebook, which has become one the most popular sites in China. With $30 million in ad revenue during the second quarter of 2013, Weibo has been valued at $6 billion.

Acquiring new users
Although LinkedIn is growing at more than two users per second, the company's user base is still very small compared to Facebook's 1.1 billion profiles. Furthermore, some competitors, like Viadeo, seem to have more users than LinkedIn in emerging economies.

Final Foolish takeaway
LinkedIn's high valuation practically forces the company to beat the Street consensus by a wide margin every quarter. This is a challenging task for a social network with more than 250 million users, but not impossible. Improving user engagement and providing opportunities for members to carry out their online professional activities within the network could help stop the current revenue growth slowdown.