Investors adjusted to a less-dovish-than-expected policy statement from the Federal Reserve's October policy meeting on Wednesday; on the week, the S&P 500 was up just 0.1%, while the narrower, price-weighted Dow Jones Industrial Average (DJINDICES:^DJI) gained 0.3%. However, three large-cap technology stocks, Facebook (NASDAQ:FB), LinkedIn (NYSE:LNKD) and Hewlett-Packard (NYSE:HPQ) made big moves this week (the green line represents the S&P 500): 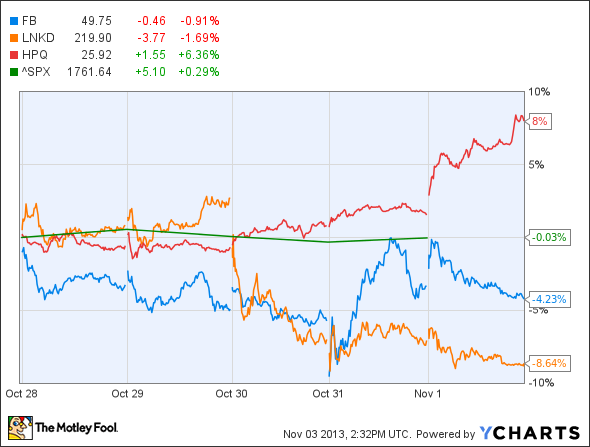 Social-networking giant Facebook reported its results for the third quarter after the market close on Wednesday, and the numbers were worthy of a growth company. Quarterly revenue rose 60% year on year to $2.02 billion, with mobile ad revenues displaying the strongest growth, raising mobile's contribution to total ad revenues to nearly half (49%). Excluding items, Facebook's earnings per share were $0.25, handily surpassing analysts' $0.19 estimate.

Those results sent the stock soaring as much as 15% in the after-hours session until CFO David Ebersman mentioned that the company had seen a drop in use by younger teens (use across all teens is stable). That caused the stock to give up all of those gains and then some, but that pullback looks like an overreaction (much as the initial pop may have been -- the stock was up 2.4% the next day). Ebersman specified that the observation on younger teens' use may not be statistically significant, and the fact remains that Facebook has achieved near total market penetration with teenagers. Finally, there are no signs of any teen exodus from the social network.

Why, then, the volatile stock market reaction? I think it's an indication that the stock's valuation is stretched. At 49 times the next 12 months' earnings-per-share estimate, the implied long-term growth assumptions are substantial, and anything that appears to threaten them make investors very jumpy. Buyer beware!

A stratospheric valuation may also have dogged LinkedIn this week; its price-to-forward earnings multiple of 112 makes Facebook look like a utility by comparison. The professional social-networking company reported its third-quarter results after Tuesday's market close, and the stock fell 9.3% the next day.

In absolute terms, LinkedIn put up numbers that would have most companies (and their investors) salivating: Ex-items, the company earned $0.39 per share, a 77% over the prior year's quarter and well ahead of analysts' $0.32 forecast. Revenues also grew smartly, up 56% to $393 million.

Here's the rub: The market, ever forward-looking, is never satisfied with past accomplishments. The revenue guidance range LinkedIn provided for the current quarter of $415 million to $420 million did not impress Wall Street, which had been counting on $438 million. LinkedIn is a stellar business, but, as with Facebook, the stocks' valuation leaves it vulnerable to substantial volatility as investors recalibrate their growth assumptions -- and that's exactly what happened this week.

While Facebook and LinkedIn had a tough week, Hewlett-Packard ended the week on a high note, with the shares gaining more than 6% on Friday. The rise was sparked by news that the Government Accountability Office has upheld a five-year, $3.5 billion contract the U.S. Navy awarded Hewlett-Packard in June to manage its communications network. Harris was challenging the agreement.

The stock market's reaction to the news looks a little overenthusiastic, as it added roughly $3 billion to Hewlett-Packard's market value. That's not far off the contract value -- which isn't pure profit! This may be another example of the dramatic reversal in sentiment that has helped H-P's shares to a spectacular 73% return year to date.