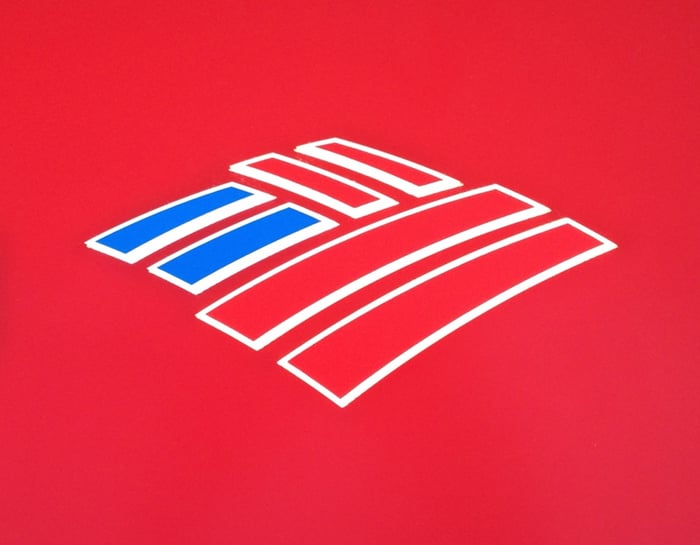 At the bottom of every Motley Fool article, you'll see a disclosure that reads: "We Fools don't all hold the same opinions, but we all believe that considering a diverse range of insights makes us better investors." We take that diversity of opinion very seriously -- even when it comes to Bank of America (NYSE:BAC). And today, I'm going to provide a counterpoint to my Foolish colleagues' article "Bank of America: Inside America's Most-Hated Bank."

While we're on the subject of disclosures, you'll also notice at the bottom of this article that I own shares of Bank of America. I'm also a customer at Bank of America. Bank of America offered me my first job out of college, and I worked in its corporate headquarters. I'm thankful for the returns on my stock investment, the service that I get as a customer, and the previous career opportunity.

You may understandably think that my opinion on Bank of America is clouded by all these things. However, it's also important to note that I left my job at the bank after a year and a half to pursue another opportunity, that I use other banks for other financial services, and that to keep Bank of America's stock in my portfolio, I demand the same from it that I do from any other company I own. So although my ties to Bank of America certainly shape my opinion about the bank, they do not dictate it.

Not a doomed bank
The authors of the aforementioned Fool article make their view on the bank and its stock perfectly clear:

We've recently taken a closer look at the bank, and now believe Bank of America's current business model is unsustainable. As a result, we find it hard to believe its stock will outperform the market over the long term.

Their conclusion that Bank of America is a poor investment stems from the bank's uniquely awful reputation, its reliance on profits from customers whom it's unable to adequately serve, and the belief that it faces deeper challenges as a result of poor corporate culture rooted within its walls.

I believe all three of those points are misguided and cast the bank in an unfair light. In fact, as it relates to those three points, I would argue you can take all three reasons, look at them another way, and find reasons that you should invest in Bank of America.

You can't refute the reality that Bank of America has a poor reputation. But even though it trailed competitors Citigroup (NYSE:C) and JPMorgan Chase by a wide margin in these rankings, there was marked improvement over the past year.

Of these four banks, Wells Fargo had the highest rating among non-customers at 50.6, but it also lost reputational clout in the eyes of its customers when compared with 2011. Although Bank of America's reputation is largely flat over this time period, the 20% jump between 2012 and 2013 shows it's been making significant progress.

The article from my Foolish colleagues concluded that Bank of America's lagging reputation was a cause for concern, but they neglected to mention this commendable recent improvement.

Certainly, Bank of America has plenty of room for continued improvement on the reputational front, but a 20% improvement over the past year is a great start.

Bank of America does have an expansive consumer business, as the article from my colleagues notes and focuses on, but it's certainly not the only business the bank relies on for income. Based on the most recent earnings announcements from the big U.S. banks, the net income for each bank's core businesses over the first nine months of the year breaks down as follows: 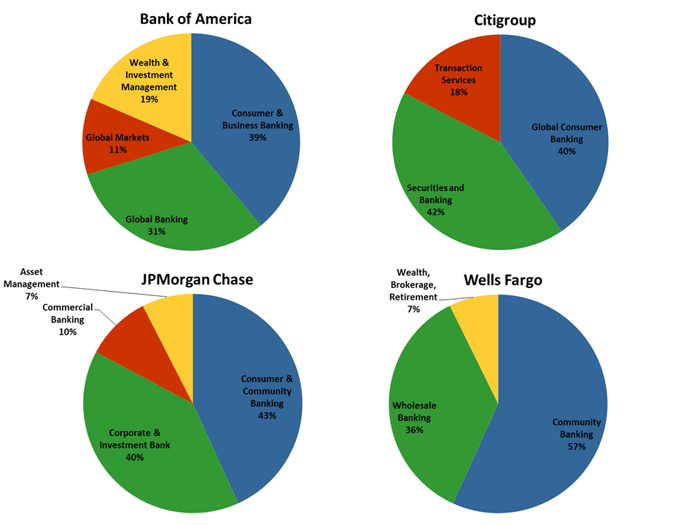 Bank of America has a diverse stream of income, and it also has the lowest percentage of income attributable to its consumer-banking operations. Meanwhile, its corporate and investment bank has a relationship with 99% of U.S. Fortune 500 companies.

It's also true, as my colleagues contend, that banks make money off fees, and that there's no quantifiable way to gauge what's hidden and what isn't. However, Bank of America has a link on its website that displays exactly what fees there are. So do Wells Fargo and JPMorgan Chase. I would absolutely agree Bank of America and many other banks have gone too far in the past as it relates to their fee policies and practices, yet they're all seemingly doing their best to become more transparent.

After the 2011 $5 debit-fee fiasco, Bank of America issued an 82-word statement recanting its decision. In it, David Darnell, co-chief operating officer, stated simply:

We have listened to our customers very closely over the last few weeks and recognize their concern with our proposed debit usage fee. Our customers' voices are most important to us. As a result, we are not currently charging the fee and will not be moving forward with any additional plans to do so.

The bank's customers complained, and the company listened. Since when has that been a problem?

Banks also make money off fees in customer transactions -- but those are charged to the merchants, not the customers. That certainly affects the businesses charged, but consider the infrastructure, technology, and people needed to ensure that the money correctly goes where it should. That's no small task: Bank of America has seen $350 billion worth of transactions made on its credit and debit cards in 2013 alone.

MasterCard, Visa, American Express, and even financial startup Square all make a significant amount of money from fees charged in transactions between customers and merchants -- yet very few consider those companies to be evil.

Lower expenses = more profits for shareholders
As for managing expenses, Bank of America has been forthcoming in its desire to cut expenses in the name of profitability and efficiency. The result has been a visible branch-closing campaign, but the bank's greater emphasis on mobile and online banking is meeting customers' changing needs.

PricewaterhouseCoopers' 2013 U.S. Retail Banking Trends report considered the "third core attribute" of customer experience to be "convenience -- anytime, anywhere access." That attribute ranked behind only product quality and support. Not that Bank of America will ignore these aspects: As the bank focuses more on better serving its customers in more cost-effective ways, it can better employ its resources to boost product quality and support.

But it'll take more than a shift from asset-lite online and mobile banking to get Bank of America's expenses to where they need to be. Every bank reports an efficiency ratio that measures expenses as a percentage of revenue. It's an important way to see how much it costs the banks to generate each dollar of revenue. As a result of its numerous legal woes, Bank of America has lagged its three major peers in expense management over the past three years. But Bank of America has begun to right the ship in 2013, and its expense ratio is finally moving in the right direction -- down -- and narrowing the separation between it and its peers. 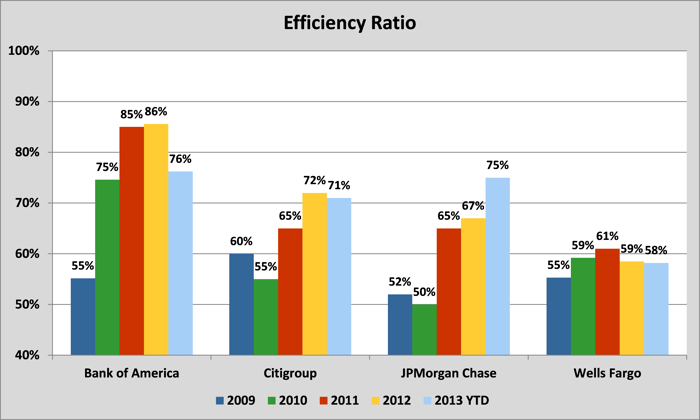 Bank of America acquired Countrywide Financial and Merrill Lynch in the depths of the financial crisis for roughly $25 billion. With acquisitions of that magnitude, there will almost undoubtedly be operational overlap and duplication. It's been five years since these deals were announced, and Bank of America is continuing to integrate these acquisitions and work toward making them more efficient -- a process that will benefit both clients and shareholders.

To recap, Bank of America's diverse revenue streams are continuing to deliver results even as the company puts its mortgage-related issues behind it. The bank is becoming more transparent and open to customer feedback, and as it works toward becoming a more efficient operation, profits should drop to the bottom line.

Bank of America's industry and culture
Very few people can speak to the specifics of the culture inside the boardrooms of Bank of America. However, thanks to a variety of sources, we can determine at least what employees think of the company. Independent employee-rating site Glassdoor recently provided me with the approval ratings for CEO Brian Moynihan and Bank of America. Take a look.

Obviously, it hasn't been all blue skies and sunny days for Bank of America or Moynihan since the passing of the Dodd-Frank act in June 2010. But as the legal woes have abated and the performance has improved since passing the Federal Reserve-run stress tests earlier this year, the perspective of the employees has improved a bit as well.

Although it's hard to narrow Bank of America's culture down to a few words on a page (or screen), the data suggests that Bank of America is seeing improvement there as well.

But it also goes beyond just Bank of America. Particularly after the financial crisis, the banking industry began to become the subject of many complaints. Yet at its core, banking provides a pivotal service to customers and clients.

It safely holds its depositors' money and aggregates it so those seeking capital -- whether it be for homes, cars, businesses, or anything else -- are able to access it. Disruption may come from a number of different directions, but the industry is likely to continue in its current capacity for years to come.

Speaking about Brian Moynihan on CNBC, billionaire Warren Buffett -- who has made more than $5.3 billion from his $5 billion investment in Bank of America -- recently noted: "[Y]ou knew he was going to make more progress. He went back to the basics of a wonderful business ... to be the envy of every banker in the world." (Emphasis added.)

I can't say what the future will hold, but I trust the wisdom of Warren Buffett and his opinion of Bank of America and the broader banking industry. Bank of America has begun a turnaround and is poised to continue that turnaround into the future. As the operating business improves, I think its stock will outperform as well.