Please ensure Javascript is enabled for purposes of website accessibility
Log In Help Join The Motley Fool
Free Article Join Over 1 Million Premium Members And Get More In-Depth Stock Guidance and Research
By Adam Levine-Weinberg - Nov 4, 2013 at 11:36AM

Embraer shares have plunged recently due to weaker than expected sales of its commercial jets. However, a turnaround is in sight.

Shares of Brazilian aircraft manufacturer Embraer (ERJ -4.33%) have had an up and down 2013. While the year began with renewed optimism for Embraer's signature "E-Jets" line of aircraft, Embraer stock has fallen over the past several months due to poor sales numbers. 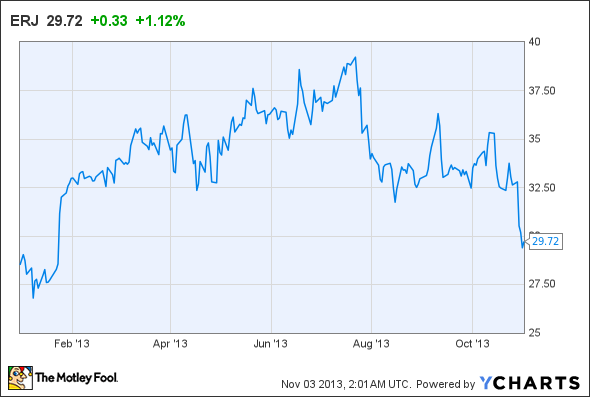 However, Embraer's recent struggles may have created a good buying opportunity for long-term investors. The company's order backlog has grown considerably over the last year, and strong demand for large regional jets in the U.S. should keep production lines going for the next few years.

Embraer's second-generation E-Jets will arrive near the end of the decade. These will offer much better performance and as a result they are likely to sell well. This provides a source of long-term growth for Embraer.

Demand woes
While Boeing (BA -3.42%) and Airbus have soared on strong demand for new, fuel-efficient planes, Embraer has had a harder time selling airplanes. Today, Embraer focuses primarily on the market for 50- to 100-seat jets. Unfortunately, airline preferences have been shifting toward larger aircraft.

Embraer's fortunes appeared to stabilize earlier this year as it received several new orders to rebuild its backlog. However, the company may have trouble meeting its 2013 guidance, as it planned to deliver 90-95 commercial aircraft this year, but only delivered 58 through the end of September. Embraer received another blow last week, when JetBlue (JBLU -3.68%) announced that it was deferring 24 Embraer E-190 orders until 2020 and thereafter.

The American opportunity
In the early years of production, Embraer's larger E-Jet variants (the E-190 and E-195) were the biggest sellers. However, the smaller E-175 aircraft constitutes the majority of Embraer's backlog today. This is largely the result of an industry-wide shift within the U.S. away from small regional jets (those with 50 or fewer seats) and toward jets with 70-80 seats, such as the E-175.

The Embraer E-175 is a popular choice for U.S. regional carriers (Photo: Embraer)

United ordered 30 E-175 aircraft directly from Embraer earlier this year, while its regional partner SkyWest (SKYW -4.81%) ordered another 40. Meanwhile, Republic Airways (NASDAQ: RJET) ordered 47 E-175 aircraft, which it will operate for AMR.  Republic took delivery of the first 9 E-175s last quarter. All of the aircraft destined for United and AMR's regional operations will be delivered within the next two years.

The most likely source of new regional flying contracts is AMR. So far, it only has firm plans to grow its large regional jet fleet from 47 to 94, but its new labor contract allows it to potentially utilize more than 300 large regional jets. AMR's ongoing merger process is probably the only thing slowing the process of adding these 76-seat jets.

Improving outlook
Embraer has 108 firm orders left on its books for the United and American regional fleets, which constitutes about half of its firm backlog for the current generation of E-Jets. These orders alone will fill half of Embraer's delivery slots through the end of 2015 at the current production pace. If the company can win another round of regional jet orders -- most likely at AMR -- it will be in good shape for a few years beyond that.

By 2018, the next-generation E-Jets will start to arrive. Embraer's forecasts show that there will be demand for 6,400 jets in the 70- to 130-seat range over the next 20 years. The E-Jets E2 program is designed to help Embraer win a larger share of that market by using new engines, a redesigned wing, and other enhancements to reduce fuel and maintenance costs. The E-195 jet is also growing by three rows, allowing Embraer to address a larger market.

The second-generation E-Jets will enter service between 2018 and 2020 (Photo: Embraer)

Altogether, Embraer promises an airplane with unit costs similar to the next-generation Boeing and Airbus narrowbodies, but right-sized for smaller markets. Embraer already has 150 firm orders and another 215 units covered by options, purchase rights, or letters of intent. In fact, Embraer's commercial aviation backlog has doubled in the last nine months due to demand for these next-generation planes and the recent orders for regional aircraft from the U.S. market.

A solid growth play
Strong demand for regional jets in North America is bolstering Embraer's backlog, ensuring that production of the current-generation E-Jets can continue at the recent 8/month pace. However, the coming of the E-2 jets later this decade provides a real growth opportunity for the company.

The significantly better unit costs and market coverage of the E-Jets E-2 family will allow Embraer to capture a bigger slice of the overall commercial jet market. This will boost sales and help Embraer better leverage its fixed costs, leading to much higher profits down the road.

Adam Levine-Weinberg is short shares of United Continental Holdings. The Motley Fool recommends Embraer-Empresa Brasileira. Try any of our Foolish newsletter services free for 30 days. We Fools may not all hold the same opinions, but we all believe that considering a diverse range of insights makes us better investors. The Motley Fool has a disclosure policy.