The single-serve coffee market was revolutionized with the advent of the Keurig K-Cup brewer from Green Mountain Coffee Roasters (NASDAQ:GMCR). This market grew at a compound annual growth rate of 75% between 2007 and 2012. Looking ahead, it is estimated that single-cup-coffee sales in the U.S. will reach an estimated value of $5 billion by 2016 . 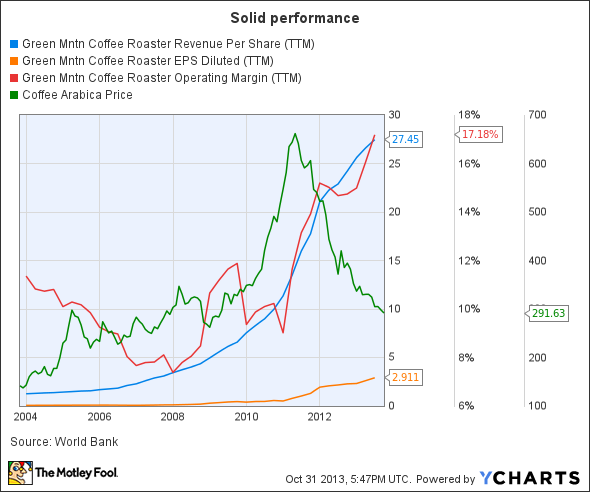 Helped by lower coffee prices
One reason why this momentum would continue going forward is the decline in coffee prices (shown in cents/kg in the chart above), a trend that has been seen for around two years now. We see a sharp increase in revenue per share and EPS as coffee prices declined. 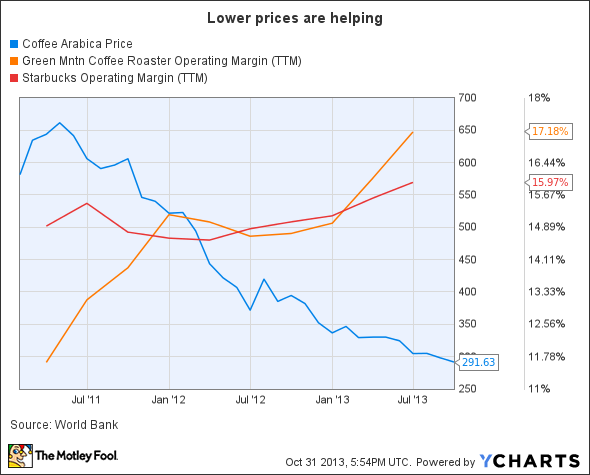 This is probably because Starbucks is a far more labor-intensive operation than Green Mountain, leading to higher expenses. 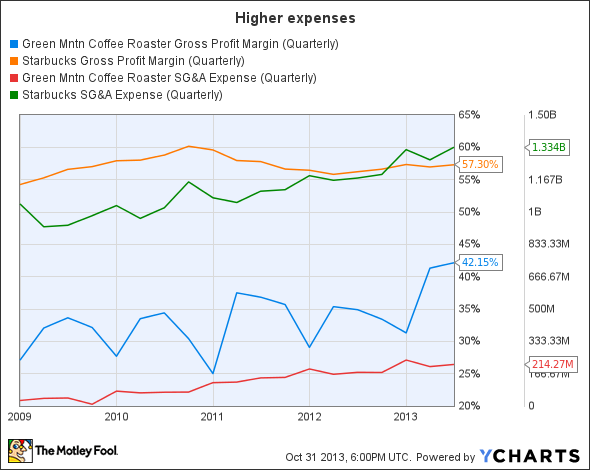 Starbucks might face more margin pressure as it looks to fight Dunkin' Brands (NASDAQ:DNKN). Dunkin' has remodeled its stores to create a more relaxed environment and plans to double the number of its stores within the U.S. to 15,000 in the future (Starbucks has 11,000 locations in the U.S. at present). Dunkin's ambitious moves can help it gain market share.

To ward off competition from Dunkin', Starbucks will need to step up its efforts and roll out more locations, apart from introducing innovative products. This is probably why Starbucks spent $1.2 billion in fiscal 2013; Starbucks intends to devote two-thirds of its capex to renovating its own stores and expanding to new locations.

Even Green Mountain investors need to be cautious. It was expected that the expiration of Green Mountain's patents in September 2012 would weigh on its margins due to stiffer competition in the single-serve coffee market as rivals could also produce K-Cup knock-offs and sell them at cheaper prices. Going forward, this could drag on margins and revenue. However, Green Mountain has plans to keep the growth momentum going.

The way ahead
Green Mountain has a strong pipeline of products. In total, four brewer systems are planned – Hot, Cold, Water, and Specialty.

Within each of these systems, there will be new partners and multiple platforms designed to engage a wide array of consumers. The company plans to develop and launch these systems in the next three years.

One of the biggest beverage categories that Green Mountain plans to enter during fiscal 2015 is the "Cold Beverage" category. The company plans to launch a water brewer and a cold brewer platform. With a host of new brewer systems outlined for development over the next three years, there are growth opportunities to look forward to.

In fiscal 2014, Green Mountain also plans to expand the Keurig system internationally in South Korea, Sweden, Australia, and the United Kingdom, which will see a new Keurig brewer designed especially for these markets in a host of different colors and formats . It is not surprising to find that R&D investment was up 41% during the third quarter as the company prepares to launch new products .

According to the National Coffee Association's 2013 survey, 83% of the adult population within the U.S. drinks coffee, up from 78% last year. In addition, consumption of single-cup coffee has increased to 13% from 4% two years back. Going forward, consumption growth trends indicate that Green Mountain will continue to grow as single-cup-format coffee consumption increases.

However, Green Mountain is not without its share of competitors, especially after the expiration of its two patents. One advantage is its huge network of Keurig coffee-makers and K-Cup single-serving coffee pods built over the years, which makes it difficult for private-label single-portion packs to invade its market easily.

Bottom line
Analysts are also optimistic about Green Mountain's growth, and its earnings are expected to grow at a CAGR of 15% for the next five years. Moreover, at a trailing P/E ratio of 21.69 and a forward P/E ratio of 16.62, Green Mountain isn't too expensive. So, investors who have Green Mountain in their portfolio can continue holding the stock, as it can deliver higher returns in the future.