Exxon sells oil around the world, and its results are not tied to U.S. oil prices like those of many smaller producers, which is one theory as to why it's up today. Another possibility is that investors have finally had a chance to digest Exxon's earnings from last week, which showed that the company increased production year over year for the first time in two years.

U.S. oil prices continue to diverge from the rest of the world as domestic stockpiles grow amid a slowly growing economy with limited export options, weighing on the price of U.S. crude. WTI crude is now at $93.16, down 15% from a high of nearly $110 hit in early September. The international oil price, Brent crude, is down 10% in the same period to $105.70.

The spread between the two has widened significantly since nearly closing this summer. This graph is current as of last week: 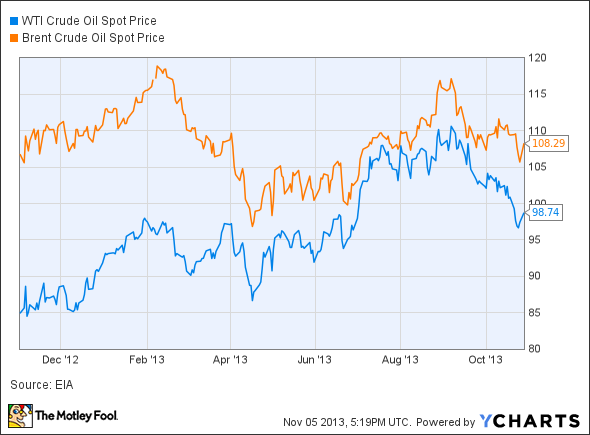 Tomorrow the Energy Information Administration releases its Weekly Petroleum Status Report, which analysts expect will show a 2.1 million-barrel rise in crude stockpiles, excluding the strategic petroleum reserve. U.S. crude stockpiles currently are at 10-year seasonal highs and are less than 18 million barrels away from an all-time high.

Prices will likely continue to fall as growth slows around the world and supplies increase. Currently, world oil supplies are being affected by disruptions in Libya and Iraq, as well as the continued sanctions against Iran. As those end and more supply comes into the oil market, expect to see prices drop. Anything can happen, though, and a disruption somewhere else could easily send oil prices skyrocketing once more.

Falling crude prices are bad news for oil majors, which have to sell at reduced margins. If prices take a steep drop, it would hit producers operating in Canadian tar sands and U.S. shale, as their costs are very high compared to traditional sources around the world.

However, this is good news for U.S. consumers, who can expect to see increased savings at the pump.