Ken Fisher is a famed investor, and the son of investing icon Philip Fisher. Through his best selling book Super Stocks and his track record at his firm, Fisher Investments, Fisher has established himself as a growth stock authority.

In his aforementioned book Super Stocks, Mr. Fisher introduced the investing world to a new valuation metric, the price-to-sales ratio. Since the days of Ben Graham investors had happily measured price against earnings, but never sales.

The results have been impressive. According to Fisher Investments, since its inception stocks chosen following the Kenneth Fisher model have outperformed the market four-fold.

With that kind of performance, you have to believe that price-to-sales is a good way to find quality stocks. Here are a few stocks that look cheap by Mr. Fisher's criteria, and seem to have good prospects overall.

Cheap parts
Some of the cheapest valued stocks, by Fisher's model, are in industries related to autos. Take Goodyear Tire & Rubber Company (NASDAQ:GT), for instance. The company comes in with a ridiculously low P/S ratio of 0.26, and earnings are expected to grow for this tire maker as well. With a price-to-earnings growth ratio of just 0.28, it's clear that the market isn't fully valuing the potential of this auto parts maker.

Low valuations may be a part of the auto parts industry as a whole. Stocks like TRW Automotive (NYSE: TRW), which makes steering and braking equipment, are not in the markets favor right now. TRW currently trades at a P/S ratio of 0.53, making it a high ranking business in Fisher's view.

An automotive disconnect
The low valuation of the auto industry surprises me. Since 2009 auto sales have led the U.S. recovery, so why is the industry discounted on a P/S basis? 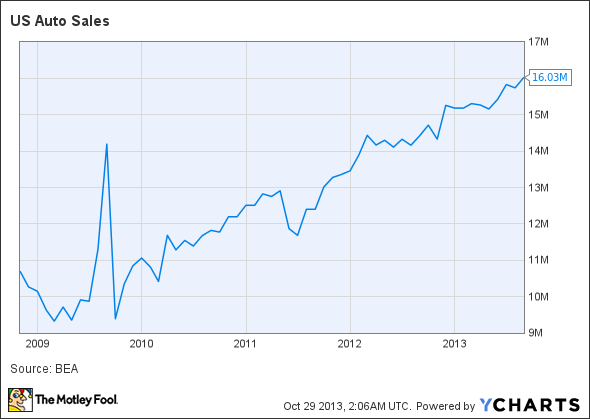 Auto sales have been the largest percentage of U.S. GDP over the past five years, yet stocks like Ford (NYSE:F) and General Motors (NYSE:GM) look cheap by Fisher's model. Ford has a P/S ratio of just 0.46, and GM a scant 0.33, while both companies also have a PEG below 1. It's worth mentioning that U.S. auto sales met most lofty projections in 2012, and they're expected to rise again throughout 2013. So if analysts expect these auto makers to sell and earn more, yet the market is trading them at a discount to sales, who is right and who's wrong?

Trends point to automotive gains
There are a few trends that automotive bulls have working in their favor. Let's start with pent up demand. According to research firm Polk, the average age of all U.S. auto's is 11.4 years, and it's expected to grow 20% by 2018. At some point consumers will need to buy new, and that's bullish for the auto industry.

Older vehicles, and the demand for higher MPG vehicles, should drive auto sales for at least a few years. If these trends pan-out as expected, Ford and GM will sell more cars, which will use technology from TRW and Goodyear, for years to come.

Price-to-sales: an intriguing starting point
If you look at Ken Fisher's track record, it's hard to argue that the p/s ratio is a great starting point for stock picking.  It may also be more relevant right now than ever, because so many companies seem to be growing EPS through cost cutting (even as sales stay flat).

That said, like all metrics, Ken Fisher's "screener" is just a starting point. Perhaps these stocks have remained undervalued, compared to their revenues, due to the lingering stigma of the great recession. However, before buying any stock, make sure you do additional homework.